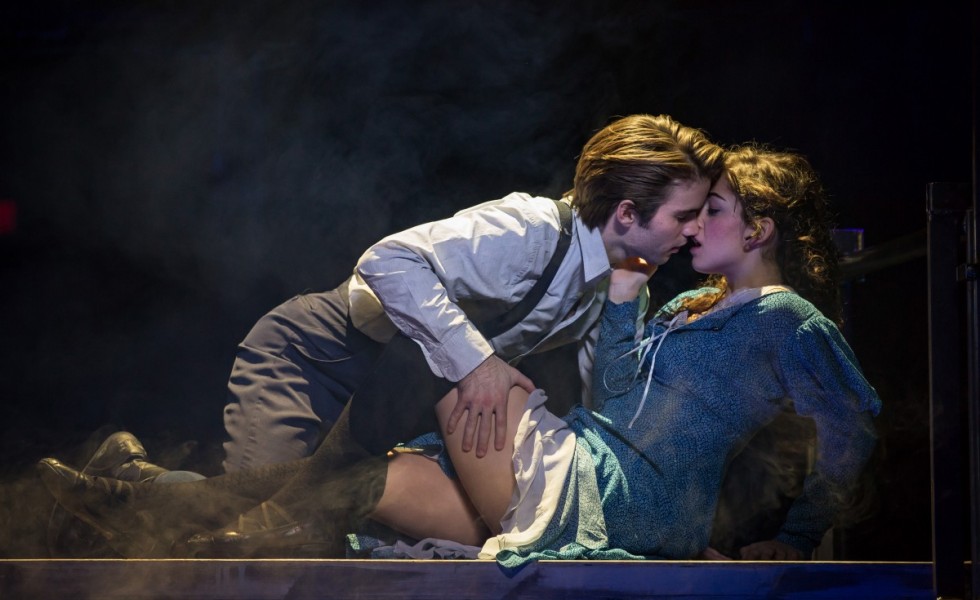 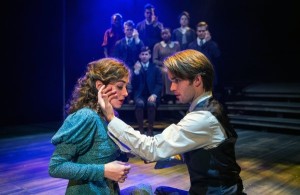 Director and choreographer, Aaron Thielen, certainly had his work cut out for him. Staging the 2006, eight time Tony Award-winning musical, Spring Awakening, in the round for an abbreviated three week run. This experiment of sorts hopes to expand Marriott’s audience beyond its customarily older subscriber base. This limited run production, certainly outside the traditional repertoire (up next for Marriott, Sister Act and Evita) with its R rating, contains subject matter including teen-age burgeoning sexuality, masturbation, incest, suicide and abortion. Not your typical musical theater fare. Pop star turned composer, Duncan Sheik, joined with book and lyric writer, Steven Sater, to update the 1891 controversial Frank Wedekins’ play, set in rural Germany. Awakening soars with its rock and role score and edgy and frank portrayals of teen-aged sexuality. Shrewdly casting top emerging talent in the Chicago theater scene in the chorus, including Garrett Lutz, Caleb Baze, Tiffany Tatreau and Callie Johnson, this hot Spring certainly helps to thaw the Midwest winter’s cold. 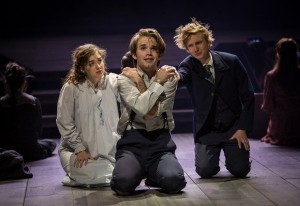 The main story centers around a triangle of friends, Melchior (boyishly handsome Patrick Rooney) the clever and insolent leader, Moritz (Ben Barker) a lad who just can’t keep up with his peers academically and Wendla (Eliza Palasz) the beautiful and inexperienced girl next door, strongly attracted to Melchior, but completely unaware of what her feelings actually are. When she asks her mother to explain where babies come from, her mother sheepishly half-answers her questions, while Wendla’s face is covered by an apron. Alas, there was no Planned Parenthood around in 1891 Germany. Schoolmate, Hanschen (Brian Bohr) uses his jaunty good looks to seduce a male classmate as well, although here the deal is sealed with just a simple, quick kiss. The teens of Spring Awakening are ill-served by the repressed adults who surround them, from parents to teachers, and the teens end up penalized for the deficiencies and inadequacies of their education. Sadly, this tale is just as relevant today as it was when the play was originally written. MTV’s popular hit show, Teen Mom, a real world example of the atrocities that occur due to a fundamental lack of legitimate sexual education. As if puberty isn’t universally uncomfortable enough, the sexual repression of the strict and unforgiving time and ridged society ends in calamity for all involved. “Men, they can’t stick you with one thing, they’ll try to stick you with another” is the best attempt at warding off unwanted advances of the opposite sex. Both Kevin Gudahl and Hollis Resnick play the array of adult roles here, from parental units to school scholars. The old adage, “it takes a village to raise is child” is on display through the characterizations of these two talented performers. 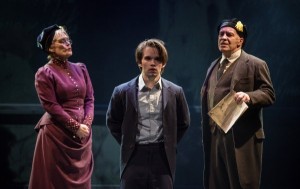 Unique to this staging, the cast utilized hand held microphones when singing the edgy, pop rock soundtrack. With song titles like “The Bitch of Living,” “The Word of Your Body” and “Mama Who Bore Me,” this angst filled performance style only enhances the material, as though a half dozen Kurt Cobain’s, Alanis Morrissette’s and Courtney Love’s are rocking out, center stage. Tom Ryan’s blunt set design, with its almost criminal, vertical metal bars, mimics the prison of the times this cast unsuccessfully rebels against. Susan Hilferty and Nancy Missimi costume design, illustrates the classic period with multiple modern day influences throughout. The over the knee stockings worn by Wendla were similar in style to 1990’s teen pop princess, Britney Spears, another young lady who pushed sexual boundaries in a quest for commercial success. Lee Liskness stark and isolating lighting design enhanced the proceedings as well.  Musical supervisor Patti Garwood conducts an orchestra, usually hidden at the Marriott, this time bookending both sides of the stage. If they are going to break tradition, they are breaking all of them. 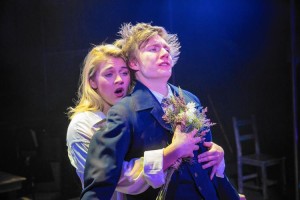 I commend the Marriott for their out-of-the-box staging of this unconventional Broadway hit. The sexuality depicted on stage may raise a few eyebrows, but it is quite chaste in comparison to what was actually staged on the Great White Way back in 2006. The talented troupe commits unabashedly to the material. For that, I commend all involved. It remains to be seen how the 30,000 plus suburban season subscribes will react. I chatted with the woman seated next to me at intermission, and she appreciated the daring story telling.  Her exact words “I have never seen anything like this ever put on here. I am loving it.” Then, on the way out the door, I ambled behind two older subscribers both shaking their head in apparent disgust. To each their own. Art is meant to provoke and to challenge the viewer. In that, Spring Awakening is a titillating triumph.

Spring Awakening is currently playing at the Lincolnshire Marriott Theatre through January 31, 2016