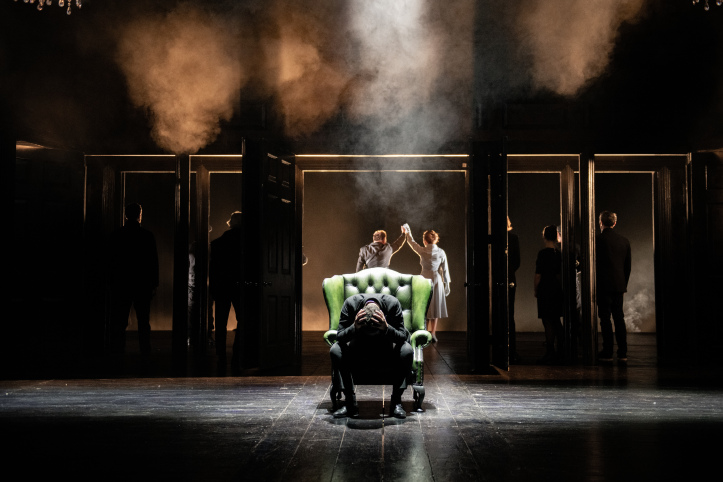 The ensemble (Ruth Negga in the green chair). Photo by Teddy Wolff.

Moving in like a heavy ghost, the dark red wood of the grand hall vibrates with an intensity of claustrophobic dread.  Seeping in through the smoke of incense burning strongly, the chanting ritual of Shakespeare’s Hamlet arrives with power and startling clarity, courtesy of the Gate Theatre Dublin, to the equally grand hall of St. Ann’s Warehouse.  A silent scream of pain and mourning chimes in demanding the textual apparition/illusion that is more than fantasy to stay and devastate our hearts with this famously clear portrait of indecision and funerial heartbreak. This is a grieving Hamlet of deep passion and angry momentum, embodied in every twitch and twisted snarl by the magnificent Ruth Negga (Old Vic’s Playboy of the Western World), who was so achingly beautiful in the tender film, “Loving“. This wildly talented Ethiopian/Irish acting presence gives blood and guts to the young son of a dead King (Steve Hartland) with such clear crushing pain. And as the chandeliers descend and the armchair of power is pushed into place, this magnificent production radiates a knowledge of the text that elevates an understanding and deepens the love for The Tragedy of Hamlet, Prince of Denmark.

It’s the longest of Shakespeare’s play, with 30,557 indispensable and memorable words (and phrases). Clocking in at three and half hours (with one intermission), the time flies with that ‘edge of your seat’ energy, even as we sit knowing the murderous scandals that lie ahead. Directed with a precise understanding of cold blooded “murder most foul“, director Yaël Farber (Signature’s Boesman and Lena) draws us into the cloak of death that sits squarely and most assuredly in the dark-circled eyes of those hoovering watchers, players, gravediggers and undertakers of this mission, embodied by Will Irvine (MAC’s Abigail’s Party), Gerard Kelly  (Everyman’s Evening Train), Gerard Walsh (Gate’s Waiting for Godot). They see all and wait patiently for the outcome of the hesitating yet calculated revenge plot, spilling the dirt from the earth wide, while pulling in all the desirous reasoning of Hamlet’s passion and pain. No one remains clean, not the hardened stern mother and Queen Gertrude, played impressively strong by Fiona Bell (Abbey’s Three Sisters), nor the loving and grief stricken figure of Laertes, played passionately by the striking Gavin Drea (Gate’s Tribes), son of Chief Counsellor Polonius, most wisely played foolish by the wonderful Nick Dunning (West End’s The Home Place).

But the twisted dark heart of the matter lays at the feet of the devious uncle and now King, Claudius, played wickedly regale by the powerful Owen Roe (Gate’s The Father). He has seeped into power like the demanding light from behind the many closed doors, shoving most forcibly Hamlet’s father into the grave, and proclaiming him to haunt from beyond and behind the ghostly white curtain. He devilishly engages all around him with his greedy false touch, turning Hamlet’s friends; Rosencrantz (Barry McKiernan) and Guildenstern (Shane O’Reilly), into spying enemies, but isn’t able to reach the good hearted Horatio, beautifully embodied by the handsome and valiant Mark Huberman (Druid’s Shelter).

Standing alongside watching and waiting is the young Ophelia, the nervous Irish “green girl” dutifully adorned, played most delicately by the powerfully wise Aoife Duffin (Young Vic’s Blood Wedding). Drenched in need and desperation to understand her Hamlet, the two entwined actors fill in the spaces of the unknown and the unclear with startling precision. I’m forever perplexed by Hamlet’s overheard demolishing of Ophelia’s sense of self in the library, but it resonates in Negg’s delivery. It never really becoming maddingly clear as to the reason for this highly fraught entanglement, but it certainly is the fateful push that sends her to that watery edge of sanity and reason. She’s forever surrounded with players that are leading her to her grave, and although the walk through the rain seems excessive, as it is only used once and for such a short time, the drenching goes deep below the skin’s surface, and fills her heart heavily, like stones in her Virginia Woolf pockets.

As the undertakers dutifully, and most brilliantly inventive, teach her the tune of insanity, the unpacking of my heart with her words surrounds us.  Carrying the Irish brogue proudly, the cast as a whole gives the square space, beautifully crafted by Susan Hilferty (Broadway’s Wicked), an elusive strength. It’s tense with dignity, accentuated majestically with dynamic backlit shadows cascading in from the many door frames by lighting designer John Torres (Public’s A Bright Room Called Day) and highlighted by the compelling work of composer and sound designer Tom Lane (Abbey’s Twelfth Night). This Dublin infused Hamlet rises above almost all others with it’s visual scope and devastating descent into the emotional words and the detailed text. With our mourning state of loss “easier played than a pipe“, this Hamlet cannot be played nor thought of as anything but severely impressive and utterly brilliant. It shines it’s wise and sideways light on the heart of the matter, and succeeds like no other. Go see it, if you can.