Stealing With Style The Robber Bridegroom

Stealing With Style The Robber Bridegroom 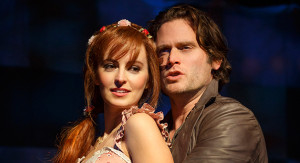 I never would stand here

And lie in your face

That’s exactly how it happened

Once upon a Natchez Trace 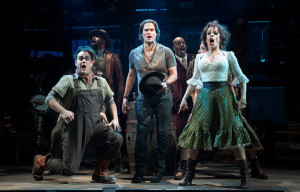 When you grow up with a musical, loving it’s score, remembering it through the eyes of an eight year old, when you see the show again as an adult, your tastes have changed. That is the case with the revival of The Robber Bridegroom. I saw the show at The Mark Taper Forum and feel in love with the book and lyrics by Alfred Uhry (Driving Miss Daisy, Parade), the music by Robert Waldman, based on a Southern Gothic tale by Eudora Welty. Kevin Kline and Patti LuPone stared in the John Housman production and the song “Sleepy Man” was a musical theatre classic. 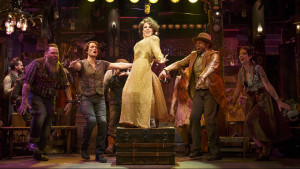 Here newly made TV star Steven Pasquale plays Jamie Lockhart a bandit with two faces. When he rescues Clemment Musgrove (Lance Roberts), from Little Harp (Andrew Durand) and his brother, Big Harp (Evan Harrington), a disembodied head stuffed into a trunk, Musgrove invites him to romance his greatest treasure, his daughter, Rosamund (Ahna O’Reilly). Jamie is also The Bandit Of The Woods when his face is stained with berry juice. Rosamund meets him when he steals her dress and later on her virginity. Musgrove’s embitter second wife, Salome (Leslie Kritzer), plots Rosemund, demise. She hires a dim witted boy named Goat (Greg Hildreth) to kill Rosemund, but he fails to do so. Rosemund has fallen for the bandit so when Jamie comes a calling she acts crazy. When she returns to the bandit her heart full of love, he explains how she has taken all the fun out of it and how he prefers to steal it. Lovers fight and come back together, after all this is a tall fairy tale.

Mr. Pasquale, melts the audiences hearts with sex appeal, rakishly good looks and superb vocals. Ms. O’Reilly is a competent actress, has chemistry with Pasquale, but her voice is not powerful enough on her numbers. Who steals the show here is Leslie Kritzer, whose zaniness is over the top, madcap and fun loving.

Alex Timbers brings to mind Paul Sills Story Theatre or Fractured Fairytales. Much of the show is raunchy, with nudity and a lot of playfulness. Think Heehaw meets Dogpatch. Not only is there a five-piece band of musician’s on stage, but the sound effects are mostly done by the cast.

I really enjoyed the delightful caveman set by Donyale Werle, and mood lighting by Jake DeGroot.

The show oddly enough is highly misogynistic. Rosamund solicits the robber’s advances. She loves doesn’t mind being his mistress, knowing he is about to marry someone else, or that he would rather have nonconsensual sex. In the original, the robber knocked out Rosamund dead cold before he could make love to her and leaves her pregnant. Salome, is tied up in a burlap sack and slammed all over the stage. Not exactly “correct” in this politically charged climate.

Suzanna BowlingAugust 1, 2022
Read More
Scroll for more
Tap
Joan Rivers: Exit Laughing To Premiere On New York’s Thirteen April Fools Day (April 1)
Hold On to Me Darling or Even Stars Get The Blues