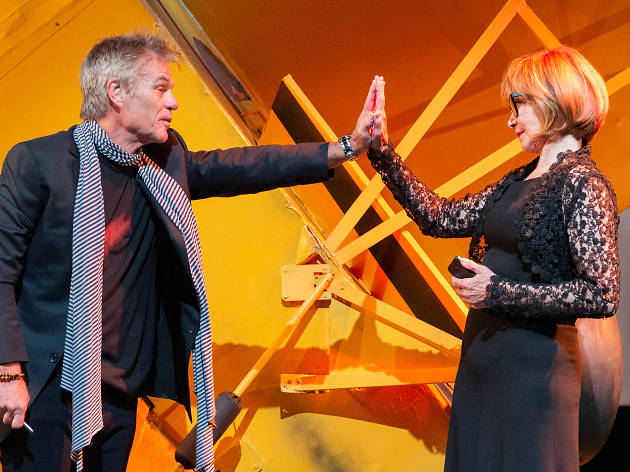 Stephanie Power and Harry Hamlin try with all their might to take flight in Joshua Ravetch’s play One November Yankee, a dramedy about three sets of siblings who try to communicate and connect with an assortment of results. Kicking around since 2012, it is surprising that the Delaware Theatre Company has brought this show back.

Joshua Ravetch also directs this two hander, which revolves around a plane crash. The title refers to the call letters of a crashed yellow Piper J-3 Cub airplane (wonderfully designed by set designer Dana Moran Williams). The first scenario involves the plane being recreated by Ralph, who is being given the chance of a lifetime by his critical sister Maggie. Not a fan of his work, Maggie finding his art incomprehensible, however she is allowing him to be reviewed at MoMA by the Times. We then meet Margo who crashed the plane five years prior, in which Ralph’s instillation is based on. Incompetence has led to Harry becoming hurt, due to her negligence. Siblings Mia and Ronnie find the plane, a week before the opening. In doing so they come to terms with an older brother’s death in a plane crash 22 years prior. Coming full circle Ralph’s art debut, has positive results as Maggie reads The Times review. As she leaves Ralph discovers a negative review, as a ghost from the past morns her loss.

Hamlin and Powers play all three sets of middle-aged siblings. Having both started their careers onstage, they are best known for their film and television work. Both look radiant and Hollywood perfect. For those attending this play to see these two in the flesh, you will not be disappointed. Powers captures the coldness in Maggie that turns to warmth and vulnerability in Margo and Mia. Hamlin is charming and does the best he can with Ravetch’s dialogue, that seems to meander.

Though sibling rivalry hits home with a lot of people Ravetch, is not a good director and the show sinks into the mire of rambling dialogue that keeps this play in a holding pattern.

One November Yankee: Produced by the Delaware Theatre Company at 59E59 Theatre until Dec. 29th