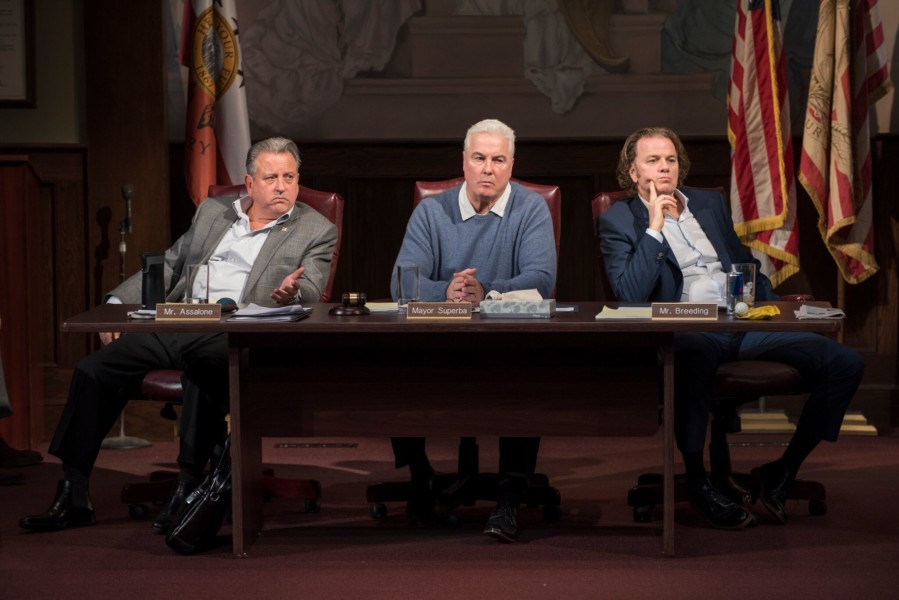 Steppenwolf and Tracy Letts’s The Minutes – Politics As Blood Sport

Steppenwolf and Tracy Letts’s The Minutes – Politics As Blood Sport 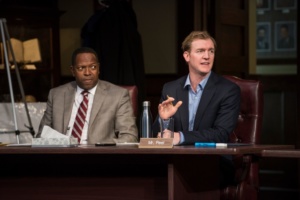 Debuting his seventh play produced at Steppenwolf, headed to Broadway in the spring of 2018, Pulitzer Prize-winning author, Tracy Letts’ The Minutes ensemble-driven world premiere dark comedy exists in a world of small-town politics. A world that the liberal news media so grossly miscalculated during the last national election cycle. This explosive 100 minute pot-boiler holds a microscope to just how and why American history has been created, defined, crafted and, at times, manipulated. Director Anna D. Shapiro has assembled an A list of eleven Steppenwolf ensemble members bringing these characters to life including William Peterson, Kevin Anderson, Ian Bedford, Francis Guinan, James Vincent Meredith and Sally Murphy. At the crossroads of truth, corruption and self-interest in governmental proceedings, The Minutes takes less than an hour before the cast is engaged in a ruthless struggle, both metaphorically and quite literally, of political gamesmanship, revealing  the rotted underbelly of small-town American politics. This satirical and searing production opens an uncomfortable dialog about the use and (potential) abuse of governing bodies that  truly engrosses while it entertains, well up to its shocking and unsettling finale. 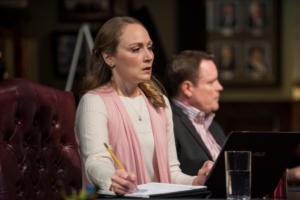 Set on a nondescript rainy November night in small-town Big Cherry, USA, we open as the cast slowly arrives to participle in their routine municipal maneuverings. Holding court, Mayor Superba (William Peterson) a measured, stoic man, not unlike Mike Pence in appearance and with the commanding power of the deciding vote. He surrounds himself with a team of nine eccentric council men and women. In no particular order we meet Mr. Hanratty (Danny Mccarthy) whose accessibility proposal is on the evening’s primary agenda, that is in-between his nervous itching and swatting at ants he swears are crawling all over him, old-time members Mr. Oldfield (Francis Guinan) and Ms. Innes (Penny Slusher) who comically bicker back and forth, like a long suffering married couple.  His habitually showering her with spittle while passionately speaking about his pet causes, including who gets the nearby, recently vacated parking spot, left everyone in stitches. Ditsy and scattered Ms. Matz (Sally Murphy) whose instinctive response to conflict is to hide under her desk, arrives late as does Mr. Blake (James Vincent Meredith) the lone person of color on this committee, with his own passion project, a smack down wrestling tournament featuring a character dressed like Honest Abe Lincoln. Ah, the perilous responsibilities required of small-town government. 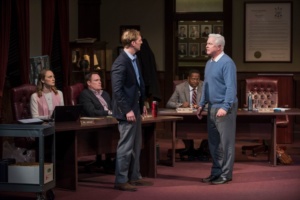 Shaking things up, newly elected councilman, Mr. Peel (Cliff Chamberlain) whose idealism and inquisitive nature unsettles the very foundation of this group. Having missed the prior meeting due to a death in his family, Peel’s innocent request to review the group’s previous meeting “minutes” opens a can of worms that truly burns his town’s history to the ground, and the play in the progress. Not that his simple request is met with affable ease. Corruptible Mr. Assalone (Jeff Still) and the self-serving Mr. Breeding (Kevin Anderson) block Peel’s requests at every turn. Caught in a technicality loophole within a longstanding city council ordnance, town clerk (a fantastically wry Brittany Burch) then reads those minutes aloud, detailing the shocking and scandalous truths behind the mysterious and immediate resignation of Mr. Carp (Ian Barford). In this 11th hour character reveal, Carp’s hell bent on ripping a band-aid off the masked, ugly truths about this small-town’s illusive history, which I have absolutely no intention of spoiling here. 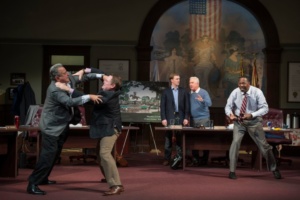 Helping to create the world that encapsulates this disturbing indictment, David Zinn’s impressive set design. With large figures painted in the background, portraits sitting in astute judgement over the proceedings, the singular city council chamber is the play’s full set. It would be impossible not to compare the visual of the cast sitting at their large tables, onstage the entire duration of the performance, to that of Da Vinci’s “The Last Supper” painting, William Peterson sitting Christlike in the center. His surrounding Apostles betraying their constituents that voted them into power at every turn. Ana Kuzmanic’s real world costuming, muted neutrals in tones of grey, taupe, subtle blues and navy, hiding all of the red hot secrets, ever-burning, just beneath each character’s surface. Brian MacDevitt’s subtle lighting techniques, mimicking lighting outside, while the real storm brews uncontrollably inside, impressed. 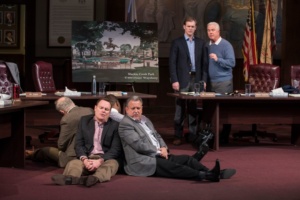 The political and cultural battles at the heart of Steppenwolf Theatre Company’s latest, The Minutes, engages until its very unnerving ending. Purposely pointed and corrosively provocative, Tracy Letts’ latest makes no apologies while pulling its appropriate and power-driven punches. Bringing a haunting and evocative new visual to the expression “if you can’t beat them, join them.” Judging by the news, this is something a Trump lead America frighteningly knows all too well. While it may be habitual instincts to circle the wagons in times of trouble, this knee-jerk reaction is not always the best option or in the best interest of those steamrolled over in the name of progress. Make a date for Lett’s latest. The Minutes will stay with you hours after the curtain falls.

Tracy Letts’ The Minutes at Steppenwolf Theatre Company is now playing through January 7, 2018