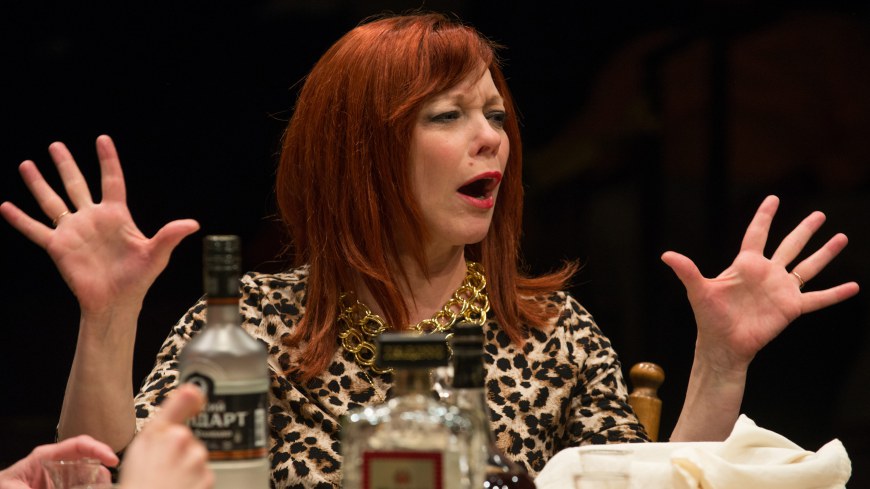 Steppenwolf at the Guggenheim

Steppenwolf at the Guggenheim

Suzanna Bowling
On Monday, September 26, 2016 at 7:30pm, Works & Process at the Guggenheim presents a discussion with the creators and excerpts of Steppenwolf Theatre Company’s The Fundamentals by Erika Sheffer prior to the play’s world premiere on November 10.

A Steppenwolf commission, The Fundamentals explores America’s corporate culture through its main character, Millie, a resourceful young mother and housekeeper at a New York luxury hotel. When an opportunity in management gives her the chance to leave her blue-collar life behind, she is faced with how much, and who, she is willing to sacrifice. Cast members will perform excerpts from the play, and playwright Erika Sheffer and director and Steppenwolf ensemble member Yasen Peyankov will illuminate a behind-the-scenes look at the play’s production in a discussion moderated by Julian Sheppard.

https://www.guggenheim.org/event/steppenwolf-the-fundamentals
Erika Sheffer’s playwriting debut, Russian Transport, was produced at The New Group (Outer Critics Circle nomination) and Steppenwolf. She is a recipient of The Vineyard’s Paula Vogel Playwriting Award. Her plays have been developed at The New Group, The Vineyard, and Primary Stages. Erika has performed original pieces at Upright Citizens Brigade and Dixon Place. She is a member of SPACE on Ryder Farm’s Working Farm and Ars Nova Playgroup 2015/2016. BFA in Drama from Syracuse University.
Yasen Peyankov has been a Steppenwolf Theatre Company ensemble member since 2002 and last appeared in The Wheel. Steppenwolf directing credits include Between Riverside and Crazy, Grand Concourse,Hushabye, Russian Transport, as well asThe Glass Menagerie for Steppenwolf for Young Adults. Yasen also directed the Bulgarian premiere of August: Osage County at the National Theatre in Sofia, Bulgaria. Other directing credits include Uncle Vanya, Stars in the Morning Sky, Macbeth, Roberto Zucco, Go Away Go Away, Slavs! (European Repertory Company); Overweight, Unimportant, Misshape: A European Supper (Trap Door Theatre); and Ladybird (Rushforth Productions) among others. On stage he has also appeared in productions at Goodman Theatre, Court Theatre, European Repertory Company, Next Theatre Company, Seattle Repertory Theatre, American Conservatory Theatre and made his Broadway debut in Superior Donuts in 2009. Film and television credits include A Very Harold and Kumar Christmas, Contagion, Transformer 3, Crime Fiction, The Company, The Mob Doctor, The Beast, Gifted Hands, Karen Sisco, Alias, The Practice, The Unit, Numb3rs and others. He has translated and adapted Russian plays by Anton Chekhov, Mikhail Bulgakov, Nikolai Kolyada, Alexander Galin and Vassily Sigarevall. His translation of Chekhov’s Ivanov, was produced by European Repertory Company and was published by Ivan R. Dee. He is the recipient of a Joseph Jefferson Award, Fox Fellowship and serves as the Head of Theatre in the School of Theatre and Music at the University of Illinois at Chicago where he teaches acting and directs.
Steppenwolf Theatre Company is America’s longest standing, most distinguished ensemble theater, producing nearly 700 performances and events annually in its three Chicago theater spaces-the 515-seat Downstairs Theatre, the 299-seat Upstairs Theatre and the 80-seat 1700 Theatre. Formed in 1976 by a collective of actors, Steppenwolf has grown into an ensemble of 46 actors, writers and directors. Artistic programming includes a seven-play season; a two-play Steppenwolf for Young Adults season; Visiting Company engagements; and LookOut, a new multi-genre performance series. While firmly grounded in the Chicago community, nearly 40 original Steppenwolf productions have enjoyed success both nationally and internationally, including Broadway, Off-Broadway, London, Sydney, Galway and Dublin. Steppenwolf has the distinction of being the only theater to receive the National Medal of Arts, in addition to numerous other prestigious honors including an Illinois Arts Legend Award and 12 Tony Awards. steppenwolf.org.
For over 31 years and in over 400 productions, New Yorkers have been able to see, hear, and meet the most acclaimed artists in the world, in an intimate setting unlike any other. Works & Process, the performing arts series at the Guggenheim, has championed new works and offered audiences unprecedented access to generations of leading creators and performers. Each performance takes place in the Guggenheim’s intimate Frank Lloyd Wright-designed 285-seat Peter B. Lewis Theater. Described bythe New York Times as “an exceptional opportunity to understand something of the creative process,” Works & Process is produced by founder Mary Sharp Cronson. worksandprocess.org.
Related ItemsErika ShefferGuggenheimJulian SheppardNewSteppenwolf Theatre CompanyThe Fundamentals
Events