Stepping Out With the Clients of Step Forward Entertainment 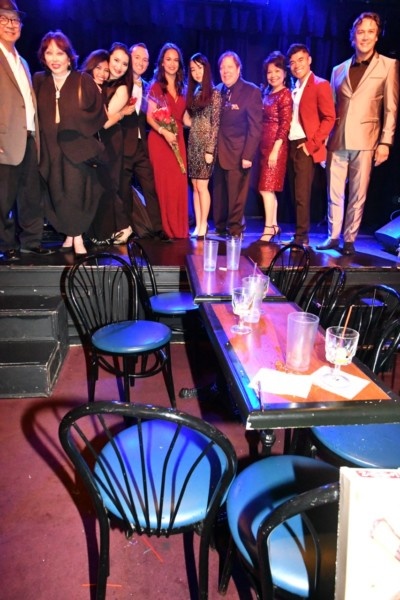 Stepping Out With the Clients of Step Forward Entertainment

Manager Robert R. Blume again brought his clients Kea Chan, Pat Labez, Anthony Salvador Lewis, Justin Senense, Violet Vang and Xiaoqing (Mao) Zhang to perform. This time the venue was The Triad and the vocalists were accompanied by musical director and pianist Bobby DeLeon. Charlie Romo was the host for this round, as he entertained, showing us what a talent he is.

The show started off with a group number of “Stepping Out with My Baby” into host Charlie Romo singing “Tonight” and “Just In Time”.

Following up newcomer to singing Pat Labez brought “Dream A Little Dream” and “Can’t Take My Eyes Off You” to the audience.

14 year old Violet Vang gave us “In My Dreams” from Anastasia. This 14 year old has a powerful instrument.

Justin Senense sang “I Chose Right” from Baby. The highlight of the show was when Justin joined Mao with “One Second and a Million Miles” from The Bridges of Madison County. The amazing Xiaoqing (Mao) Zhang not only sings gloriously, but plays an exquisite violin.

Celebrating her 21st birthday AJ Muntz straight from London gave us “Make You Feel My Love,” while Bobby Deleon provided an “Instrumental Medley,” Kea Chan popped out with “Natural Woman” and Anthony Salvador Lewis gave us a sexy medley of “I Write the Songs,” “I Can’t Smile,” ‘Lady,” “Love on The Rocks” and “Sweet Caroline.”

Mao was back wowing us with a jazzy and vocally thrilling “Hit Me With A Hot Note.”

Dueting and showing us love, Charlie Romo and Kea Chan brought us “If I Ruled The World”

Pat and Anthony brought back “Love Is Strange.”

The wonderful Mao and Violet came together for “Movie In My Mind.” Kea switch love partners and took to the stage with Justin for the romantic “Sun and Moon.” Finishing off a well done medley of Miss Saigon, Kea joined Violet on “I Still Believe”.

Marya Coburn is like a producer and mother to these young artists. Marya was a successful film and TV actress with Frank Sinatra, Jon Voight, Robert Conrad, Yul Brenner and more. She was a dancer with Bob Fosse and was in the show Sweet Charity. Kissed by Elvis Presley in the film “Stay Away Joe”, Marya discovered singing late in life and entertained us all with “New York New York.”

As the night ended Charlie was back with “On The Street Where You Live”, as the cast joined in to show their “L-O-V-E.”

A good time was had by all as this highly entertaining show introduced us to the stars of the future.

All video by Jonathan Furshpan