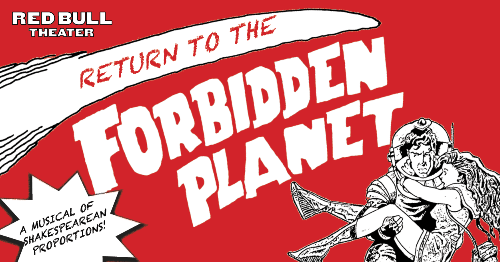 Exploding with over thirty cosmic hits of classic rock-n-roll, and playfully based on The Tempest and the cinematic sci-fi classic, this fun-filled musical rockets Shakespeare’s beloved characters from stage to space as Captain Tempest crash lands on the planet D’Illyria, inhabited only by the mad scientist Doctor Prospero, his daughter Miranda, and their trusty robot Ariel. With songs including “Great Balls of Fire,” “Shake Rattle and Roll,” “The Monster Mash,” and “Good Vibrations” along with some of Shakespeare’s most iconic phraseology catapulted through hyperspace into a campy concoction, this is a rare opportunity for today’s New York audiences to experience this Olivier Award-winning musical.

“Out of this world! Prepare to blast off with this musical space odyssey of Shakespearean proportions. With an interstellar cast of musical/classical theater superstars singing some of the catchiest songs ever recorded and having the time of their lives in a script full of hilarity and fun, this promises to be a night to remember, and a fabulous way to kick off our exciting 2019-’20 season,” said Mr. Berger. “Not too low-brow for Shakespeare scholars, and not too high-brow for Trekkies or ‘50s Sci-fi aficionados, Return to the Forbidden Planet is sure to delight.”

Gabriel Barre is best known for creating original musicals. His work has been seen on Broadway, throughout the United States, and internationally. Gabriel directed the Broadway production of Amazing Grace which also toured the country and enjoyed a sit-down production at the new Museum of the Bible in Washington, DC. He is well known for his Off-Broadway work: he directed the original production of Andrew Lippa’sThe Wild Party at the Manhattan Theatre Club starring Idina Menzel, Taye Diggs, Brian d’Arcy James, and Julia Murney, garnering the Calloway Award for Best Direction, as well as five Outer Critics Circle Award nominations and thirteen Drama Desk nominations, both including Best Direction of a Musical. He directed the original production of John Cariani’s Almost Maine at the Daryl Roth Theatre. Other Off-Broadway productions include the original productions of Summer of ’42, Honky Tonk Highway, Stars in Your Eyes, Andrew Lippa’s john & jen, and Son of A Gun. Nationally, he directed the US national tour of Rodgers + Hammerstein’s Cinderella starring Eartha Kitt, which performed at Madison Square Garden; it toured the US for three years. His concert work includes the American Songbook Series at Lincoln Center three years in a row, several Musical by the Year concerts at Town Hall, the concert version of Pippin for World Aids Day, and The Four Seasons at Lincoln Center. Most recently he directed a concert of The Scarlet Pimpernel at Lincoln Center.

The performance will begin at 7:30PM. This is an important intergalactic fundraiser for Red Bull Theater. Proceeds help to make all of its programs possible. Tickets for this benefit event will be $49-$300 (most tickets include tax-deductible donation).

Red Bull Theater, hailed as “the city’s gutsiest classical theater” by Time Out New York, brings rarely seen classic plays to dynamic new life for contemporary audiences, uniting a respect for tradition with a modern sensibility. Named for the rowdy Jacobean playhouse that illegally performed plays in England during the years of Puritan rule, Red Bull Theater is New York City’s home for dynamic performances of great plays that stand the test of time. With the Jacobean plays of Shakespeare and his contemporaries as its cornerstone, the company also produces new works that are in conversation with the classics. A home for artists, scholars and students, Red Bull Theater delights and engages the intellect and imagination of audiences, and strives to make its work accessible, diverse, and welcoming to all. Red Bull Theater believes in the power of great classic stories and plays of heightened language to deepen our understanding of the human condition, in the special ability of live theater to create unique, collective experiences, and the timeless capacity of classical theater to illuminate the events of our times. Variety agreed, hailing Red Bull’s work as: “Proof that classical theater can still be surprising after hundreds of years.”

Red Bull Theater has produced 19 Off-Broadway productions and nearly 200 Revelation Readings of rarely seen classics, serving a community of more than 5,000 artists and providing quality artistic programming to an audience of over 65,000. The company’s unique programming has received ongoing critical acclaim, and has been recognized with Lortel, Drama Desk, Drama League, Callaway, Off Broadway Alliance, and OBIE nominations and Awards.

For tickets and more information about any of Red Bull Theater’s productions and programs, visit www.redbulltheater.com.