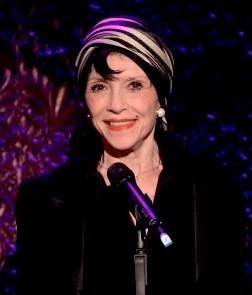 Steven Minichiello, long-time friend of Liliane Montevecchi, is hosting a special memorial for the beloved actress on Monday, July 9th at Gotham Hall (1356 Broadway at 36th Street).  Visitation will be from 11:30 to 1pm; a service will be held at 1pm with a champagne reception to follow.  Guests to be announced.

The veteran stage and screen performer who personified elegant old-world French glamour with an extravagant touch of camp, died June 29 at her home in New York City of colon cancer. She was 85.

Liliane Montevecchi came to Broadway at what should have been the early twilight of her career. At age fifty in 1982, Montevecchi won a Tony Award® for Best Featured Actress in a Musical and a Drama Desk Award for her portrayal of Liliane La Fleur in Arthur Kopit and Maury Yeston’s musical drama, Nine. Seven years later, she returned to Broadway to play Elizaveta Grushinskaya, the ballerina, in Forrest and Wright’s musical adaptation of the film, Grand Hotel. She earned a Tony® nomination that time for her performance.

A native of Paris, Liliane Montevecchi was first a member of Roland Petit’s celebrated dance company before she came to the United States in the mid-1950s and was signed as a dancer to MGM Studios in Los Angeles, appearing in such films as Daddy Long Legs and King Creole (with Elvis Presley). She first appeared on Broadway in 1958 in the musical revue La Plume de Ma Tante, and returned again in 1964 in the cast of the classic musical revue Les Folies Bergères.

The event will be open to the public.

RossJuly 22, 2021
Read More
Scroll for more
Tap
Don’t Miss Tovah Feldshuh as The Queen of Mean at Feinstein’s/54 Below
Meet The Playwrights of NY SummerFest: Charlotte Volage an Award-Wining Writer and Actor