I had been looking forward to seeing Steven Spielberg’s West Side Story since I missed the screening in New York for critics. From the trailer I expected great things, unfortunately I was wrong. There are some positive aspects. First it erased the God forsaken Ivo Van Hove version from my mind. Second the music sounds glorious, from the singing to the orchestrations. Leonard Bernstein’s score has never sounded so crisp and clear. Third I believed the relationship between Maria played by incandescent Rachel Zegler, whose voice is exquisitely powerful and layered with emotion and Ansel Elgort, as Tony, is better than the rumors. The role of Tony is thankless, yet I believed these two as the star crossed lovers. Valentina  played by Rita Moreno, (Anita in the original film) plays the wife of Doc, the owner of the candy store and pharmacy, who is now dead. This is the place where we first meet Tony and the Jets’ hang out. Valentina is there to show us there can be a relationship like Tony and Maria’s, but she comes off as more of someone caught between two worlds. Heating up the screen is the radiant Ariana DeBose as Anita who besides the sound designers (od A. Maitland, Gary Rydstrom, Brian Chumney, Andy Nelson and Shawn Murphy) and Costume Designer (Paul Tazewell) definitely deservers her Oscar nod and the wins she has been receiving. Also well done is the fight scene, which is bloody and believable, but this is a film about love that goes wrong not violence.

Now for what went wrong…..the choreography by Justin Peck. For the resident choreographer of New York City Ballet, ballet is what’s lacking. Where Jerome Robbins choreography was all about length and extension, which gave the feeling of coming out of their skins and soaring, Peck keeps everything low, gritty and to the ground. This is more like 2022 street dance, meets 1961. There is also a lack of emergent energy, The dance at the gym, one of my favorite pieces of dance is not sizzling with teenagers ready to combust with lust of passion. For that matter a lot of the filming, staging and scenes all look contrived, as if we were in the film “LALA Land.” In the scene at the gym is where the film takes one of its many left turns. Like in high school Tony and Maria meet behind the bleachers and the kiss has her being the aggressor. You kinda wonder how could she ever could have snuck back there without being caught sooner. 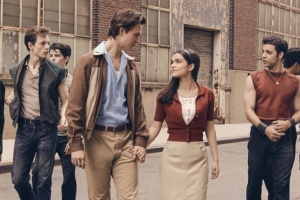 Screenwriter Tony Kushner, gives backstory where none existed before. Tony, is a convict who spent a year in prison. It is never explained, why he disobeys his parole to go to the dance considering the consequences. Maria no longer has just arrived from Puerto Rico for an arranged marriage to Chino. She now works at Gimbels as a cleaner on the night crew and that is where a re-conceived  “I Feel Pretty” takes place. “One Hand One Heart” takes place at the Cloisters. A lot of the songs are rearranged in the order they came and some are given to other characters. Chino, is in night school, studying accounting and adding-machine repair, but longs to be in the gang. A wonderfully subtle performance by Josh Andrés Rivera. 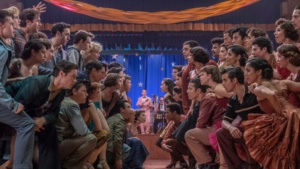 From the dark and dismal lighting where faces and angles are not well lit, to the set like staging that made this film seem more like a high school production, this film comes no where near the the original 1961 film. “Gee, Officer Krupke,” no longer mocks, but while trying to make a political statement falls flat. That is the problem with this “West Side Story” it is just ok, not bad but not great and it certainly does not soar.