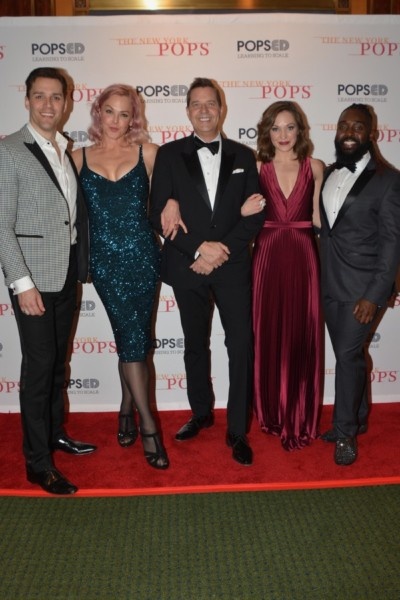 As thier last show of the season, Steve Reineke brought the New York Pops home with Movie Mixtape: Songs from the Silver Screen to life.

Starting off with the iconic theme song of MGM Hooray foe Hollywood from the 1937 film Hollywood Hotel the Pops kicked off the night in grand style.

Mykal Kilgore made his Pops debut with the 1937 “They Can’t Take That Away From Me” from Shall We Dance. How appropriate the it was former Pops conductor Nelson Riddle’s arrangement.

Looking stunning Laura Osnes sang a crystal clear version of “Over The Rainbow” from the 1939The Wizard of Oz.

My favorite performer of the night Storm Large sunk into the lyrics delivering a heartfelt “Man The Got Away” from the 1954 version of A Star Is Born.

The duet of “Moon River” from the 1961 Breakfast of Tiffany’s brought back Laura Osnes and Ryan Silverman.

Laura Osnes proved she would make the perfect maria Von Trapp as she sang the title song from the 1965 hit The Sound of Music.

Showing off his kid side with the “Rainbow Connection” Mykal Kilgore returned to the stage with the award winning song from 1979 The Muppets Movie.

Laura Osnes and Ryan Silverman “(I’ve Had) The Time of My Life” for the 1987 Dirty Dancing.

And were joined by Storm Large and Mykal Kilgore for “Do You Love Me” from the same flick. Ending the second act in an up beat way.

Starting the second act was a fabulous medley of Disney Classics which included the 1946 Song of The South (Zip-a-Dee-Doo-Dah), 1953 Peter Pan (You Can Fly), 1964 Mary Poppins (Chim Chim Cher-ee, Step In Time and Supercalifragilisticexpialidocous), 1951 Alice In Wonderland (I’m Late), 1950 Cinderella (Bibbidi-Bobbbidi-Boo, The Work Song and A Dream Is a Wish Your Heart Makes), “Micky Mouse March” and “It’s a Small World”.

Keeping with the theme Laura returned with “Part of Your World” from the classic 1989Little Mermaid.

Ms. Osnes was join by Mr. Kilgore from the Stephen Schwartz and Kenneth “Babyface: Edmonds “When You Believe” from the 1998 Prince of Egypt.

Storm Larger joined Silver man for 2007 “Falling Slowly” From Once.

I became a huge fan of Storm Large and her impressive stylings as she san the Adele Atkins and Paul Epworth James Bond 2012 classic Skyfall.

I was super Happy hearing Pharrell Williams song from the 2013 Despicable Me followed by the Pasek and Paul anthem from the 2017 Greatest Showman “”This Is Me.”

Make sure you mark your calendars for The New York Pops 36th Birthday Gala Hat Full Of Stars Monday, April 29, 2019 at 7pm

Suzanna BowlingMay 16, 2022
Read More
Scroll for more
Tap
Irish Eyes Are Smiling a Day Early in NYC
The Cake Looks Good but is a Little Under Baked.