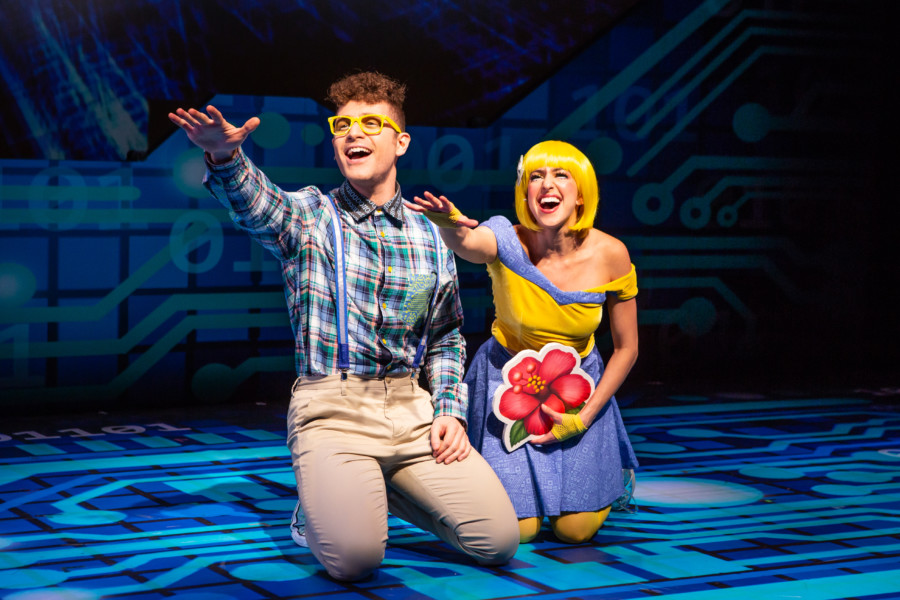 Straight From NYMF: A Big Smiley Face for Emojiland

Straight From NYMF: A Big Smiley Face for Emojiland 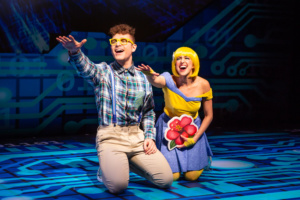 Great musicals are all about emotion. So, too, are emojis…those little digital images we attach to our texts and emails to quickly convey an idea or emotion. If you’ve ever wondered what they would say if they could actually talk, not to mention sing and dance,  now you can find out in Emojiland, the new musical which made a smashing local debut at the New York Musical Festival.

Emoljiland takes us to a world inside a cell phone, where its residents are all emojis.  They are awaiting the arrival of the new software update, version 5.0, and the new emojis who are expected to come with it. This is a world where everyone is defined by how they look, which might not be so different than our world in that respect. I was worried, at first, that this show wouldn’t go beyond that, and give us unchanging, flat characters.  But the very savvy creators of Emojiland, husband and wife team of actor-musicians, Keith Harrison and Laura Nicole Harrison, give us emojis who long to be more than they are, and who inspire us to expand our definitions of self as well.

The nihilistic Skull emoji, a deliciously erudite and villainous Jordan Bolden, quotes Hamletand similarly questions the value of his very existence. Smize (Smiley Face with Smiling Eyes), played with gentle charm by Laura Nicole Harrison, is always sunny on the outside. But she wishes her face could show her real feelings. She is dating Sunny Face with Sunglasses (Cooper Howell), a hip hop hustler who looks cool, but who is two timing Smize with Kissy Face emoji (Chloe Fox, who doubles as the Info Desk) in a very uncool way. Construction Worker emoji (Megan Kane) and Police Officer (Angela Wildflower) are a couple who know how to not just do their jobs but, as their song says, to “Work Together” on a very personal level.

Emojiland is ruled by the spoiled princess icon, played with shameless vanity and brilliant cluelessness by the always entertaining Leslie Margherita. Their world is rounded out by her Guardsmann (Brandon L. Armstrong), Man in Business Suit Levitating (Alex G. Kunz), and Pile of Pooh (Jessie Alagna).

The download of 5.0 brings the Prince (Josh Lamon), a prissy and narcissitic consort for the Princess, and Nerd Face (Keith Harrison), a brainy emoji who knows his tech stuff, but not how to protect himself from evil schemes. Nerd Face also falls for Smize, the only emoji who can see past his nerdy character design.

Everything about this show is smart, hip, funny, and musically masterful. The Harrisons share credit for book, music and lyrics, with Mr. Harrison doing the  orchestrations.  The songs are written and arranged in a wide variety of styles, from 70’s pop to hip hop. Mr. Harrison’s orchestrations capture each one’s unique musical style spot on.   Every song gives a different power house performer a chance to shine. Ms. Margharita is as stitch singing how “The Princess is a Bitch.”  Jordan Bolden’s Skull chills us with “Cross My Bones”.  Mr. Harrison’s Nerd Face helps us see life as “Zeros and Ones.”  Ms. Alagna as Pile of Pooh tells Smize, and all of us, just what to do when life hands you a “Pile of Pooh,” and brings the house down doing it. But it was really Ms. Wildflower’s heartbreaking ballad,  “A Thousand More Words,” which stole the show for me.  This woman has the voice of a true superstar.

The book and lyrics both very successfully manage the difficult task of bringing these little digital critters to life, and engaging us in their journeys. The authors skillfully balance tech imagery and simple human emotion, pulling us in further and further as the story goes along. Even emojis, it turns out, can feel that “It’s Just So Great To Be Alive”, and make us share that feeling with them.

The production design has terrific, tech inspired projections by Lisa Renkel (who also did the wonderfully painterly projected backgrounds for the Festival production of Pedro Pan), a delightful, circuit board inspired set by David Goldstein, appropriately suggestive but never over the top costumes by Sarah Zinn, very clever, illustrated cut out props by Anthony Freitas, and unobtrusive lighting design by  Jamie Roderick. The sound design by Ken Goodwin creates a true concert feel, with a little reverb and a touch of compression, although he does allow the wonderful band under the musical direction of Jonathan Ivie to overpower the singers from time to time. Choreographer Kenny Ingram keeps everyone moving nicely.  Director Thomas Caruso has created a high energy evening of entertainment which never powers down.

Emojiland should simply pick itself up and reopen in another theater as soon as it possibly can. However, musicals with more than half a dozen characters are really financially impossible to do off Broadway. So let’s hope they find the cryptocash to be downloaded to Broadway very soon.