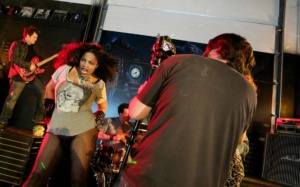 Another option at the New York Musical Festival was a show that proves hard life can be the basis for a tough musical. Bad Ass Beauty The Rock Opera is raw, rough and clearly heartfelt, this project with music by singer/songwriter LaQuinta Prince and Anthony Geminani, lyrics by Ms. Prince, and additional music & lyrics by Stefanie A. Seskin, is a musical portrait of a fictional woman, Aralyn Ford, drawn somewhat from autobiographical elements in the authors’ lives, who has to pull herself through a lot of rough times and abuse to achieve success and self-realization. The show is billed as a “Rock Opera,” but it isn’t sung through. There’s an onstage band, and no set, so it would be better to call this a concert version of a rock musical. The performers, including Ms. Prince, Ms. Seskin and Jameelah Leaundra as a side of Aralyn called “Beauty,” stand on stage throughout the show, but have very little physical interaction.

Ms. Prince has a powerful voice, but she frequently pushes it to extremes that devolve into shouting. It may well be authentic to the character she has created that the lyrics are replete with obscenities. But “what the f…” is really not as profound a statement about life as she seems to think it is, and the number of times it is repeated wears out its welcome. I did enjoy the lovely Ms. Leaundra, who deserves a better vehicle. Ms. Prince certainly has her followers, who were out in force. From their cheering, they clearly had a different opinion of the evening than I did. One could argue that all the rough language and overwrought melodrama  are authentic and necessary to the character Ms. Prince and her collaborators seeks to create, but that character is not one I personally would want to spend another evening with.
Closed
Related ItemsAnthony GeminaniBad Ass Beauty The Rock OperaJameelah LeaundraLaQuinta PrinceNewNew York Musical FestivalNYMFStefanie Seskin
Off Broadway