Straight From NYMF: If Sand Were Stone Slips Away

Straight From NYMF: If Sand Were Stone Slips Away

If Sand Were Stone, a new musical at the New York Musical Festival, tries very hard to hold to hold on to its audience. Similarly, its central character, a middle aged woman named Billie, played with great warmth and quiet charm by Trish Lindstrom, struggles desperately to hold on to her life and mind as she battles fast onset Alzheimer’s Disease. However, like Billie, this show lacks the means to save itself. 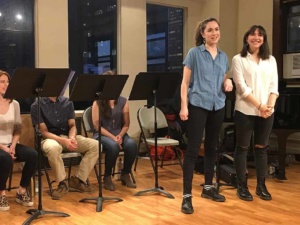 Protagonists in the musicals we love normally drive the stories with their needs and their deliberate actions. We celebrate with them when they finally achieve their goals. So it’s really a Quixotic mission to try to build a successful musical around a central character who becomes progressively more withdrawn, inarticulate, inactive, and then dies. If that’s what you want to do, you could write a parody called Alzheimer’s: the Musical, in which everybody forgets what they wanted to sing during the opening number and we get to go home after two minutes. It would be kinder to everybody. 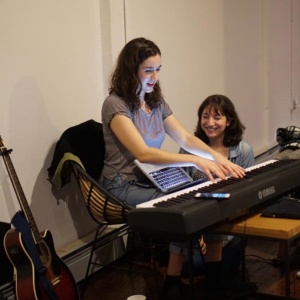 But what you could build a good musical around are the changes which must occur in the people who surround and care for the character who is slipping away from them. In this story, those characters include Marvin, Billy’s supposedly loving but unfaithful husband, played with quiet dignity by Jonathan Christopher, his mistress, Tracy, played by Tracy McDowell doing the best she can with what she has been given and Billie and Marvin’s college aged daughter, Margaux, played by a diminuative powerhouse named Alexis Ford. This young, African American performer is passionate, beautiful and a razor sharp talent who, luckily for us, gets all the best lines.

The book and lyrics are by Cindy Burke Feinman and the music is by Cassie Wilson. Both the libretto and the music are fitfully interesting at best.

Unfortunately, Ms. Feinman’s book misses all the real opportunities of the situation she has created. Pity hard working Mr. Christopher, who must struggle to earn respect for a character who is written to be passive, unsupportive, unfaithful, and largely inarticulate, although a college professor. His mistress, Tracy, is also for a very long time entirely unconcerned about her negative effect on Marvin’s commitment to his family, and has no express interest beyond sleeping with him.  At one point she even jokingly refers to herself as “the whore.” This creates a situation in which Margaux understandably and predictably resents Marvin, and dislikes Tracy for coming between her father and her mother. Meanwhile, Margaux clings to her mother, as her mother clings with less and less success to reality, and Marvin is just sort of…there.

Now, I am much closer in age to the character of Marvin than either Mr. Christopher, who is about twenty-five years too young to play the role, or Ms. Feinman, who writes as if she is twenty-five years too young to tell this story…which indeed she is. The story which would have been much more interesting, if Ms. Feinman had realized it, is Marvin’s dilemma, not Billie’s decline. His problem is what carries our interest to the end of the show. That Billie is going to go, and go fast, is a fait accompli, and watching her go is no party. It’s the survivors who will have to face how to move on with life when she’s gone.  That’s a story I would have paid to see. But it just wasn’t on the stage.

I wanted to watch Marvin fight for his daughter to accept the new woman in his life so he can continue to live his life and move on. I wanted to see Tracy deal with changing her role from mistress to stepmother. I wanted to see Billie somehow give her blessing to her husband to let go. Unfortunately, you need a little life experience to see things this way. It’s no surprise that the only really passionate and authentic dialogue in this show comes from the mouth of the college student who appears to be very close in age to Ms. Feinman.

She shouldn’t feel too badly, however, because the libretto of Next to Normalhas exactly the same problem in the end of their show, and they don’t handle it any better. They just tacked an upbeat song onto the end of the show, “Light,” which glossed over the holes in their book, and won them a Pulitzer Prize. Too bad this score isn’t good enough to accomplish the same hat trick.

Ms. Feinman’s lyrics also betray her youth and her lack of sophistication. Marvin’s only really expressive song reaches its lyrical apotheosis on the pedestrian rhymed couplet, “You are so far away, I don’t know what to say.”  Sorry, but Sondheim would have known what to say, and he would have said it much better.   Also, there are many places in the story where a song cries out to be written to replace the dialogue. If Ms. Feinman is going to continue to write her own lyrics, apart from needing to have more to say about life in general, she needs to learn to cannibalize her book more effectively. Ms. Wilson’s music is pleasant, but nothing was that memorable.

I haven’t mentioned a major conceit in the show, in which Billie’s inner thoughts are represented by four Spirits, played by Tabatha Gayle, Jhardon Dishon Milton, Jennifer Reed and Mari Uchida, who move in, around, and with her at various times during the play in actor-like choreography by Nora Thompson. Sometimes they mirror her actions, as in the scenes where they all have morning coffee or water plants in her garden. At other times, however, they just buzz around the stage like choreographed houseflies, and there were several moments when I longed for a big swatter. I’d love to say I thought this was a brilliant addition to the show. It did keep me awake. But it didn’t ever really make me understand Billie better, or care more about anything I saw.  However, they did sing attractive choral harmonies from time to time.

Director Tyler Thomas lets the few sticks of scenery slow her show down in places, which was the last thing it needed. The projections by Jess Medenbach, including a needlessly long sequence involving the Three Stooges, didn’t seem as effective as others I’ve seen at creating the world of the play. The conceit of having the voice of the doctor be represented by the thumping sound of a pounding heart made its point, but didn’t make the scenes work any better. The other major sound cues, particularly the overly loud and abrupt transitions in and out of the scenes in the forest, did not seem well supervised by Sound Designer Emily Gardner Xu Hall.   Thank God the performers were all so good.

So, you can only learn by doing. I won’t say this team is without potential. They should keep writing. But this is a project they should put in a box for ten or fifteen years, and then revisit from a more mature perspective.

You can see If Sand Were Stone at The Acorn Theatre, 410 West 42nd St.

Suzanna BowlingMay 16, 2022
Read More
Scroll for more
Tap
Meet The Playwrights of NY SummerFest: Howard Zuckerman In The Prime of His Life
Desperate Measures, Phantom of the Opera, On A Clear Day, Beautiful: The Carole King Musical and More Rocked Broadway in Bryant Park