It’s hard to be an immigrant kid forced to live in a new country, without your parents, where you don’t speak the language and you have to find  a way to fit in. It also couldn’t be a more timely subject for a musical. So pass out the Cohiba cigars in honor of Pedro Pan, the beguiling new musical now being given an outstanding production at the New York Musical Theater Festival. 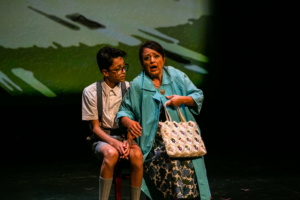 This show began as a commission to playwright and performer Rebecca Aparicio to write a children’s musical. Aparicio herself is the child of Cuban immigrants and was excited to discover the true story of Operation Pedro Pan, which inspired its creation. That program, created by Father Bryan Walsh of the Catholic Welfare Bureau, brought more than 14,000 Hispanic children to the United States between 1960 and 1962 to escape communist indoctrination and oppression. Interestingly, only 50% of the children brought here were ever reunited with their families…a chilling reference to the current immigration quagmire.  The rest were relocated to foster homes and orphanages across the United States. 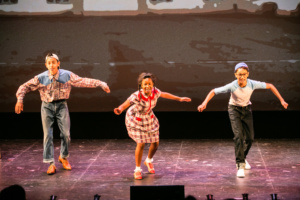 Pedro Panis a shining example of how the NYMF system can help the best material move forward. It was originally developed and presented as a reading at NYMF last year, at which time it won the NYMF 2017 Developmental Reading Series Award. This gave the show a subsidy towards a full production, networking opportunities, and months of dramaturgical support to help get the piece ready for this production. The hard work of the creative team has paid off in a show for all ages that is touching, funny, beautifully written and completely right for the historical moment 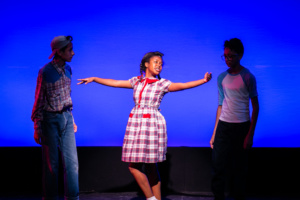 Pedro Pan opens in Havana, Cuba in early 1962. Pedro (Gregory Diaz IV) is an 11 year old boy who loves both his culture and his country. He has a happy life with his two loving parents, played with warmth and sincerity by Wilson Jermaine Heredia and Genny Lis Padilla. The family’s world is upended when his father’s anti-revolutionary leanings put them all at risk from Castro’s oppressive government. So, his parents reluctantly send Pedro off alone to live in NYC with his Aunt Lily (the wonderful Natalie Toro), with the hope they will be reunited soon. We learn that Pedro’s favorite childhood book was Peter Pan, as his parents encourage him to take wing and fly just like Peter did. Somewhat surprisingly, the show itself never directly references the real life Operation Peter Pan.

Once in America, Pedro is comforted by his warm and light hearted aunt Lily, who had to make the cultural adjustment herself only two years earlier, when her inability to speak English forced her to turn from being a school principal with a PhD to a maid cleaning toilets for the wealthy. But even Lily can’t make it easier for Pedro, when he is teased mercilessly and cast out by the kids at school, simply because he is an immigrant who can only speak Spanish.

Luckily for Pedro, he is befriended by Roger (Julian Silva), a Mexican immigrant who has learned both the language and how to hide his cultural roots. Together, they form a Lost Boys Club, after the Peter Pan story, and vow to leave their Spanish heritage behind in order to blend into American culture.

When they take another outcast into their club: a young African American girl recently transplanted from the south, who just happens to be named Wendy (Taylor Caldwell). She complicates their lives because she wants to learn Spanish. She also challenges them to embrace their heritage, along with whatever consequences that brings.

This production deserves high praise for the professionalism of each department. Rebecca Aparicio’s book is brimming with genuine heart, humor and humanity. She also does a superb job of moving between Spanish and English in a way that fits every moment of the story unobtrusively. The music and lyrics by her husband, Stephen Anthony Elkins, are both beautifully crafted. His fine orchestrations, and the top notch band led by Elkins on the keys, with especially beautiful trumpet playing by Andy Warren, entirely capture the feel of the culture and the period.

The world of the play is depicted in painterly, sun dappled scenic images of Cuba and NYC by projection designer Lisa Renkel. The choreography by Sidney Erik Wright  is full of variety, creativity and youthful energy. The sound design by Mark Van Hare was both natural and  beautifully balanced. Casting director Jason Styres  clearly brought wonderful actor choices to the table. Lights by Ben Bauer and costumes by Rachel Dozier-Ezell round out the fine design elements. All this is under the sure handed direction of Melissa Crespo, who keeps the whole show moving fluidly and honestly.

They have limited their ambition to a Theater for Young Audiences show, which pigeonholes the team in a few ways. The biggest issue is length. The show comes to an abrupt end at 75 minutes, because few TYA shows run longer than that. It forces the authors to end the story with a simplistic and unsatisfying resolution. In the end (spoiler alert!) the members of the Lost Boys Club simply agree to be proud of their heritage instead of choosing to hide it and that seems to solve all their problems. That hardly felt like a strong enough choice for Pedro. I also felt, both this year and last year, that Pedro needed to do something which would require  him to earn the right to be respected for being who he is by doing something which requires him to draw upon  his Cuban heritage to succeed.

Also, once you have characters named Pedro and Wendy, you are inviting direct comparisons with the Peter Pan story itself, which could have enriched the show further. In the reading last year, the teacher was clearly a Captain Hook figure and a direct antagonist for Peter. This time around, he’s just comic relief. Now, Pedro has no real antagonist besides his own attitude. Pedro needs a clearer and measurable obstacle to overcome.

In the play,  Pedro’s parents apparently get trapped in Cuba during the missile crisis. We hope to learn that they will get out and be reunited with Pedro. However, at the end of the show, for all we know, he may never see them again. The impact of that on Pedro and what it means for his future are glossed over in the interest of time. If the story is ever expanded, this also deserves more attention.

Finally, the team has  also apparently made the deliberate choice not to let this Pedro Pan grow up. He never makes it out of pre-adolescence. The boys both regard Wendy with suspicion because she might have “cooties”, and young romance never enters the picture. That’s probably a fine choice, if this project remains a Theater for Young Audiences show, but the difference between Peter Pan and Pedro is that a real boy finally gets to grow up.

To the credit of the team, they’ve polished the ideas they had last year as well as anyone could have done. It’s so good, it just makes you long for more of it. I think the overall  quality of the writing is better than Billy Elliott, and the show could have the same, wide, all ages appeal. Like Come from Away, this is a story demanding to be told now. If expanded properly, Pedro Pan has the potential to be a big Broadway hit.