Straight From NYMF: The Gunfighter Met His Match

Straight From NYMF: The Gunfighter Met His Match

In the musical theater, it takes a lot of training, not to mention talent, to be a triple threat performer. That means years of study of singing, dancing and acting. No one would expect to succeed without all that preparation.

But in the world of aspiring musical theater writers, far too often people with a background in only one area, or no training at all, decide that they should be composer, lyricist and book writer of their project. Not that it can’t be done. One of the greatest shows of the classic canon, The Music Man, is the sole effort of bandleader Meredith Wilson. But in the case of The Gunfighter Met His Match at the New York Musical Festival, wanna-be triple threat composer, lyricist and book writer, Abby Payne, has bitten off far more chaw than she can chew.

According to the program notes, Ms. Payne is  a jazz/pop  singer-songwriter, and this show started as a concept album of her songs. I can imagine some of these songs working in that context. A couple of the grooves were indeed catchy.

But she also appears to be a pop songwriter who doesn’t understand the craft of musical theater song writing. Her show is full of love songs with lyrics made of generic banalities about romance loosely strung together, which rarely reflect the specific voices of their characters.  She also uses non-rhymes and near rhymes in a way that may be acceptable in the world of pop writing, but which real musical theater lyricists would never do. Professional country music writers have similarly high standards. You heard proof of that if you saw the superb reading of Storming Heaven earlier in the festival, with real country songs by singer Tracy Lawrence and his collaborators, that had specific diction, truth of character, and perfect rhymes which managed just fine to express exactly what the singers needed to say.

But her songs aren’t the worst of it. It’s her lack of playwriting experience which really shoots this show in the foot. First thing Ms. Payne needs to learn is the old playwriting adage: It’s better to show than to  tell. The story opens with a needless framing device in which the Sheriff of the town tells a young newcomer, Jimmy (the quite delightful Amanda Higgins) , everything about the Gunfighter and the Girl in long winded and clunky exposition,  all of which should have been dramatized instead.

The Sheriff (Craig WInberry) tells Jimmy of a Gunfighter (hunky but one dimensional Michael Hunsaker) who came to town one day. The Sheriff says he wanted the Gunfighter for his deputy.  But the Gunfighter turned him down to join the McNulty gang. If Ms. Payne had better instincts as a playwright, that would have been the first scene of the show. Also, even though it’s the Gunfighter’s story, he gets no opening  number or “I want” song, as one might expect.

The Sheriff then introduces us to the Girl, played by the very charismatic Kristen DiMercurio.  He tells us she has come to town from the east seeking adventure. But not surprisingly, when she sings about what “Could Be”, we don’t get much sense of that from the lyrics. She does, however, very suddenly accept the proposal of a local Rancher, George (Nolan Munda). She seems to be quite happily and genuinely in love with him, as they sing the duet, “Those Eyes.”

But then, a bad guy in black, Dane (played with slimy bravura by Ryan Lanning), comes to town with his gang. He tries to rob the saloon while the Gunfighter just happens to be having a drink. When the Gunfighter saves the Girl from Dane’s advances and thwarts the robbery, all of a sudden the happily married Girl falls inexplicably head over heals for the Gunfighter, who falls for her just as hard at first sight. Incredibly, they “meet cute” without ever asking or saying their names. Of course, that’s because they don’t have any names, besides Gunfighter and Girl. That may be meant to make them seem iconic, but it really just makes them seem even more like the cardboard stereotypes they are.

The Girl then asks the Gunfighter to teach her to shoot to protect herself, which he does. When she points the gun at him accidentally, he sings that he is going “Palms Up” for her, which is probably the best lyric idea in the show. My favorite moment in the show also takes place in this scene, when the two lead dancers, the very capable Chelsea Retzloff and Brandon J. Jones, come on dressed as the Gunfighter and the Girl, and perform an interpretive ballet dance, much like the Dream Laurie and Curly in Oklahoma. But the further development of the central romance between the Gunfighter and the Girl is utterly lacking in credibility, from start to finish, in both story and song.

There are a lot of other inconsistencies and holes in this story. Dane escapes, then comes back to claim the Girl as “his girl,” which is an odd risk to take since they’ve only seen each other once and it wasn’t a pleasant meeting. The Sheriff complains that he can’t handle Dane because he’s too old and creaky. But he has looked and behaved about 24 years old throughout the show. Strangest of all is Shara Radin as the Dance Hall Singer. She is, in fact, a fine opera singer. But what she intones so beautifully is dramatically pointless,  not what you’d expect to hear in a frontier music hall, and goosed with so much reverb you might think she was really a musical ghost.

Jimmy, who has been played for comic relief throughout the show, explains to us that he’s really a girl (quite obvious already) who just likes living life more freely as a man. Then, a saloon dancer, Trudie (Joelle Lurie), proclaims her love for Jimmy and asks “him” to marry her. This could have set up a funny song about gender roles. Instead, they share a mawkish love song with the Sheriff and his girl, which does at least have a clever title about love being a “Shot in the Dark”.

The plot culminates in a shoot out so long it seems meant to be a joke…but sadly isn’t.  I’d need a lot of hard whiskey to have the patience to describe the story any further. 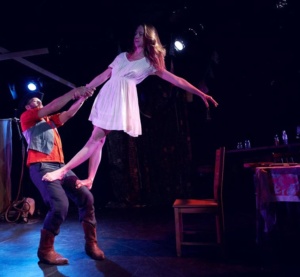 Somebody else wearing too many Stetsons is director, choreographer and set designer, Jeff Davis. His bio clearly shows that he’s a puppeteer and with a dance background. Indeed, his balletic choreography is the best thing about this show. But both his set design, and his handling of the actors on the stage he designed, are simply awful.  The saloon takes up the stage right side of the set, and a white sheet representing nothing in particular is permanently hung across the back of the left side of the stage, which is supposed to represent various other locations.   Whenever the saloon is full, everyone is crowded on top of one another like sardines stage right, wasting half the stage. The other locations could have been as easily represented, and it all would have looked a lot better, if the saloon had been expanded and the sheet eliminated.

The musical direction was also by Ms. Payne, who should have told herself to cut the endless, tuneless, oom-chuck underscoring of the dialogue scenes. The band had an electric guitar, but no acoustic player, which contributed as much to its lack of an authentic sound as Ms. Payne’s mélange of jazz, pop, and ersatz country styles.

Credit the magnetic Ms. DiMercurio, with her velvety warm voice and heartbreakingly beautiful eyes, for filling this empty playwriting with every bit of her being. But even a performer that good can’t save writing like this from an early and well deserved grave in musical theater’s Boot Hill.