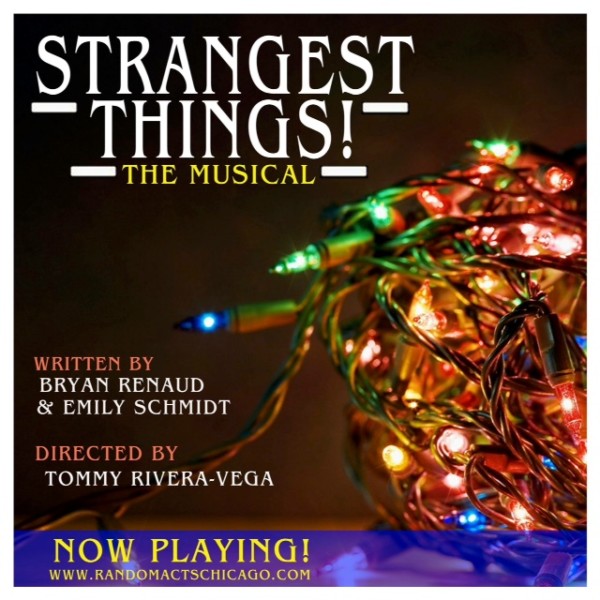 Strangest Things! The Musical – Harmless Fun for Die-Hard Fans Only

Strangest Things! The Musical – Harmless Fun for Die-Hard Fans Only 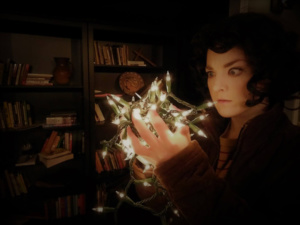 I will begin this review by revealing a secret truth about myself.  I have never watched an episode of the Screen Actors Guild-award winning Netflix sci-fi series, Stranger Things, so when I was invited to review the musical spoof at the Greenhouse Theater, I accepted the invitation with pause. Not knowing the original source material beyond a cover story from Entertainment Weekly magazine, I wondered if I would be as lost watching this as leading lady Winona Ryder looked on that same SAG Award Stage while the Executive Producer of the sci-fi series was giving his acceptance speech? Not letting the fear of the unknown slow me down, I attended the low budget Strangest Things! The Musical  spoof to decide for myself. Directed and choreographed by Tommy Rivera-Vega and written by Bryan Renaud and Emily Schmidt, I was told Strangest Things! The Musical  has become the fastest-selling production in Random Acts’ history. That was clearly a direct result of the cache and name recognition the cult show brought to the table. While the series is a drama, this spoof is played exclusively for laughs. Overall, Things was pretty harmless, I must recommend this only for the most sincere, die-hard fans of the series. There isn’t enough for anyone not intimately familiar with show to really grab hold of to wholeheartedly appreciate or enjoy. Completely lacking in polish and extraordinarily rough around the edges, this sketch-comedy musical is harmless and ultimately forgettable whimsy. 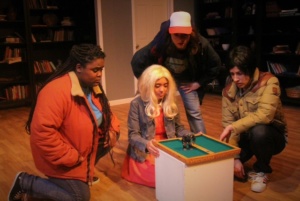 This light-hearted, campy musical mystery featured a trio of young men, Lucas (Mariah Furlow) Steve (Ben F. Locke) and the Eggo waffle loving lisper, Dustin (Colleen DeRossa) searching for a friend who has mysteriously vanished.  Throughout their “Scooby-Doo style” investigation, they encounter a young girl with special powers named Eleven (Alexandra Alontaga), a frantic mother, Juice (Molly LeCaptain) doing a spot on Winona Ryder, I might add,  and a troubled Sheriff Hopper (Kevin O’Connell). Cult favorite, Barb (Christian Siebert) took center stage to cheers, her hapless spectacle wearing, know-it-all charms as off-putting as ever. O’Connell pulled double duty, portraying the evil, booty slapping villain known only as The Doctor as well. Working the entire eight episode series into an 85 minute coherent show ran a little tiresome, but everyone enjoyed the reworked slew of 1980’s pop hits, including Cyndi Lauper’s “Girls Just Want To Have Fun,” Madonna’s “Like a Virgin,” Hearts “Alone,” REO Speedwagon’s “I Can’t Fight This Feeling,” The Eurythmics “Sweet Dreams (Are Made of This)”  Olivia Newton John’s “Hopelessly Devoted To You,” and “Xanadu” complete with a roller-skating, disco-tinged finale. Among the fleeting clever quips, a riff on “Alternative Facts” that played more to the “strangest” reality we are all experiencing now. 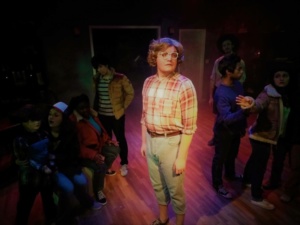 It is clear all involved with Strangest Things! The Musical  were aspiring to craft the next Rocky Horror Picture Show type cult hit. While there is no chance of this becoming that, Strangest Things! did offer some legitimate chuckles dispersed throughout. The shoe-string budget didn’t put a damper on the casts’ enthusiastic characterizations. With that said, there is regrettably little here to offer anyone who is not a card-carrying, binge watching, uberfan of the original source material. From the too heavily applied smoky haze that envelopes everyone as they initially entered the theater, to the repeated strands of holiday lights that kept falling off of their hooks on stage, mid-actor dialog, Things! proved as filling and as nutritious as say a pop tart or one of those neon colored sports drinks, Strangest Things! The Musical ‘s best moments are retreads on established eighties nostalgia. Sadly, this show breaks little to no new ground beyond that.