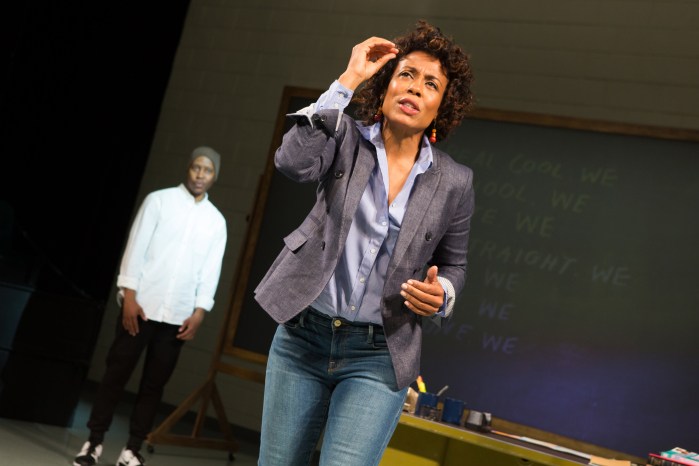 By RossThe black and white video images projected onto the large bare wall resonate with a power that seeps onto the stage and surrounds the actors of Pipeline, the strongly formed play by Dominique Morisseau (ATC’s Skeleton Crew) that was seen a while back at the Lincoln Center Theater. Now, during these difficult times, it can be streamed for your home viewing. It’s an unsettling time for all of us, for different reasons.  As someone just wrote, we are all in the same storm, but not in the same boat. Your boat may be more structurally sound, or more crowded. You might find loneliness or financial ruin in your boat, and it might be sinking.  It’s all perspective.  This play tells another unsettling story all on its own, one that builds and defines itself throughout this complex emotionally heart-wrenching story. The images (projections by Hanna Wasileski) and this play, directed with a strong guiding hand by Lileana Blain-Cruz (LCT’s War) with a simple and a perfectly essential design (sets: Matt Saunders; costumes: Montana Levi Blanco; lighting: Yi Zhao; sound: Justin Ellington) tries to find meaning in its rage. Not necessarily his rage, but ‘the’ rage; the rage of the black American. And the fight to be seen, maybe as something other than that rage. To be seen as a whole person, outside of societal conventions. To be seen as human and real.

Karen Pittman (Broadway’s spectacular Disgraced) as the mother and teacher, Nya, begins with a strong heartfelt plea to her ex-husband and the father of her child, Xavier (Morocco Omari). The words instantly connect us to her frustration and her pain. Fear and confusion dribble out as she attempts engagement with her ex-husband regarding their child. She’s frightened by what has happened. Scared of its meaning and its impact, and her conflicted emotional connection to her past marriage. But then she rethinks, and adjusts herself, trying with some difficulty to return to the powerful teacher and mother she wants to see herself as. It’s a compelling few minutes, in an equally compelling play, one that borders on the cliche but doesn’t fall victim to that trap.A poem of such power by Gwendolyn Brooks is recited and explored within Nya’s classroom. One from an edition by Harper Collins, a commercial white-owned publisher, and another by Broadside Press, an independent Black press in Detroit that embraces the rule-challenging graffiti-style edge that Brooks has intended.  The scene is tight in its deconstruction and explanation. To be seen side by side is where the sharpness lives, and the comparative presentations fly hardest. That ideal, not embodied here, demonstrates a complication where whiteness attempts to absorb and appropriate Blackness. In that contrast, it burns the deepest, where all its lean provocative meaning cannot be denied. “WE REAL COOL” cascades with an incredible power when taught with such insight. It emblazons the dynamic and therefore we cannot take our eyes off Pittman’s Nya as she is swept up in its inner tremor.A question is asked, somewhat abstractly. Rather than wondering why the boys in the poem are not in school, Brooks searches for the conflicted feelings of rage and fear that reside inside them, much like how the young son in Pipeline so desperately wants her mother to investigate and see something else inside his troubling rebellion. The playwright and the poet dare to ask where the seed of anger and spark of uncontrollable violence is sowed in the soul of a Black American man. And as he floats in the background, saying those magnificently powerful poetic words into her unconscious backside, we lean in hoping to see at least a glimpse of an answer to that complicated question.

Karen Pittman (foreground), Namir Smallwood (background). Photo by Jeremy Daniel.The other piece of literature that plays a central role in this engaging drama is one by Black-American author, Richard Wright titled Native Son. It tells the story of a young Black man living in Chicago’s poverty-stricken South Side in the 1930s. The novel suggests there is no escape from the constant state of terror, mainly due to social conditioning, social injustice, and the inevitability of the disenfranchised towards self-destruction. Nya’s son, Omari, intensely and passionately played by Namir Smallwood (Guthrie Theatre’s Buzzer), feels badgered and singled out by his teacher because of this story. To him, it feels like the teacher within the well-appointed private school he is sent only sees him as one thing, not as a whole human who has some hidden anger all his own. Is the displacement of this young man the same social set-up for the inevitable? Would it have been something similar, cut from the same cloth, if he had stayed in his neighborhood, surrounded by like-minded men, and attended the same public school that Nya struggles to teach within? Different, but the same?

It’s a compelling idea, that is most forcibly stated by his girlfriend, Jasmine, a strong but slightly stereotypically ghettoized portrayal by Heather Velazquez (Goodman Theatre’s Another Word for Beauty).  Her interactions with both him and later on with Nya are some of the most pointed observances in the play. She sees something that maybe the others are missing, as she is that Latina teenage girl, sent from her own struggling neighborhood and familial surrounding to attend a well-heeled private school. She sees the way the others see her and her boyfriend, and she has no problem vocalizing her discontent. Maybe that will be a thing that saves her.Heather Velazquez, Namir Smallwood. Photo by Jeremy DanielBeyond the stellar work of the main opponents in this engagement, one of the funniest creations, even when it is coated in rage and frustration, is the work of Tasha Lawrence (MTC’s Good People) as the other teacher, Laurie, at the public school where Nya works. Lawrence shakes the bones of that school staff room with her defiant rage and undying devotion to the task set before her, to try to teach these kids, against all odds, something of relevance and use. She is a firecracker, and she ‘fuckin’ knows it.  So does Dun (Jaime Lincoln Smith) the school’s security guard, who is no match for her fire and her fight.  I only wish Smith’s character was given a bit more to do, as it seems there is a lot more beneath his smile and stance.The two charactered scenes are what makes this piece tick with such wild lyrical poetry and abandonment. They are the dynamics that mostly populate this dissertation on race, rage, and the Black Americans’ existence and tend to be the most powerful. The mother/girlfriend standoff and the father/son battle are layered deep with frustration, desperation, and anger. The mother and son confrontation though is rough and powerful in a different hue, drenched in fear and confusion, but with a coating of desperate need. Tears may come when Nya asks for help, and they may come again when Omari gives her the help she requested. On one level it feels structurally over the top and cynically typical, but Pittman delivers it with such a painful ache that all assumptions are swept aside. Her energy and her embattled love is awe-inspiring. Much like this play. “These good so far?” “Yeah, so far.“

Suzanna BowlingMarch 4, 2021
Read More
Scroll for more
Tap
My View: Until The Curtain Rises Again at The Kravis Center…..
Slings and Arrows – The Best TV Show to Stream on YouTube, Hands Down.