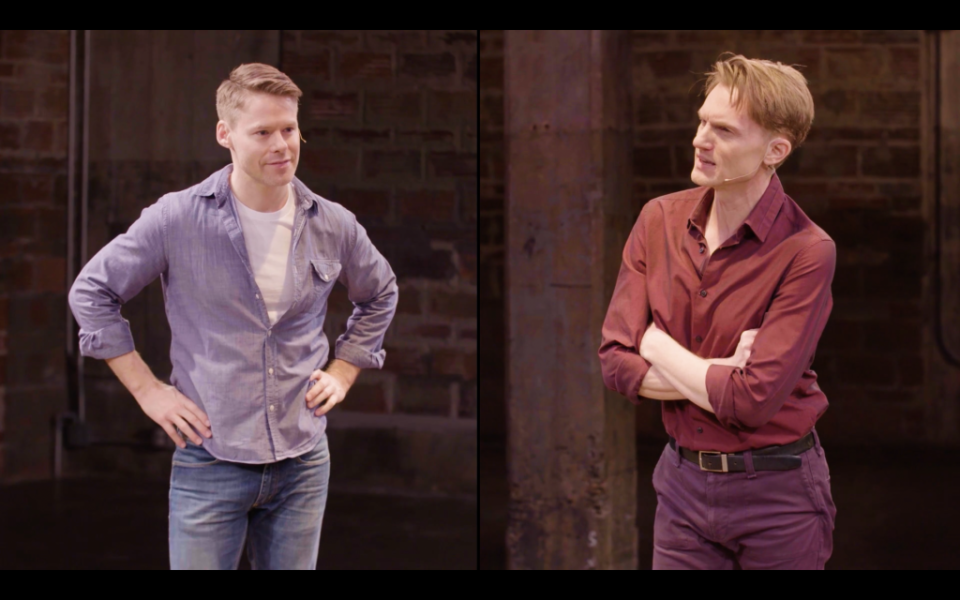 We are told, quite plainly, to ‘buckle our seatbelts‘, giving us a clear impression that we are in for one wild ride just before this digital production of a play called Cock gets started. No wonder. With such a provocative title, this captivating play and production definitely grabs hold tight keeping our attention and our curiosity throughout. Streaming forth by DC’s Studio Theatre until April 18th, the company returns in triumph after a yearlong hiatus from producing theatre. Their first production of their 2020-21 subscription season unzips dramatically and artfully with clear focus, fun, and determination. As the players and fighters step strongly into the ring, Mike Bartlett’s (King Charles III) fascinating play revs its engines, throwing some unseen punches at one another, engaging the twists and turns as its central characters attempt to navigate attraction and frustration, with Cock truly at the circle’s epicenter.

This ultimate Cock fight is a complex trip centered around (and around) sexual desire and attraction. The play never lets up or offers an easy out as it jabs and pivots like a pro. As directed with a fierce fire by David Muse (Studio’s Constellations), the two fundamentally different souls that ignite the sexual battle pace and circle one another like boxers looking for an unguarded opening. Or should I say, like roosters looking for their opponent’s weak spot. “You’re eggs and I’m cheese,” he says, out of the blue, to his enlivened partner. A symbolism that reads right and wrong all at the same time, while not exactly telling the tale that will eventually follow. But now that the truth, the thing he just said, is out there, spoken and real, the idea voiced causes a gaping tear between the two lovers, making it seemingly impossible for the two to find their way back together again. Or is it?

It’s quite the dramatic opening, one filled with a guttural energy as if hit by a car. The distance in between vibrates with tension and meaning, both illustrating the growing conflict between the characters while also giving a well intentioned nod to the problematic limitations of creating socially-distanced theater. The two circle around the rupture, trying to understand the idea of commitment in the presence of so many teddy bears. Then, with a virtual visual crack, felt even through the computer screen, the dynamic engagement shifts, thanks to some stellar work by Wes Calwell, the director of video; lighting designer, Colin K. Bills; and sound designer, James Bigbee Garver; throwing everything that was thought to be true into an alternate realm. It is as if the ground has shifted under their feet, leaving them unmoored and unable to quickly find their newly required balance in this new world order. “Love? Mad? She?” This reformation “needs some straightening out,” we are told, and in that one turning moment, the play on words slams Cock forward with a feisty level of fun and a clever clear intent.

Blending theatrical and cinematic camera angles with precision, the Studio Theatreproduction creates with expertise some pretty solid unforced footwork in their talented cast and staging. The endearingly handsome Randy Harrison (“Queer as Folk“; Public’s The Singing Forest) beautifully portrays John, the central character and player in this ring, who finds himself, without intent, lost in a confusing sensual wilderness that he didn’t see coming. Wrestling with his sexual identity, he stubbles blindly forward, falling into the arms of those who are there waiting to grab hold of him. He discovers an unknown desire waiting by the train, forcing him to reevaluate what it means to love and be love. And by whom. One could label what he is struggling with, in essence, as pansexuality, although it’s never stated as such. John sees himself, at least in this very moment, as not limiting his sexual choice in regard solely to biological sex, gender, or gender identity. He states, it’s not the man, or the woman, but the person he is in love with, or should I say, the person he desires. That rings fairly true with each, but one thing is clear, his sexual desire for his boyfriend, “M”, played intensely by Scott Parkinson (LCT’s The Coast of Utopia), remains intact, although care and comfort is another story. While with his other new love and sexual interest, “W”, dynamically portrayed by Kathryn Tkel (Woolly Mammoth’s An Octoroon), the attachment seems organic and the sex impossible to ignore. This fact is certainly throwing them all for a loop, as it is as much of a surprise for John as it is for “M”, although it is certainly valid and real.

John circles around, jumping in and out of the ring with his different loves. The war of desire is on, and he is paralysed, and sometimes annoyingly silenced, by this surprising twist of attraction and his inability to see his way forward. They both demand a decision, and he gives them what they ask for when they ask him, but as soon as the next match resumes, the game and decision shifts. Is he a perpetual pleaser of whom ever is before him? Most definitely, and as frustrating as it is to all that surround him, the dilemma is real and honestly confusing. The dialogue is sharp and direct, with characters pinpointing the problems with clarity. “You needed to be stronger,” John is told, but he is never quite sure what it is he truly ultimately wants. “Am I going to miss his cock, twitching, throbbing?” John just doesn’t know, stating empathetically that he sees himself as two unique personas, different with each. The shift doesn’t really come off as authentically as it needs to be, but the emotionality lingers with some clarity.

“What is it about him?”, one might ask. John is definitely cute and appealing, that is clear, and as portrayed by Harrison, we can’t stop looking at him, just like “W” and “M”, with utter fascination. The three find a way to engage, and even when the dynamic feels forced, we stay with it, believing that inside the confusion, the complexity of the situation registers as honest and mostly credible. And then, M’s father, “F”, played solidly by Alan Wade (Studio Theatre’s Choir Boy), shows up for the “ultimate bitch fight” dinner, and the gloves come off as the main course is served.

Muse, the Artistic Director of Studio Theatre, remaking his 2014 Helen Hayes Award winning production, finds intimacy and engagement with his minimalistic usage of the stage, the props, and the multiple cameras. The differing visual mediums – theatre and film – pull us in, finding electricity in their construction and focus. The actors utilize the crisp dialogue and close examination with desperate intensity, unpacking their conflict with a fierce fighting edge. More could have been unearthed with a less traditional filming style, but the overall effect does keep the warring action on fire. It’s a pleasure to finally see this play being performed, even pseudo-live, a play that I have been desirous to see ever since it made its way, most daringly, onto the stage. This production, streamed for us all to see until April 18th is a worthy contestant, packing a strong punch with every twist and turn around the ring. Who will win the war, that remains to be seen.

Suzanna BowlingOctober 24, 2021
Read More
Scroll for more
Tap
What to Watch in The New Year: April 1
Penny Fuller and Bob Dishy To Star In Arthur Miller’s I Can’t Remember Anything