Streep, LuPone, Peters, McDonald, and Many More Set Off “Take Me To The World: A Sondheim 90th Birthday Celebration” 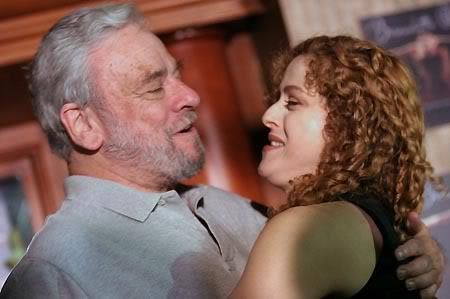 Streep, LuPone, Peters, McDonald, and Many More Set Off “Take Me To The World: A Sondheim 90th Birthday Celebration”

An all-star company will perform in a special virtual concert in celebration of Stephen Sondheim’s 90th Birthday, “Take Me To The World: A Sondheim 90th Birthday Celebration”, this Sunday, April 26 at 8:00 PM ET on the theater world’s premier online content provider, Broadway.com and the Broadway.com YouTube channel. The free online event, hosted by Raúl Esparza, is set to take place on the exact 50th anniversary of the opening night of Sondheim’s groundbreaking musical Company (the original production debuted on Broadway on April 26, 1970).

The evening’s host and producer Raúl Esparza starred as Bobby in the highly acclaimed, Tony Award-winning revival of Company in 2006, and in the Kennedy Center Sondheim Celebration productions of Sunday in the Park (George) and Merrily We Roll Along (Charlie) in 2002, as well as the City Center Encores! production ofAnyone Can Whistle (Hapgood) and, most recently, in last year’s Road Show (Wilson).

“The world is in a hard place, and we are all searching for something great. Well, Stephen Sondheim is greatness personified. So, we’ve assembled a group of people who love Steve and have worked with Steve and have been inspired by Steve to sing his music and share some joy and some heartache together,” said Esparza. “We may be far from Broadway right now, but Broadway is never far from us. Besides, Stephen Sondheim turned 90. How many times do you get to be 90? 11?  So come on, say it, get it over with, come on, quick…happy birthday.”

This special online event will act as a fundraiser for ASTEP (Artists Striving to End Poverty), the organization conceived by Broadway Musical Director Mary-Mitchell Campbell and Juilliard students to transform the lives of youth using the most powerful tool they had: their art. Today, ASTEP connects performing and visual artists with youth from underserved communities in the U.S. and around the world to awaken their imaginations, foster critical thinking, and help them break the cycle of poverty.

“Sondheim shows us the depth of our hearts, the complexity of our minds, and all that it is possible to accomplish through his brilliant marriage of music and storytelling,” Mary-Mitchell Campbell added. “Artists Striving to End Poverty aims to make sure that all children living in challenging situations have the opportunity to be transformed by the making of art. In my personal experience, encountering Stephen Sondheim’s music has helped these children imagine an entirely different life and future for themselves. Linking Sondheim and ASTEP together during this very difficult time made perfect sense to us. Children and art.”