Strictly Ballroom: Still In Need of Some Sparkle and Heart

Strictly Ballroom: Still In Need of Some Sparkle and Heart

Ross
Watching Baz Luhrmann’s stage adaptation of his hilarious and romantic charmer of a film that both makes fun of and lovingly embraces the competitive ballroom dancing world in small town Australia, is an exercise in acceptance. One must accept that taking the iconic and satirical film, Strictly Ballroom and trying to create a solid engaging musical has some innate difficulties and traps attached to it. One that sadly, Lahrumann and Craig Pearce, and the subsequent new revision of the book by Terry Johnson fail to bypass as the story moves along at a clip that assumes we all know what happens emotionally already. Because, well, we all know the movie, and we all know that the awkward girl, once she takes off her glasses, will be the beautiful girl that the guy will undoubtably fall in love with.  I mean, it is a classic set-up that Lahrmann most successfully put to great use in his 1992 movie. And most of us still want to believe in that fairy tale, and gobble it up especially in the way the movie presented it back then. It was funny, crazy, and a whole lot of charming. Where as, Strictly Ballroom, The Musical, making it’s North American premier in Toronto at the Princess of Wales Theatre, love happens because, well, ’cause it’s supposed to.  The film says so. And this is where the trouble starts. 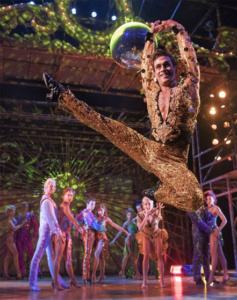 Whenever we read a Cliffs Notes version of, let’s say, a Shakespearian play, we read about what happens, but generally miss out on the magic and the poetry. We only find out the details but not the heart. Watching Strictly Ballroom, The Musical feels like the Cliffs Note version of this musical movie transfer. My companion, who had never seen the movie, asked when it was all over, why did the two leads fall in love? “I know they did, because they said they did, but I didn’t see when or why it happened”. And I could give him no real reason that I could point to within the musical, except that they did, because they tell you they did. After it happens. And that it made sense in the movie.  I accepted it because I knew the film, but the musical failed to show us the real transition and romantic arc. 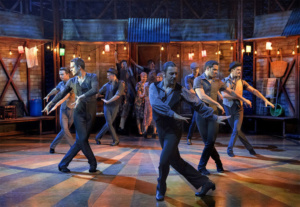 Now don’t get me wrong, this is not a terrible musical by any means.  There is a lot of great stuff floating around in its assembly.  The leads are magnificent. Sam Lips (Broadway’s Pippin, Cinderella), as the maverick ballroom dancer, Scott Hastings, who wants to risk it all so he can dance his new steps is as exciting to watch as you’d expect. His champion caliber dancing is skilled, athletic, and powerful. The only time it feels odd and underwhelming is the number ‘On The Edge‘ when he appears to dance with five multiple mirror images of himself. It’s very homoerotic, which I doubt is the desired effect, and not very soaring. Also, it is within his character development that we don’t really see the romantic attachment grow.  We don’t really have a glimpse into the reasons he even takes on his new dance partner when the wonderfully horrible Liz Holt (a solid Lauren Stroud) leaves him for the reigning dance champion. Nor do we see him grow to love her. Not really.  Well, until he says he has. 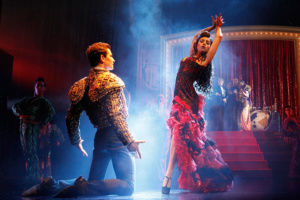 Gemma Sutton, as Fran, the new dance partner of Scott’s, is as surprising as she is meant to be.  As it is in so many teen movies, when the girl finds herself together with the handsome man (usually the high school jock, but this time the star dancer), all it takes to change homely into beautiful is the removal of a pair of glasses and the hair needs to be set free, then, voila, gorgeous.  Add a clothing makeover and a voice that soars stronger and more magnificent with each and every song, and a miracle appears.  Her rendition of Cyndi Lauper and Rob Hyman’s  ‘Time After Time‘ is one of the highlights of the show, along with the Act II duet standout, ‘Love Is In The Air‘ (written by Harry Vanda & George Young).  It’s a bit troubling that the two best numbers are old favorites being fitted into the show (as they were in the movie). But Sutton does a great job being ‘just Fran’ at the beginning, the clumsy beginning dancer and floor mopper who transforms herself into the exciting and skilled Spanish dance partner to Scott by the finale.  It’s Dirty Dancing mixed with She’s All That staged within the sequined world of Australia’s Pan Pacific Ballroom Dance Competition.
The true heart of the show though resides outside of the sequined world of the competitive Ballroom Confederation, run with an over-the-top cartoonish glee by Barry Fife (Julius D’Silva). On the flip side of Shirley Hastings’ dance studio (quite literally), is the home of Fran, her Abuela (a gorgeous Eve Polycarpou), and her father, Rico (played with strength and fire by Fernando Mira), the two hold-outs from this show’s Sydney run and the two best secondary characters in the musical. The number where Rico tries to find the beating heart within the cold and mechanical Scott, ‘Magnifco‘ is just that, magnificent.  It sends you out of the theatre at intermission with high hopes for what is coming in Act II.
Sadly, the second act doesn’t build strongly enough on that Act I finale.  It throws away the Rico/Fran relationship that could have used a song and a moment. It squanders our hopes of emotionality and retreats into the messy world of dance politics and the impressive but creaky revolving set designed by Soutra Gilmour (lighting by Tim Lutkin; sound by Garth Owen).  I did like the ever present spectators hanging around and over top of the action.  They were like hungry ghosts in gorgeous gowns (costumes by Catherine Martin), but found that they kept flooding the stage too often messing up the focal point with their feathers and sparkles.  I felt bad for the two young stars, Megan Dunn as Kylie and Aiden Bushey as Luke, who were having a great time in the spotlight during their number, ‘Let’s Dance!‘ only to have all the other adult dancers shuffle on and crowd these two out (choreography by the director, Drew McOnie).  It messed up a perfectly lovely moment that was dripping with fun and charm.
In general, the competitive dancing segments are meticulous. The back story of the family Hastings is ridiculous fun mixed with desperation, but doesn’t play as well as the film version did. It feels too neat, tidy, forced, and convenient. But Tamsin Carroll as Shirley Hastings, Scott’s pushing stage mother is the perfect blend of anxiety, ridicule, and aggressiveness. She looks the part and gives it her all.  Just as Charlotte Gooch as the dance champion/goddess Tina Sparkle is a long legged stick of dance dynamite. With so much talent going for it,  I’m surprised by the lack of connection that the musical adaptation inspires. I’m assuming this show is going to grow and continue to be worked on.  Baz Luhrmann, the creator of the movie and the musical handed over the direction to McOnie (Olivier Award Nomination for Choreography for Regents Park’s Jesus Christ Superstar) after a less than spectacular reception to his original production in 2014. From the sounds of it, he has improved the show dramatically since Sydney, when it transferred to the U.K. But it still has a way to go to iron out the wrinkles and sew in some heart.  It’s only a few steps away from creating something satirically wonderful and fun, if they can pause a bit and look at it with virgin eyes.  Strictly Ballroom The Musical needs some more of that 1992 satirical magic, shimmer, and sparkle, with some more mischievous winks and a dash more heart. A show living in fear of these qualities, is a show half lived, so they say. Here’s hope that the next stop on the road to Broadway finds some fearlessness in the floor boards. I see a champion waiting to find their new steps.
So for more, go to frontmezzjunkies.com
Related ItemsBaz Luhrmanndrew mconiemirvishNewRossstrictly ballroom musicaltoronto theater
Dance