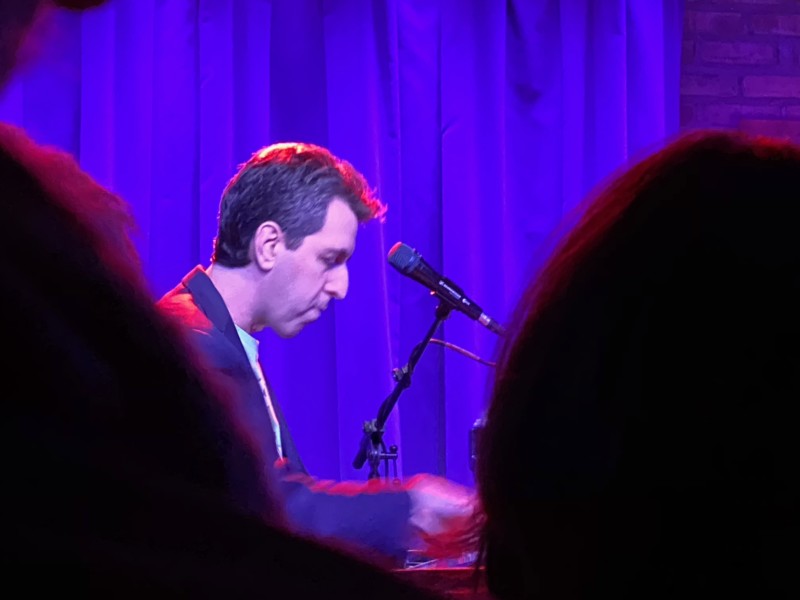 Jason Robert Brown’s residency at SubCulture kicked off December 2014, with a concert of songs from his shows The Bridges of Madison County with Kelli O’Hara and Steven Pasquale, Urban Cowboy featuring Jenn Colella, and Parade’s Carolee Carmello.

Celebrating his 5th anniversary Jason with his amazing band; Gary Sieger (guitar and ukulele), Jamie Donald Eblen (percussion), Randy Landau (upright/electric bass), Lisette Santiago (percussion) and the amazing fiddle virtuoso Todd Reynolds and backed by the Voices of Fierceness, they blew off the roof, starting with the emotional touching “Music of Heaven”.

Right from the start, I was blown away not only by JRB’s connection to melody, but his searing lyrics that cut to the bone. I am enclosing another version, so you can hear this remarkable song from Jason’s album, Wearing Someone Else’s Clothes.

The rousing “Step it Up”, which kept modulating to the rafters in clever intervals followed and made the evening a joyous celebration.

Joining JRB was Marty Thomas who started off on Adele’s “Send My Love To Your New Lover.” Thomas made his Broadway debut at age 11 in the original production of The Secret Garden. This is Grammy nominated recording artist, has been seen on Broadway in Wicked and Xanadu. He is also a vocal arranger, producer and backup vocalist. He treated the audience with his version of “I Can Do Better Than That’ from The Last Five Years.

The surprise of the evening was Shoshana Bean, who delivered a deeply moving “All Things In Time” from JRB’s album How We React and How We Recover. This was indeed magical.

Marty was back with “Someone To Fall Back On” from Wearing Someone Else’s Clothes.

What came next, was one of the most thrilling new musical theatre songs, I have heard in a long time. “The Western Wall” is from JRB’s new musical The Connector. Todd Reynolds violin solo was a gift to behold and the beat is infectious. I long to hear more of this innovative, yet musically grounded score.

In a strange turn of events “Christmas Lullaby” was sung by Jelani and one of my favorite JRB songs “Flying Home,” was sung by Marty. Both are from Songs For a New World.

Right before the end of the evening a cake and the duet “What Christmas Means To Me”.

Both of course needing to end with one of Jason’s song the rousing “Melinda” from How We React and How We Recover, left the show on a musical high note. This was one of the best nights, I have had with music all year.

Spoiler alert: this ties for the #1 slot of my Best of the Best list for cabaret.