Suffs Woman at War With Each Other

Suffs Woman at War With Each Other

Women are our own worst enemies and the new musical by Shaina Taub Suffs, now playing at The Public Theatre tells that story in spades. The women’s movement has and still is at war within itself. “There never was a young woman yet who did not think that if she had had the management of the work from the beginning, the cause would have been carried long ago,” states Susan B. Anthony.

When Suffs starts the movement has been going on for sixty years. Ms. Anthony has been dead for seven years and in charge is Carrie Chapman Catt (a terrific and staunch Jenn Colella). Enter brash young newcomer Alice Paul (Taub), who bully’s her way into meeting Catt. She wants to know why only 11 states are committed to voting rights for women. It seems so pathetic, considering it took 60 years for the National American Woman Suffrage Association to accomplish that. Alice wants to do a protest march on Washington, Catt wants to go for New York’s vote making it 12 states. The two needless to say clash. 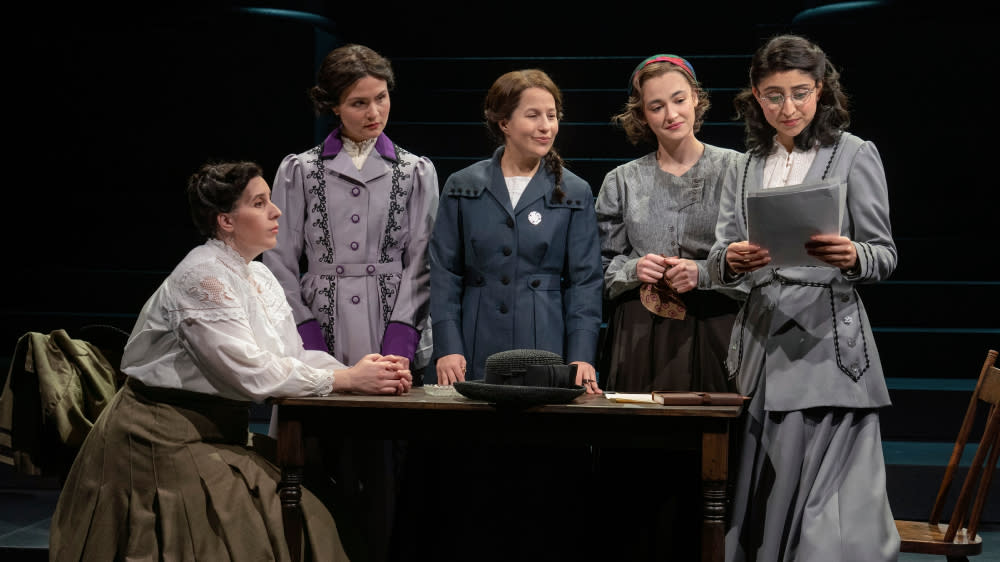 Alice recruits Lucy (Ally Bonino) her friend from college, Inez Milholland (the demure and commanding Phillipa Soo), “the it girl of her time,” who then recruits Ruza Wenclawska (another standout performance by Hannah Cruz), a militant labor organizer and Doris Stevens (at my performance played by Mia Pak), who chronicles the movement. 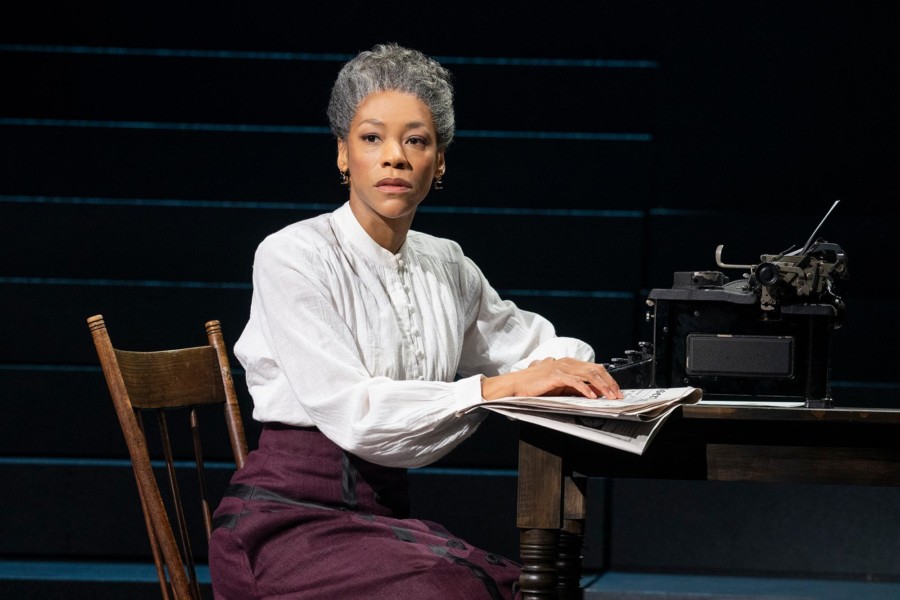 Alice also invites Ida B. Wells (a fabulous Nikki M. James) and other Black suffragists such as Mary Church Terrell (Cassondra James), the first president of the NAACP, to a march on Washington, however the Southern women and backers do not want them there and they are told to march in the back. Wells refuses singing the powerful ballad “Wait My Turn”. 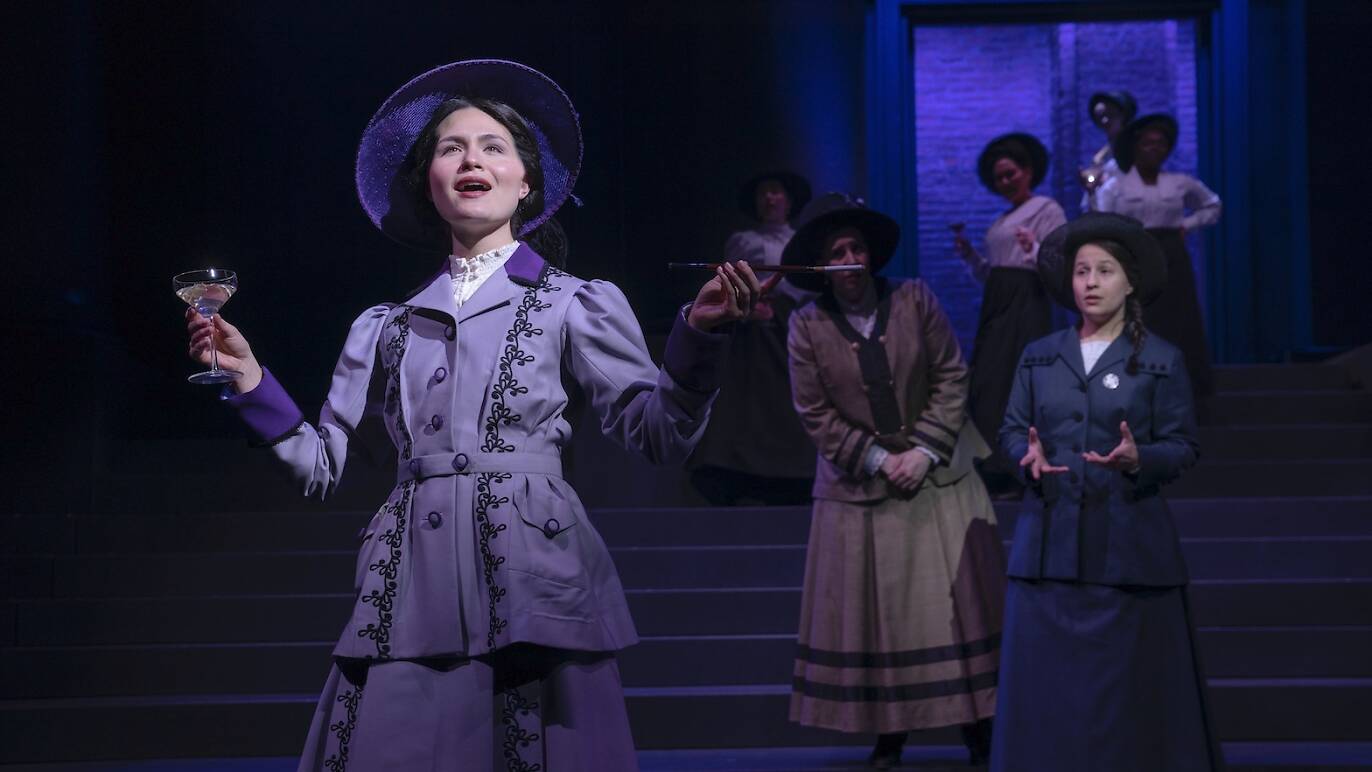 The President at the time is Woodrow Wilson (the phenomenal Grace McLean), who “loves the ladies, with all his heart, until they start to speak,” He plays games with Alice and her cohorts, as well as with Ms. Catt. However Ms. Catt concedes to help the President, where Ms. Paul does not. Becoming more and more desperate the new Suffs who have been ousted by the NAWA start their own organization The National Women’s Party. They take their grievances public, get arrested, stage hunger strikes and finally win the vote, however they do not win the 19th Amendment, which has not passed today.

The cast is entirely made of women, non-binary performers and musicians who are extremely talented. Ms. Taub does extremely well, but I would like to see someone else play the role, so she can fine tune this musical. I loved and hated Grace McLean’s outstanding portrayals. Nikki M. James almost steals the show, but it is Jenn Colella who journey’s the furthest and really makes us understand the power play between women.

Leigh Silverman’s staging, does not help this over stuffed show move at a faster pace. Att 2 hours and 45 minutes, Act 2 feels forced. Mimi Lien’s one pony set is rather cold, but Natasha Katz lighting warms it up. Raja Feather Kelly’s choreography is subtle, yet effective.

There are 38 songs by Ms Taub and the show is sung through like a pop opera. Ms. Taub’s lyrics are smart, almost Hamilton esq. Especially clever are the lyrics to “If We Were Married.” “Marriage is essentially a death trap for women. The dutiful wife would be turning over to her husband all her personal possessions, her private property, her legal authority and whatever shreds of autonomy she had left.” Musically however, some of the songs bring to mind Beyonce’s “I’m A Survivor” and in “Ladies” “The Ballad of Guiteau” from Assassins. The stand outs are “Finish the Fight,” “This Girl,” “Wait My Turn,”and  “Find a Way.” Musical director Andrea Grody and her orchestra should be commended. The underscoring is fabulous.

Ms Taub also penned the book and that could use another eye, though she gets a lot across. Because she has crammed so much information, I think she is missing her biggest points.

In the end the cycle between the established suffragettes and the newer, younger models will always be at odds.

The two most enlightening parts of the whole show will most likely go over most people’s heads. It was Mrs Woodrow Wilson who refused to sign. After her husband has a stroke she states; “Now the presidential vote belongs to me. Support for Suffrage? Absolutely NO!” It was a women who turned it down and the same is true of the 19th Amendment with some of the states!

The 2nd part is in 1972, when the new recruit doesn’t understand the importance of passing the ERA. It still will not be passed even 40 years later and most women do not even know that!

Suzanna BowlingJuly 28, 2022
Read More
Scroll for more
Tap
Songs About Trains: A Celebration of Labor Through Folk Music That Needs More Structure
You’ll Be Swell! You’ll Be Great! The Fine Art of Performance