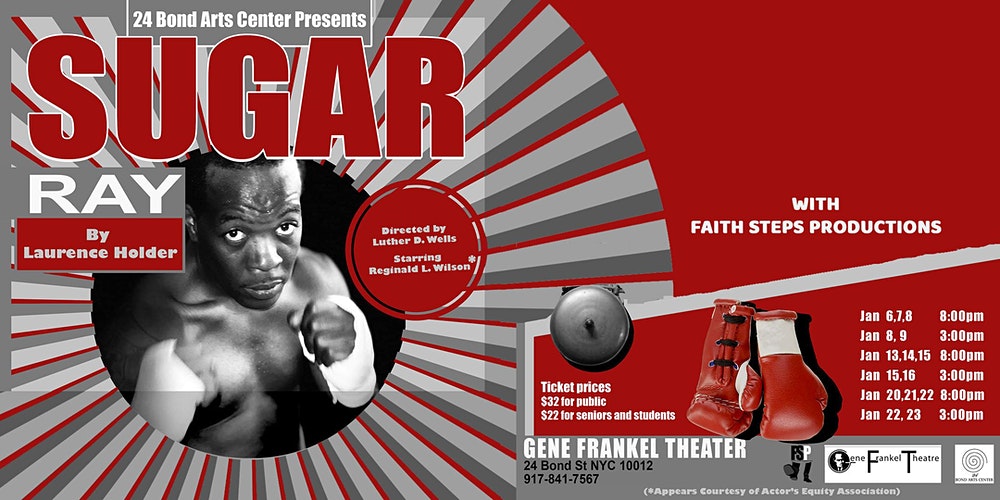 Born Walker Smith Jr., he would go on to be known as Sugar Ray Robinson; one of the greatest fighters of all time. At the Gene Frankel Theater we just witnessed Robinson’s first fight in which he loss to Jake LaMotta. Unlike today, boxers of yesteryear considered themselves warriors, gladiators, men of men and a lose meant respect for the winner and conversely the winner didn’t show up his opponent. In Lawrence Holder’s Sugar Ray we see a softer side, a human side to this man up on the stage alone for ninety minutes. In real life, however, Robinson ran with gangs, contrary to Holder’s writing. Robinson had many wives, ran into trouble more often than what was portrayed here on stage.

Directed by Luther D. Wells and staring Reginald L. Wilson, the show is an interesting one. Holder puts together a pithy play and both Wells and Wilson deliver on its strong undertones. The stage is a half boxing ring, sans a stage, the seating is all around the ring. Wells did this to invite the audience to see up close Mr. Robinson’s world. Wilson himself plays the intimate setting up, as he too fences with the audience. He talk to us as he was telling his life story, as if it was just two people exchanging war stories. Luther D. Wells is “invite us” into his living room with Sugar Ray as the main attraction.

Boxing years ago, was different than it is today: boxers often fought once a week and at a minimum once a month. They faced many of the same tough fighters over and over again. In Robinson’s case, he met Jake LaMotta, Rocky Graziano, Carmen Basilio to name a few on a regular basis. Even a great boxer like Sugar Ray Robinson still had 19 loses in his twenty-five-year career. To hear Wilson tell it was both heartfelt and heartwarming. In the words of Holder, Robinson liked and respected people in general, and people genuinely liked Sugar Ray. Respectful of his mom and sisters, Holder would have you believe that he went through life as a pious, anointed person, but in reality, that was not the case. Tax issues and womanizing really hurt his career, he came back out of retirement because he needed the money causing him to lose his very first fight back. His three marriages hurt him emotionally and financially.

The Frankel is a very intimate venue that is the was a great place to be on a Sunday afternoon. It felt as if I turned on the T.V. in my home, watching this unfold before me. By the end of the play I felt like “Sugar Ray” was my long-lost friend. He told me stories that one only tells your boxing buddies like Cassius Clay and Joe Lewis.

Luther D. Wells’s direction was on the mark, giving us an emotional afternoon. Both the actor and director gave us a balance version of Robinson’s life.

Solo shows are difficult in practice. In Sugar Ray he writes an old-time story with old time men. The stories show not only the pain in boxing, but the segregated nation that had signs on the windows of establishments stating “no blacks, Jews or dogs”. We are told that a Jewish fight promoter takes him inside one of these establishments and the people are accepting of both of them. How a gangster by the name of Carabeo asks him to take a dive for one million dollars. When Robinson refuses, Carabeo respects his decision. When LaMotta takes a dive to get a shot at the title, Robinson respects his decision. Non-judgmental men among men.

This play could have been written in the 50’s, 60’s, 70’s or now as it is timeless. Men like these gladiators usually are.