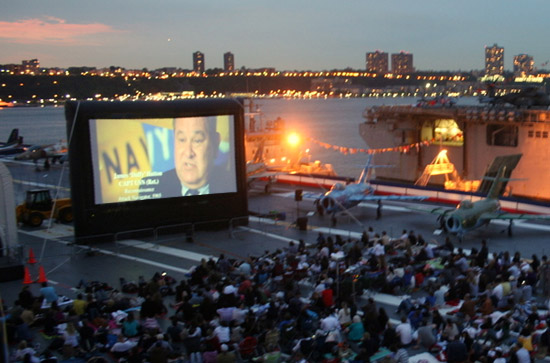 Just in time for Father’s Day, The Intrepid Summer Movies Series their FREE summer movies series, presented by Bank of America, takes place under the stars on Intrepid’s Flight Deck.  Doors open at 7:30pm, and the films starts at sunset, weather permitting.

6/ 17: Movies Under the Stars: Trolls World Tour at Thomas Jefferson Park, Manhattan  8:30 p.m.–11:00 p.m.
When the Queen of the Hard Rock Trolls tries to take over all the Troll kingdoms, Queen Poppy and her friends try different ways to save all the Trolls. Free!

6/18: Movies Under the Stars: A Dog’s Purpose at Twenty Four Sycamores Park (in Twenty-Four Sycamores Park), Manhattan 8:30 p.m.–11:45 p.m. This heartwarming comedy-drama follows a dog as he is reincarnated as different breeds belonging to various owners.

6/19: Screening: SUMMER OF SOUL (…OR, WHEN THE REVOLUTION COULD NOT BE TELEVISED) at Marcus Garvey Park, Manhattan 3:00 p.m.–8:30 p.m. Presented by Target and In Association with NYC Parks’ Historic Harlem Parks and Jazzmobile For our 2021 season due to modifications to follow state and local guidelines.

6/19: Movies Under the Stars: Frozen II at Jacob Schiff Playground (in Jacob H. Schiff Playground), Manhattan 8:30 p.m.–11:30 p.m. Elsa the Snow Queen and her sister Anna embark on an adventure far away from the kingdom of Arendelle. They are joined by friends, Kristoff, Olaf, and Sven.