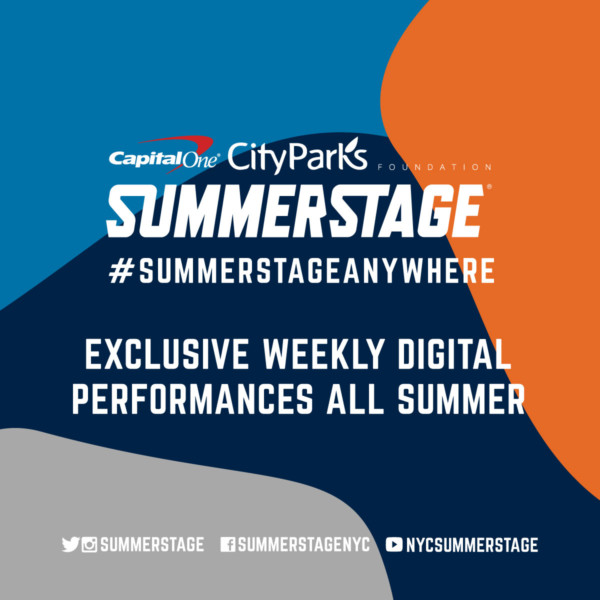 The organization originally founded by Howard Zinn and Anthony Arnove, who together edited the book Voices of a People’s History of the United States, brings to life the extraordinary history of ordinary people who built the movements that made the United States what it is today, ending slavery, protesting war and injustice, creating unions, advancing women’s rights and LGBTQ liberation, and struggling to right wrongs of the day. By giving public expression to rebels, dissenters, and visionaries from our past-and present-SummerStage Anywhere and VOICES seek to educate and inspire a new generation working for social justice, and this is especially important right now. The performance will feature contemporary artists and authors who will use events, music and words from our nation’s history as inspiration for new discussions.

The entire VOICES performance will premiere exclusively on Friday, June 12th at 7:00PM EST on the SummerStage YouTube channel.”For over 30 years, SummerStage has provided a platform to bring communities together. We believe deeply that we cannot change the future if we do not have an understanding of our past,” said Erika Elliott, Executive Artistic Director of SummerStage. “The historical texts within Howards Zinn’s A People’s History of the United States give voice to timely and poignant information that is as important to today’s dialog as it was when the words were first spoken. SummerStage stands in solidarity with our fellow New Yorkers who are pushing for necessary change. We hope this performance will provide some inspiration to help initiate that change and help us rebuild a stronger city and country.”

On Friday, June 19 at 7:00PM EST, SummerStage Anywhere will honor the 155th anniversary of Juneteenth, the nationally celebrated commemoration of the end of slavery in the United States, with a digital day of dance. Tribute performances will be presented on SummerStage’s Instagram channel culminating in a performance on SummerStage’s YouTube channel, featuring a panel discussion led by Executive Artistic Director of The Billie Holiday Theatre, Dr. Indira Etwaroo, followed by a tribute performance of “HANGING TREE”, featuringJamel Gaines Creative Outlet Dance Theatre, vocalist Marcelle Lashley, and poet Carl Hancock Rux in addition to an excerpt from RudduR Dance’s ballet, “WITNESS”.

On Thursday, June 24 at 7:00PM EST, native New Yorker and pop phenom MAX will deliver a special performance to the SummerStage audience. Called a “Young Pop God” by GQ, MAX was named a “top popstar to watch” by Billboard and was nominated for “Best New Pop Artist” at the 2019 iHeartRadio Music Awards. The Billboard top-pop star’s double platinum hit single “Lights Down Low” earned half a billion streams globally. The performance will premiere on the SummerStage YouTube channel.Closing out the June programming is Grammy Award-winning Beninese singer-songwriter, actress and activist Angélique Kidjo. SummerStage alumna Kidjo will bring her Afropop world fusion sound to an exclusive performance on SummerStage YouTube channel.

On Saturday, June 26 at 7:00PM EST.Following June, SummerStage Anywhere will be home to a one-of-a-kind digital content series highlighting genres that were born in or deeply represent New York — hip hop, salsa, jazz, global, indie, contemporary dance. The summer series will include weekly content segments including interviews with and performances by iconic artists, neighborhood tours with artists, and arts engagement for youth.  For a full schedule of upcoming programming, please visit summerstageanywhere.org.

For ongoing updates on SummerStage Anywhere as well as SummerStage programs, please continue to visit summerstageanywhere.orgAs an independent, non-profit organization, we rely on our donors to help us make SummerStage possible. Support from donors will help secure the future of SummerStage as New York’s largest free outdoor performing arts festival. We believe the arts are for everyone and encourage those who can donate to visit cityparksfoundation.org/give for more information.

Capital One is the Title Sponsor of the 2020 SummerStage festival. Disney is a sponsor of SummerStage family programming.Generous private support is provided by The Thompson Family Foundation, Howard Gilman Foundation, Mertz Gilmore Foundation, The Shubert Organization, and the New York Community Trust NYC COVID-19 Response and Impact Fund. SummerStage is also supported, in part, by public funds from the NYC Department of Cultural Affairs, the NYS Council on the Arts with the support of Governor Andrew M. Cuomo and the NYS Legislature, and the National Endowment for the Arts. Additional support is generously provided by our dedicated SummerStage Members.Media partners include iHeart Radio featuring Lite FM, Power 105.1, 103.5 KTU, Q104.3, and Z100, WFUV, Relix and DoNYC.In all of its programming and activities, City Parks Foundation partners with the New York City Department of Parks & Recreation to improve neighborhood parks and the communities they serve.

RossDecember 4, 2022
Read More
Scroll for more
Tap
Get Up Close With The Shed
Project Grand Slam Brings Back The Spaghetti Western With “The Pardners”