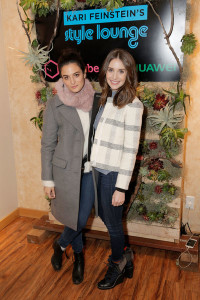 Soon-to-be dad Nate Parker showed up just after noon with his wife to enjoy the event and discuss the premiere of his very buzzed about movie, The Birth of a Nation.

Adam Scott and his wife recently adopted an adorable dog  and they picked up a Petcube so they could keep tabs on it while they are gone.  Petcube is a wireless interactive pet camera that allows you to check in on your pet from anywhere- $200. Sophia Bush flew in from Chicago, where she’s currently living with roommates and three dogs while she films Chicago PD.  One of her dogs is older and deaf, so she was excited to take home the Petcube pet camera to keep an eye on him while she’s not home.

Vanderpump Rules cast rolled through in groups. Stassi, Kristen, Katie, Schwartz came together.  Tom was trying on coats from CMFR while closing his eyes smiling- he said Jax is weird when he poses for photos.  Arianna, Jax, and Tom Sandoval came later in the day because they had been skiing.

Also, the cast of Joshy reunited, including Jenny Slate and Alison Brie who posed together, and Nick Kroll who came and picked up a smart watch from Huwawei.

Kari Feinstein’s Style Lounge in honor of the 2016 Sundance Film Festival presents the latest and greatest in clothing, jewelry, electronics, and gadgets. It has for years been considered one of the highlights of Main Street.