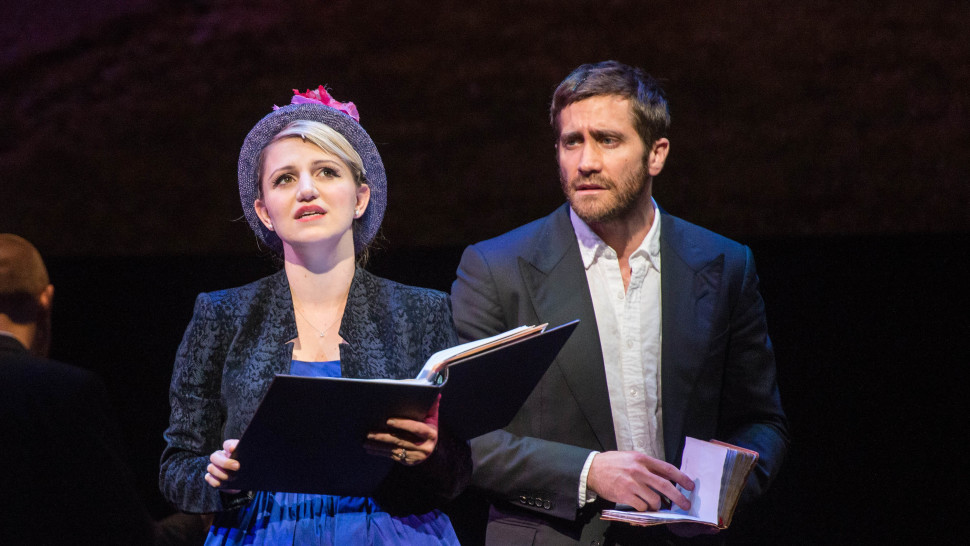 Sunday in the Park with George at the NY CityCenter Gala

Sunday in the Park with George at the NY CityCenter Gala 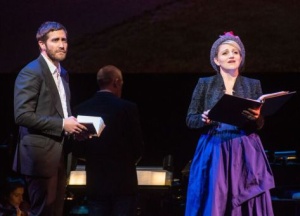 So I’m going to begin by asking for your indulgence. Sunday in the Park with George besides being a masterpiece by Stephen Sondheim (Music and Lyrics) and James Lapine (Book), is just simply one of my all time favorite shows with numerous very special memories attached. This is the third production I have seen, and one of those, the 2008 Roundabout revival/West End transfer starring Daniel Evans and Jenna Russell, I saw numerous times. Three to be exact. The show literally makes me weep, every time, and in both acts. I’m not quite sure why it triggers such a response in my emotional core, but it appears that I only need to hear the initial chords of a few particular songs for the tears to begin. Many car drives by myself listening to the cd will attest to that. One of my strongest memories was a night in 2006, when I saw Russell playing the role of Dot, the mistress, in the West End production. I had just arrived that day into London, and maybe it was the jet-lag but, but the tears started flowing in Act 1, and only intensified in Act 2. So much so, that the sweet Bostonian lady sitting beside me started to maternally stroke my arm in an attempt to settle me down a bit. Bless her. 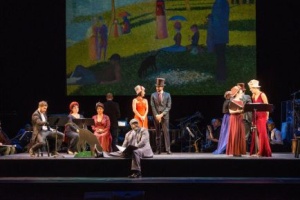 It will always be very difficult to top that spectacular production (which in my opinion was much better than the Peters/Patinkin Broadway original that I saw in 1985), but the production for the New York City Center Annual Gala, lovingly directed by Sarna Lapine, didn’t disappoint. Walking in, I was excited, but also extremely nervous. How would the two leads, Jake Gyllenhaal and Annaleigh Ashford, measure up? I was clueless whether Gyllenhaal could live up to the memory of Mandy Patinkin, my all time favorite George (sorry Evans, it’s just the truth). With that hanging over my head, I prayed he wouldn’t be a disaster. I had also forgotten that Ashford was my favorite thing in Kinky Boots a few years ago, but playing the role of Dot felt like a huge jump. But I was willing to take that leap with these two brave souls, and cross my fingers. 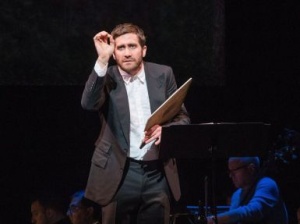 Thankfully, Gyllenhaal was spectacular in the role. Devastatingly good right from the beginning. Such an impressive performance especially knowing how little rehearsal time they all had, and who knew his voice had that power and range? At times, he almost sounded like Patinkin, which is a huge compliment for me to give. His bravery in taking on this technically difficult part was never more apparent than during the complex song, ‘Putting it Together ‘. So much going on within the song, within the lyrics, and with all those around him, I found myself breathless and amazed from start to finish. His George had a sweetness unlike any of the others, while still maintaining the detached focused artist. His Act 2 George was even more appealing in the scared lost professional artist, struggling to find himself again, while also pretending to have it all together. 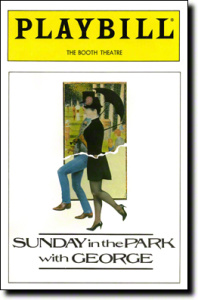 Ashford took a bit more convincing at the beginning. Straight off, I thought that she sounded too modern and American in her tone, and with her body language. But quickly, as she wound her way through her first number, ‘Sunday in the Park with George‘, I was forced to give in to her. Her singing was so beautiful and she gave such a heartfelt, warm, and fun portrayal, that I had no choice. With each moment, her performance grew in depth and emotionality, and I was under her spell. There is something deep and raw about this part; her resilience balanced with her distress and sense of loss, and Ashford delivered. She wants George to choose her over his art, but she also knows he can’t, and won’t. Ultimately, she understands that his focus and determination is what she loves about him. In Act 2, Marie, modern George’s grandmother and Seurat’s daughter, destroys me every time with the lovely and sad, ‘Children and Art’. Ashford again succeeds as both Marie, and then again as Dot returning to help George ‘Move On’. It’s a beautiful moment that these two share, and somewhere in the back of my mind I could only think, “what would these two be like in a fully staged production, with a real rehearsal schedule?” I can only guess that it would be sublime. 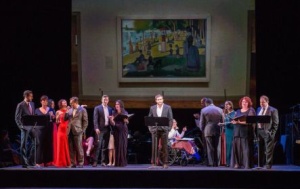 The rest of the cast also didn’t disappoint, keeping up the high level of expertise set by the two leads. Phylicia Rashad was perfection in her dual roles of the Old Lady (Seurat’s mother) and Blair Daniels, the art critic. (It’s a fascinated exercise; comparing the dual parts, and why the same actor is playing each in relation to the other. One could write a dissertation just on that.) Same could be said about Carmen Cusack as Yvonne in Act 1 and Naomi Eisen, the composer in Act 2. She brought such dignity to Yvonne, the ignored snobbish wife of Jules, (played by Zachary Levi), and such madcap fun as Eisen, the composer working with modern Act 2 George. Levi did well enough as a much kinder and gentler Jules, the other artist, who puts down George’s work, while also placing him up on a pedestal. As Yvonne says, jealousy is also sign of praise. He did better at playing Bob Greenberg, the Museum Director in Act 2. All the others do a grand job playing the dual parts required of them in the very different Acts. They are all pros and it shows in every moment and every detail. This is a difficult piece of musical theatre, every song, and it all came together magnificently. The glorious wall of sound that fills the theatre at the end of Act 1 is just plain exhilarating.

Much has been made of the lopsidedness of Act 1 and Act 2. Brantley of the NYTimes once wrote: “a lopsided piece — pairing a near-perfect, self-contained first act with a lumpier, less assured second half” and although he felt the 2008 Broadway revival brought it forward a long way, I have never really felt that unevenness. I love Act 1. It is nearly perfect. Even though Act 2 contains the awkward ‘Chromolume #7’ which I have never really seen visualized well, every other song in Act 2 resonates with such power and dynamic energy, that it always leaves me devastated, wanting more. I will say the same about this production. Musically gorgeous thanks to Music Director Chris Fenwick, this production succeeds marvelously, even in its simple staging. It still resonates with such joy and passion that it only makes me want to see it produced again in all its visual glory. Sunday in the Park with George thrills any day of the week.