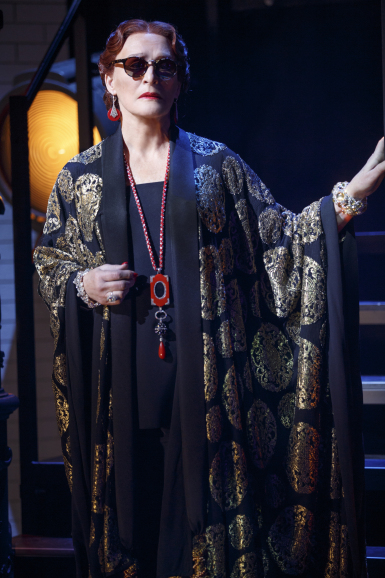 Sunset Boulevard: It’s Close, Glenn Close, But Not a Bull’s-eye

Sunset Boulevard: It’s Close, Glenn Close, But Not a Bull’s-eye 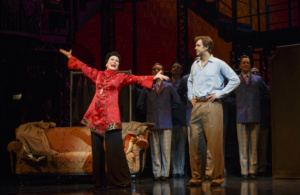 Glenn Close has returned to Broadway. Triumphantly.  To standing ovations after her big number in the middle of Act II. Starring once again in Andrew Lloyd Webber’s Sunset Boulevard, the show that gave her a third Tony Award over twenty years ago, she is bathing in the adoration that is rightfully hers. It seems this show, that won a total of 7 Tony Awards, including Best Musical, was waiting just for her.  Not a ‘come back’, just to be clear, as Norma Desmond hates that word, but a return to the spotlight. I remember seeing the show back in 1995 with Close and Alan Campbell.  It was the hot ticket at the time (although I rue the fact that I didn’t also see Betty Buckley, Close’s replacement) just as it is now. 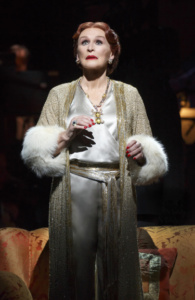 With this production, I can see why.  The score, by Andrew Lloyd Webber is lush and gorgeous for the most part (although many of the more narrative songs tend to become repetitive and boring as the show runs along for two and half hours).  The production, designed with an industrial criss crossing of staircases (James Noone: set design; Tracy Christensen: costume design; Anthony Powell: Close’s costume design; Mark Henderson: lighting design), very different from the lumbering monstrosity that slid in and out back in 1995, has placed the very large 40 piece orchestra center stage in full view.  There is no way to ignore the majestic sound of the music filling the theatre (Mick Potter: sound design; Kristen Blodgette: such supervision and direction: David Lai: music coordinator: David Cullen and Andrew Lloyd Webber: orchestration, vocal, and incidental music arrangements) and that is both a blessing and a curse to this revival. The orchestra’s work is both glorious and rich, like an old fashioned musical should sound. The downside is that at times the orchestra placement distracts from the very personal story that is being told on stage. It clutters the view. In some ways, Sunset Boulevard is a very sad and cynical tale of lost and broken dreams, and having the large ever-present lights and movements of an orchestra in the background takes some of the focus away from the intimacy and tragedy being acted out center stage. Especially distracting when gorgeous black and white projected footage of old Hollywood is distorted by the orchestra’s reading lights. A small complaint I know, but in general, the orchestra’s ever present visual keeps us at a distance from being immersed in the moment and the drama. 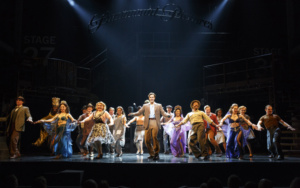 Close does dominates the stage starting with every entrance she makes, and we mourn the loss with every exit, as the drama deflates when she is not center stage.  As the faded silent film star, Norma Desmond, Close has only improved with age, unlike the neurotic woman that she inhabits on stage.  Her voice, although better than what it was, is still not the powerhouse that I dream of when I think of some of these songs (I couldn’t help but reminisce about hearing Alice Ripley, who actually portrayed Betty Schaeffer in the original Broadway production, belt out Norma’s big song at 54 Below last year – just stupendous). Regardless, Close gives Norma such a depth of character that even with the weaker moments vocally, the performance enhances her desperation concerning her fade from the spotlight. With all of Norma’s demented delusions, Close still manages to make Norma first and foremost a lonely desperate woman, rather than a ghoulish creature. She flickers back and forth from diva-like to despondent with a bat of an eye. She is truly the reason to see this production. 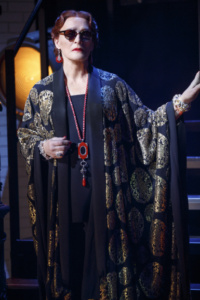 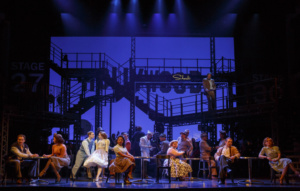 The other actors, Michael Xavier as Joe Gillis, Siobhan Dillon as Betty Schaeffer, and Fred Johanson as her loyal butler, Max von Mayerling are wonderful; vocally beautiful and selling the story as best as they can. But I can’t say that the book or lyrics (Don Black & Christopher Hampton) do them any favors.  Aside from the infamous second act song “As If We Never Said Goodbye” and the endearing “With One Look“, most of the writing feels, oddly enough, rushed and plodding all at the same time.  The title song, “Sunset Boulevard” magnificently performed by Xavier, is trapped in my head since seeing the show, but not necessarily because of its beauty. There is power and a great hook in that song, but sometimes, as it is throughout the show, the music and lyrics are simplistic and melodramatic. Bombastic and too grandiose; it reminds me of Phantom of the Opera, which, to this day, I don’t understand the show’s lasting appeal.  As directed by Lonny Price, with choreography by Stephen Mear, there are lively and engaging moments of fun and movement (i.e. the New Years Eve party song, “This Time Next Year” and “Schwab’s Drugstore“) but they are surrounded by exposition and a narrative that don’t register emotionally. The two makeover scenes, one for Joe Gillis “The Lady’s Paying“, and one for Norma, “A Little Suffering“, border on the ridiculous (and slightly offensive), while others are just mundane. 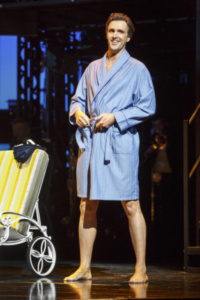 As it was once described by critics, this is a show that is all about the star, and when the star is not on stage, it’s about being big, not great, just big.  In this revival, the grand staircase and set pieces are gone, so the ‘bigness’ must come from the music. The orchestra does its job well, as does the cast, but it’s not quite enough to sustain our attention. When the show is attached to Close and her Norma, Sunset Boulevard works, but without that star power, it shrivels down to a very pedestrian tale that doesn’t have the power to intoxicate.  Sunset Boulevard is a windy road, with ups and downs galore, and like any mountain hugging road, the beautiful scenery is only seen from one side of the car.  I’m not sure it’s worth the drive down this Sunset Boulevard, as only about half of it has the great view. 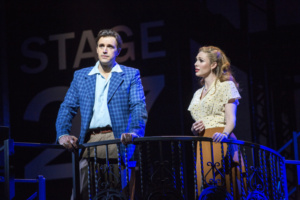