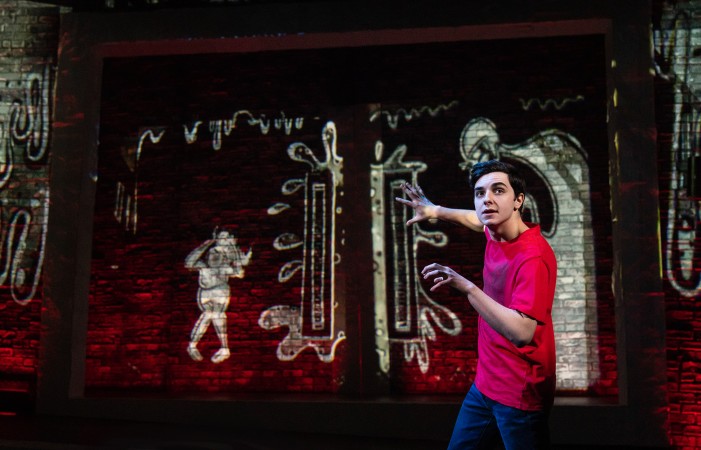 There is much to like about Superhero, the new musical at Second Stage. The cast is first rate, the music and lyrics by Tom Kitt, are charming, if not forgettable, but there are so many holes in Josh Logan’s script and the comic book drawings seem lackluster, that one wonders why this wasn’t workshopped first.

Kids who are into comic books will not be impressed by this. These days those kids are savvy. Also all the angst takes too long to get to and not worth the effort, yet the premise of a kid’s father dying in front of him due to negligence should stir us.

We meet Simon (Kyle McArthur), who’s dad died 2 years ago in a tragic accident, which we do not learn how until 9/10th of the way through. He has withdrawn into the world of comic books drawing his own. His mother, Charlotte (Kate Baldwin), wants him to open up but the more she wants the more sSimon withdraws to the fire-escape. His landlord (Thom Sesma) has a comic book he wants and his next door neighbor Jim (Bryce Pinkham), is a superhero in disguise. In the meantime Simon is crushing on Vee (Salena Qureshi).

With one too many love stories or in this case anti love stories and dropping everything towards the end because it has already been over two hours, Superhero’s plot just seems unfinished. I had more questions like the landlord. Why make so much out of the comic book he has? The death of Simon’s father, sadly you make us with the entire show and it doesn’t seem that traumatic. Also why are all the love stories dismissed? This made for a very unfulfilling musical and a depressing one at that.

Baldwin does her best with this poorly written role, who gets the worse lyrics possible. She breathes fresh air into a rather staid environment. Salena Qureshi is adorable as Vee, but is again underwritten. Jake Levy and Julia Abueva as Vee’s ex and bestie are barely there. Thom Sesma makes us want more for his character and yet, he is there and then dropped. Kyle McArthur is strong as Simon and manages to show some dimension despite being written as an annoying human being. We actually do want to see him get some happiness out of the ending. Bryce Pinkham makes us want to put our arms around him and tell him it will be ok. Together with Ms. Baldwin we root for a connection and are bereft when it doesn’t come. I can not wait to see Bryce play Sam in Benny and Joon over at Paper Mill.

The music by by Tom Kitt, is actually beautiful, but the lyrics need work and we need some songs we can hum or at least remember. The book needs to go back and storyboard.

This show has some great idea’s, they just need to be fleshed out and honed. Right now this just feels like a workshop with an impressive cast.

Suzanna BowlingApril 9, 2021
Read More
Scroll for more
Tap
Death Of A Driver Makes You Question
Kiss Me Kate Where The Hell Cat has Been Tamed Into a Beautiful Sophisticated Songbird