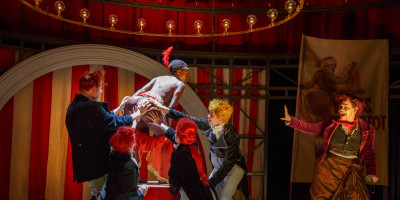 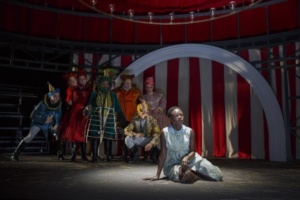 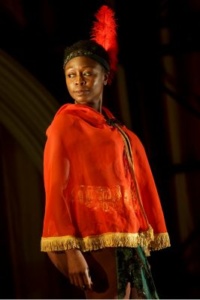 The exploitation of the human race, is one of the most deplorable things on this planet. In the revival of Suzan-Lori Parks (Topdog/Underdog, Father Comes Home From the Wars (Parts 1, 2 & 3), 1996 Venus, follows a true life tale of Saartjie Baartman’s (Zainab Jah) otherwise known as the Hottentot Venus. Like most racially charged plays, a major fact has been bastardized. In the play the person that sells her into exhibitionism and slavery is a white man, but the truth was he was a black man, a slave owner.

From the beginning and through out the play Venus is given choices. Due to her enormous buttocks, she arrives in London in 1810 to be placed into a theater of human oddities. In real life she was exploited for economic profit by two men, Baartman’s black South African master and Hendrik Cesars. In Venus,  gone is the black man and Cesars is there for a nano second, leaving the villainy to a women, who never existed in history. Venus, was abused, but was into the power of money. When abolitionists in London, try to rescue her, Venus herself seals her fate by denying the charges. Her choices were return to South Africa, where she would go back to being a servant or be exploited and  received a small wage and her freedom. 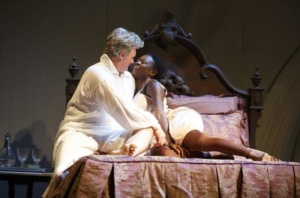 In act two Georges Léopold Chrétien Cuvier a French scientist (John Ellison Conlee) appears, claiming to be in love with the Venus Hottentot and wants to rescue her. He makes her his lover and uses her for scientific experiments in which she is needs to be postmortem to continue. He sells her out and she dies with the clap, freezing, naked and to be cut up and used in museums until it was deemed cruel. Again this part is also embellished because the Venus Hottentot was sold to an animal trainer who abused her and then to Cuvier. Saartjie Baartman died at 26, broke, misused and unloved.

Plays like The Elephant Man and the musical come to mind as the play is highly poetic, theatrical with a bleeding of song. The script skips around in time so in a way things are never fully coherent and seem dream like, well more of a nightmare. Zainab Jah is prolific as Venus. She shows us her Venus layer by layer, as she is stripped and pawed. Mr. Conlee and Kevin Mombo as the narrator of sorts, stand out and bring grounding to the piece.
Lear deBessonet staging is interesting as he adds a macabre circus like staging to jar us out of complacency.

The set by Matt Saunders and Lighting by Justin Townsend are first rate.
Thanks to Ms. Parks, I learned a part of history, I did not know. I just wish she had gotten who sold Saartjie into slavery right, for though the whites continued the crime, the original sinner was one of color.
Venus: Pershing Square Signature Center, 480 W. 42nd St. until June 4th.
Related ItemsHottentot VenusJohn Ellison ConleeNewSaartjie BaartmanSuzan-Lori ParksVenusZainab Jah
Off Broadway