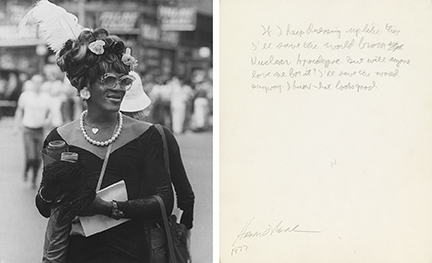 On Thursday, June 20, Swann Auction Galleries will hold their first Pride Sale, a curated auction featuring archives, literature, autographs, art and photography from the last two centuries, chronicling the lives of LGBTQ+ heroes and the history of movements, parades and protests.

“Swann is thrilled to be hosting its inaugural Pride Sale auction and proud to continue supporting the community through a fundraising effort alongside the auction,” says President of Swann Auction Galleries, Nicholas D. Lowry. “We see this as an important and unique event among the many happening this June, recognizing the historical, literary and artistic achievements of LGBTQ+ writers, artists and activists.”

Among the many items up for auction included is an archive of personal effects of Candy Darling–enduring trans icon, American actress and Warhol superstar. The archive features letters, photographs, including a polaroid of Darling very likely taken by Warhol, her personal datebook and diary for 1970 inscribed “If found call Andy Warhol Films…” and heart-patterned sunglasses ($20,000-30,000). One memo in which Darling talks about finding love reads: “…I feel that someone like me has a very limited chance for happiness. I must find out whether it’s right and good for me to be a female, and can I ever be a woman? My first desire is to be right & have a husband. I will ask for no more. In that pleasant state I would be content for the rest of my earthly days. I am 26 years old. Time to think, time to do. Time to practice–all I believe is right.” Darling’s life was cut short by lymphoma in 1974 at age 29.

The top lot of the sale is an archive of 134 photographs by Hank O’Neal taken at Pride parades in New York City throughout the 1970s. The images depict groups marching, signs and celebrations, as well as noted figures of the era, including scarce photographs of Marsha P. Johnson. Each print has been poetically annotated by Beat Generation writer Allen Ginsberg ($70,000-100,000). Additional NYC Pride parade images include an album of 342 chromogenic prints from 1997-98 ($800-1,200), which, in contrast with the O’Neal photographs, demonstrates the evolution of Pride from its inception while capturing the spirit of the parade pre-sponsorship.

An autograph letter signed by Harvey Milk as Acting Mayor of San Francisco, March 7, 1978, takes the spotlight in a selection of autograph material ($4,000-6,000). The note is written to leading LA-based activist Don Amador, who taught the first Gay Studies course in the US, and his husband Tony Karnes. It exclaims: “Thought you should have a memo from the 1st upfront gay mayor of any city–it’s for real!!!” A witty ALS by Gertrude Stein to Arthur Rubin, apologizing for a delayed response to a 14-year-old letter ($600-900) and a letter signed by Frederick the Great to the President of the Regency of Cleves Baron von Danckelmann, 1764 ($400-600), also feature.

The full auction catalogue is available at swanngalleries.com or on the Swann Galleries App. The printed catalogue features an introduction by Eric Marcus, founder and host of the Making Gay History podcast. Swann Galleries and participating consignors will be donating a portion of their commissions to benefit The Leslie-Lohman Museum in New York City. Exhibition free and open to the public starting June 15

Additional highlights can be found here.

Swann Auction Galleries is a third-generation family business as well as the world’s largest auction house for works on paper. In the last 75 years, Swann has repeatedly revolutionized the trade with such innovations as the first U.S. auction dedicated to photographs and the world’s only department of African-American Fine Art. More than 30 auctions and previews are held annually in Swann Galleries’ two-floor exhibition space in Midtown Manhattan, and online worldwide. Visit swanngalleries.com for more information.–