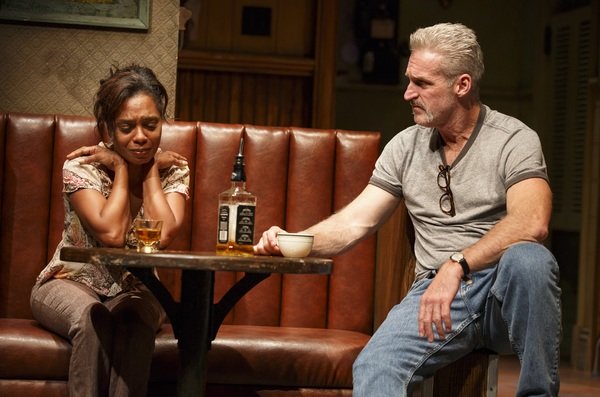 Sweat The Evaporation of Middle America

Sweat The Evaporation of Middle America 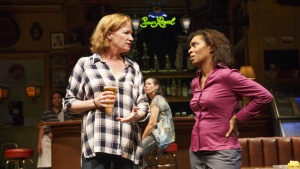 Pulitzer prize winning Lynn Nottage (Ruined)’s new play, Sweat gives us a view into just a few of the lives affected by the evaporation of manufacturing jobs in the USA, and in particular, of the decimation in Rust Belt Reading Pennsylvania. With the decline of factory work, NAFTA and TPP being a large issue this election year, it is a timely play. 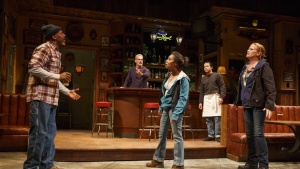 The company of Sweat (Joan Marcus)

In 2011, Reading was declared the poorest city in the nation and Nottage spent months there interviewing local business owners, community organizers, historians, politicians, the homeless, drug addicts et al. These interviews became the basis for Sweat (originating last year at Oregon Shakespeare Festival) which criss crosses back and forth in time from 2000 – 2009 to the present. 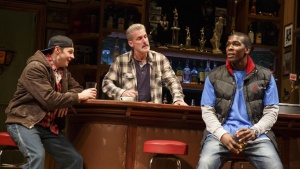 These years turn out to represent the heady calm before the storm, events surrounding the sinking of the company ship and the destruction left in the wreck’s aftermath as the play opens on to a parole meeting in the present year. Here, two young men are alternately interviewed by the same PO (an energetic Lance Coadie Williams)-the aggressive and defiant Jason (a tightly wound Will Pullen), his face scarred with menacing tattoos, and Chris (an unsure regretful Khris Davis) who clutches his pocket Bible throughout. They allude to each other-and to a heinous event in which they participated 9 years earlier. 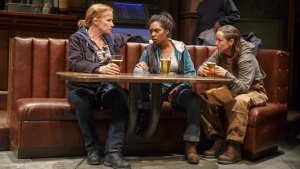 The turntable set brings us to the bar where most of the play takes place (John Lee Beatty’s oddly out- of-place Upper East Side looking bar seems more in line with the college kid-attracting establishment it later becomes than an intimate go-to watering hole for factory workers). The TV broadcasts politics- Bush running, and later as president.

Here we meet the three girlfriends, Tracey (a rough and tumble hardy Johanna Day) and Cynthia (a convincing driven Michelle Wilson) Jessie, and bartender Stan. These four have worked in the steel tubing Factory (seemingly one of the only remaining local Industries) for three generations, Stan (a sturdy affable James Colby) having worked 28 years until leaving after the accident which left him lame.

They’re a tight bunch and strong ensemble work makes it easy to believe these characters have been sharing life’s ups and downs in this bar for years. That is– until Cynthia and Tracy decided to try for a position offered by the company (which Cynthia wins) and the possibility of job reductions at the factory comes nearer to a reality. As Cynthia becomes caught in between her thankless managerial duties and the interests of her friends in the union the tight camaraderie disintegrates. Despite the union, it starts to be obvious many jobs will be eliminated and the characters become people just battling to get by as the company pits them against each other, asking for concessions, then abandoning them altogether.

Sides have been picked and lines drawn; it becomes clear this friendship will not recover.

All who enter the bar are union save Oscar, the Columbian but assumed Puerto Rican, bar back. Oscar (in a gentle understated performance by Carlos Albàn), works overlooked and quietly behind Stan – until it is noticed he intends to become a scab.

In this strong union city/town/bar, this is the one line that must not be crossed. Jason and Chris’ misplaced anger and rage (they’re plant workers too) leads to a violent act which ultimately destroys the lives of five people (in a fight scene which desperately needs to be reworked).

Kate Whorisky directs this often funny but eventually heartbreaking (the top of the final scene packs a wallop) play very well and gets all she can out of her actors. However, Nottage seems to have a few plays going on here at once. “Sweat” looks at the complex Father/son relationship ruined by addiction (Cynthia’s husband, and Chris’s father, Bruce turns to heroin after having been locked out 98 weeks and counting). It looks at two Mother/son relationships with very different outcomes – one offers hope for a shared future however dour it may be and the other has been inexplicably ravaged and is at its end.

We see the ties of friendship severed by opposing loyalties and strains of prejudice (Tracey comes to believe Cynthia got the promotion only because she is black) and two young men’s friendship fissured because of their inability to live with the heinous act they committed.

After the fine character studies Nottage has given, what we don’t see happening or why, is what was Bruce (a top notch potent John Earl Jelks)’s story? After their incarceration, why did the two mothers respond so differently to their sons as the play wraps up? What causes two human beings to react so very differently to the same event-where one scars his face with hostile tattoos (which masterfully appear and disappear credit to Leah J. Loukas) and the other carries a bible? Why does Chris come to hope religion will guide him out of the Abyss into which he has fallen whereas a defiant Jason is aggressively going nowhere? And ultimately the Friendship of these two young men who want to kill each other, yet when all hasn’t been said and done, and up hugging?

The socio-economic issues the playwright has so deeply researched however, never feel forced. This is a play about loss, change and the downward spiral into ugliness and drug dependence when no solution to the question, “What follows?” is offered. When your job/ way of life/ ability to be self-reliant/ identity/ freedom/ options are removed from you, and in this PA factory town where generations of proudly middle class people have been “ Union to the end”, what recourse is left to you?

In this pressure cooker of a play, the lid of which has been blown off from the top of Act I, we recognize the very important topics raised, but I was ultimately more interested in the interpersonal issues of the play I didn’t get to see.