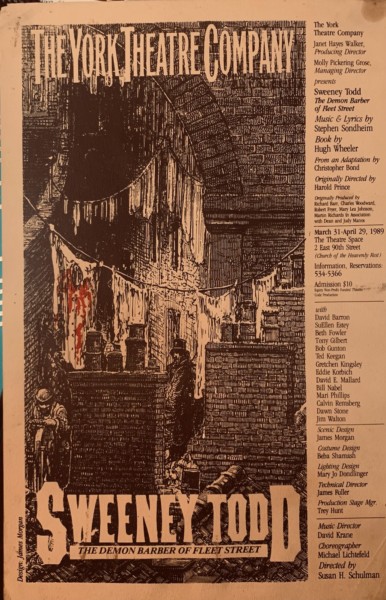 Join the York Theater Company as they revisit the 1989 York Mainstage Revival of the 1979 Tony Award-winning Best Musical Sweeney Todd: The Demon Barber of Fleet Street with music and lyrics by Stephen Sondheim and book by Hugh Wheeler, based on an adaptation by Christopher Bond.

Presented by The York, Sweeney Todd received its first New York revival at The Church of the Heavenly Rest on March 31, 1989 where it continued through April 29, 1989. The production transferred to Broadway where it played 188 performances at Circle in the Square from September 14, 1989 through February 25, 1990. The Circle in the Square production received four Tony Award nominations and became known as “Teeny Todd” when parodied in Forbidden Broadway.

PLEASE NOTE: This is a panel discussion of The York / Circle in the Square production, NOT a performance.