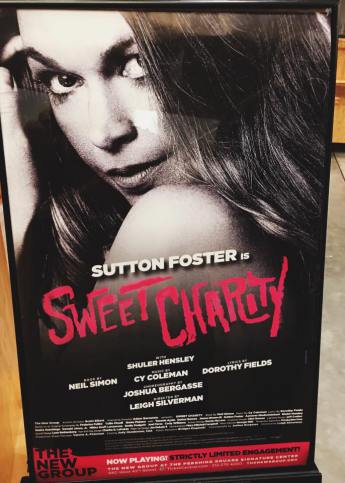 Sutton Foster. Now that’s a big Broadway draw for The New Group’s production of Neil Simon (book), Cy Coleman (music), and Dorthy Field’s (lyrics) iconic musical revival, Sweet Charity. After she blew my mind in Anything Goes a few years ago at the Roundabout, I’ve been waiting to see her center stage again in a big dance heavy classic. And this show just sounded like a perfect fit. And it is. Pretty much. 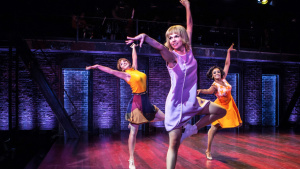 The musical is filled with priceless musical and dance numbers.  One gem after another, ripe for stylized choreography and fun musical vocalizations. I give a lot of credit to choreographer Joshua Bergasse (On the Town, Gigi) to take on this small stage off Broadway revival. One must feel the weight of Bob Fosse (and Gwen Verdon) hanging over every interpretive decision made. His imprint on how we see and and hers in how we hear this show is firm and strong. Add to that, Shirley MacLaine’s legendary performance in the 1968 movie (directed by Fosse) and we are hard pressed to erase those sky high expectations. So both director Leigh Silverman (Violet)  and Bergasse have to find a way to satisfy our expectations and also place their own personal stamp on it. And in general I think they succeed. Pretty well. It helps that the show is being staged on a thrust rather then the typical proscenium (like the last Broadway revival in 2005 starring Christina Applegate/Charlotte D’Ambroise) giving it a sight line differential that makes imitation impossible. This is no more evident then in the spectacular number, ‘Big Spender’ which carries so much historical weight, but those expectations only float in and out of our minds as Bergasse utilizes Nickie (Asmeret Ghebremichael), Helene (Emily Padgett), Carmen (Nikos Graff Lanzarone), Elaine (Sasha Hutchings), Betsy (Yesenia Ayala), and finally, coming in midway, Charity (Sutton Foster) in a spectacularly inventive way, giving us all the grit and the bored sexuality that is needed. It’s a great start. And these women, as the dance hall hostess brigade, are perfection, with all their precision and angular sensuality. 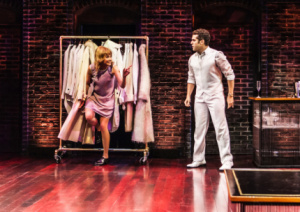 The only trouble that sneaks in to this show is sometimes Foster doesn’t seem to be like all the others. Maybe that’s not a bad thing, as she basically is not like the others. There is something more fluid and refined in her body movements that I couldn’t quite shake off. I’m not saying she didn’t do the part justice, because she truly does shine as Charity, making it gleeful and optimistically joyful. Occasionally though, and maybe that’s the point, she lacked a brittleness or edginess that the others elicited. It was the most apparent in “There’s Gotta Be Something Better Than This” which has a desperation mixed with dreamy naivety that worked with the spectacular Ghebremichael (Nickie) and Padgett (Helene) but seemed less organic for Foster. Maybe Foster carries a sense of accomplishment that makes the edgy neediness dissipate, as we internally believe Foster can do anything she sets her mind upon. Ghebremichael and Padgett manage to give us the desperation and maybe a bit of defeat these women need in every sharp movement. These two brilliantly shine again in the Act Two number, “Baby, Dream your Dream”, which accentuates their emotional damages perfectly. 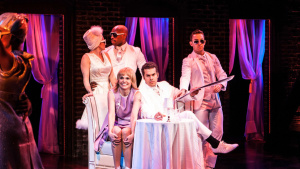 Solo numbers, such as “If My Friends Could See Me Now”, the opener- “You Should See Yourself”, and the finale- “Where Am I Going?”, are the moments that Foster truly shines, performing with excellence, humor, and true depth. Standing center stage and stealing our hearts with every shrug and smile. It’s not surprising that Oscar, (a wonderful Shuler Hensley) falls for her so sweetly. Their duet, “I’m the Bravest Individual” is comic genius and his solo, “Sweet Charity” is exactly as it should be, kind, loving, sweet, with a gint of surprise. I can’t quite get it out of my head. Joel Perez (Fun Home) matches Foster’s excellence playing numerous roles, all exceeding well.  Singing Herman’s lovely sweet and sour song, “I Love To Cry at Weddings” and Vittorio Vidal’s ballad, “Too Many Tomorrow’s”, Perez nails both wonderfully. The bigger dance number, “The Rhythm of Life” feels a bit messier and unfocused in comparison, but Perez’s vocal abilities still do the job. 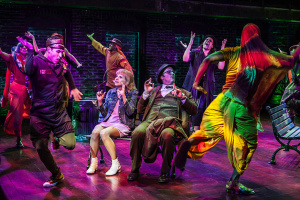 The real excitement in this show, beyond all those beautiful songs, is the dancing. And this is where the show flips back and forth from excellent to good. Fosse is a difficult one to supersede, and the epic quality of a larger stage production would have elevated “Rich Man’s Frug” and “The Rhythm of Life”, but in the smaller numbers the thrust gives us an intimacy and style we are grateful for. So this Sweet Charity leans more to the song over the dance. But that’s nothing to shake your foot at. Fosse can rest easy, his legacy stays firmly in tact. And the show still shines bright regardless, and that we can all be truly thankful for.  Now the question remains: Is this show Broadway bound? I sure hope so, I think it would only improve with a large scale and scope. 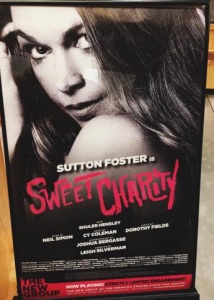 Suzanna BowlingMay 16, 2022
Read More
Scroll for more
Tap
A Difference of Opinion Gets You Personally Attacked
Party People A Mini Hamilton For The Black Panthers And The Young Lords