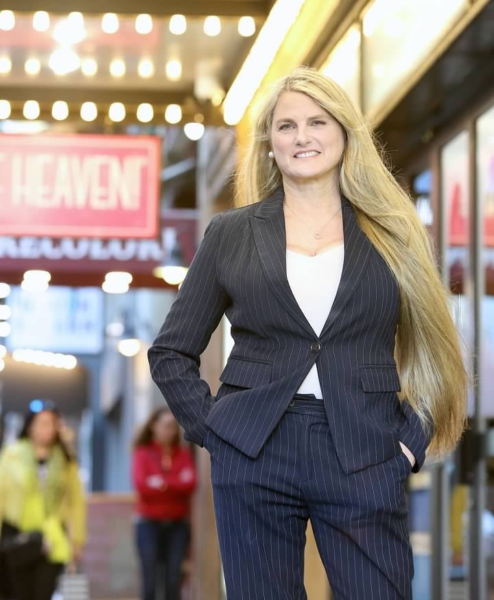 June 1, 2021 – The Drama League (Artistic Director, Gabriel Stelian-Shanks; Executive Director, Bevin Ross) which, since 1916, has been at the forefront of the American Theatre community, providing theater directors with prosperous support, announced today three-time Tony Award-winning producer, CEO, and Founder of BroadwayHD Bonnie Comley will become the organization’s new Board President.  Traditionally held by a leader in an outside field, Comley takes the helm of the Board as the organization’s first Broadway industry leader to hold the position in over 50 years – a key benefit coming out of these turbulent times. Having been elected to three terms as Vice President of The Drama League, and serving on the Board since 2009, Comley succeeds Stan Ponte, who steps down due to term limits and will remain on the Board of Directors. Additional officers of the Board for this term will be Vice Presidents Joseph Pizza and Arthur Pober, Secretary Donna Daniels, and Treasurer Tony Benten. An award-winning member of the New York theater community, Comley has also been recognized as a Top Silicon Valley Entrepreneur to Watch in 2021. As founder and CEO of BroadwayHD, the world’s premier online streaming platform delivering over 350 premium live productions to theater fans globally, Comley & BroadwayHD provided a bright path forward during the closure of theater worldwide due to the COVID-19 Pandemic.  “I am honored to have been elected President and I am thrilled to lead The Drama League during these unprecedented yet promising times,” says newly elected Board President Bonnie Comley. “My career has taken me to the intersection of theater and technology – and both aspects have fueled my excitement about holding this position. As a Broadway producer, I have seen and heard firsthand how the support of the Drama League has propelled the careers of the talented alumni of their Directors Project. As live theater restarts, digital theater will remain as an additive, more inclusive, and expansive piece of the industry, which is now ready to embrace the possibilities it can provide. And while we will always celebrate and foster the work of the live stage, The Drama League will continue to train and include the work of theater directors who also work in the digital space, and I cannot wait to share my experience with the next generation of stage directors.” “Bonnie has been an integral part of The Drama League for over a decade, and her elevation to this role simply lets the world see her incredible commitment to the next generation of artists for Broadway and beyond,” noted Artistic Director Gabriel Stelian-Shanks.  “As President, Bonnie will encounter a shifting theatrical landscape, recovering from a global shutdown and facing a complex future. Arts supporters and philanthropists must rally in this moment, and Bonnie is born to lead this charge. I am thrilled to have her expertise, wisdom, and enthusiasm in this singular moment of transformation.” “Bonnie is uniquely qualified to lead our Board of Directors during this unprecedented moment,” says Executive Director Bevin Ross. “As an entrepreneur in live theater streaming, who is deeply connected within the theater community, she is the leader we need now as we look to the future of theater in America. We are facing a number of challenges as our industry re-builds, and Bonnie has stepped up with energy, creativity, a commitment to philanthropy, equity and the broadening of our network to better serve our artists. She is the ultimate hype-woman for our stage directors and the audiences we serve. I’m overjoyed to welcome her and the resources and talent she will draw to our organization and Board of Directors. It is going to be a thing of beauty to watch!” The organization’s previous Board president, Stan Ponte, has stepped down after four years of serving the organization in the role, which is term-limited. Ponte led the Drama League through several milestones, including the development of its current strategic plan, the programmatic expansion of its annual festival DirectorFest, and the creation and execution of the Directors Emergency Relief Fund, which awarded over $40,000 in microgrants to dozens of directors early last year amidst a shutdown of stages across the country. Comley’s unique skill set, a merging of theater prowess and technology, has proved invaluable to The Drama League over the course of the last 16 months as the organization’s programming is abundant with digital capture. Last month, The 87th Annual Drama League Awards Ceremony took place virtually and celebrated theatermakers who created digital and socially-distanced work during the 2020-2021 season.  The organization also showcased the work of young directors across New York City in New Visions/New Voices does… Shorts. Both events are now viewable online at dramaleague.org.

The Drama League will next premiere its 2021 DirectorFest Monday, June 7 online. The multi-week director-focused festival, which typically takes place in January, will highlight the work of the organization’s New York Directing Fellows. The four digitally captured shows – the bull-jean stories, The K of D, Unfuckwithable, and A Girl’s Bedroom – will premiere on The Drama League’s YouTube page on June 7, 9, 14, and 16 respectively. Each production will stream for one week. To learn more about DirectorFest, visit directorfest.org.

Bonnie Comley is a three-time Tony Award-winning producer. She has won an Olivier Award and two Drama Desk Awards for her stage productions. She is a member of The Broadway League and serves on their Audience Engagement and Education Committee. Comley has served on The Drama League Board since 2009. Comley was recognized as a Top Silicon Valley Entrepreneur to Watch in 2021. She has produced over 40 films, winning nine Telly Awards and one W3 Award. She is the founder and CEO of BroadwayHD, the world’s premier online streaming platform delivering over 350 premium live productions to theater fans globally. In 2016, Comley and BroadwayHD made the Guinness World Record for the First Live Stream of a Broadway Show. BroadwayHD is the 2020 recipient of the Global Business Excellence Award for Outstanding Innovation and Global Business Excellence Award for Outstanding Product/Service.  Comley was selected as an Industry Leader in Cynopsis Women in Media Class of 2020. In 2019, Charlotte St. Martin, President of The Broadway League presented Comley with the Woman of Achievement Award from the WP Theatre. Comley is a Member of Portfolia and their Rising America Fund investing directly in early-stage and growth companies in the US where people of color and LGBTQ investors see opportunity for returns and market impact.    The theater community has honored Comley for her philanthropic work; she is the recipient of The Actors Fund Medal of Honor, The Drama League Special Contribution to the Theater Award, The Paul Newman Award from Arts Horizons, and The Theater Museum Distinguished Service Award. Comley’s educational honors include The Distinguished Alumni Award from Emerson College and The Distinguished Alumni Award from the University of Massachusetts and the business honor society Beta Gamma Sigma. The Music Theatre Program at Boston University is named in her honor, The Musical Theatre Society Room at Emerson College bears her name, the 500-seat theater at the University of Massachusetts Lowell is known as the Comley-Lane Theatre, and The Stewart F. Lane and Bonnie Comley Stage is housed within the Booth Arts Complex in Boston.  Comley has been a keynote speaker or panelist at The Broadway League’s Road Conference, BroadwayCon, C2E2 (Chicago ComicCon), SXSW, Goldman Sachs & Co.,The Wrap, Theatre Resources Unlimited (TRU), NYC TV Week, TV of Tomorrow,Crain’s New York Arts and Culture Webcastand City National Bank Women Entrepreneurs, and taught masterclasses or guest lectured at Columbia University, New York University, Emerson College, NYFA, Five Towns College and UMass, among others.

The Drama League of New York, since 1916, has been at the forefront of the American Theatre community, providing talent, audiences, and prosperous support. The Drama League advances the American theater by providing a life-long artistic home for directors and a platform for dialogue with, and between, audiences. The Drama League opens doors for exceptional stage directors by providing time, resources, and space to work without restriction, while augmenting skills through personalized training, production opportunities, and professional development. The Drama League carefully selects directors whose vision and talent are unparalleled, with a clear commitment to the craft, the field, and audiences.Through our work, The Drama League celebrates the important role theatergoers have to the future of the industry, and champions the impact theater plays in civic life. The Drama League breaks the formidable barriers that impede success in the arts. These directors, nurtured and empowered by The Drama League’s support, are trained to create the most rigorous work possible, as a live exchange between artists and audiences. In doing so, we elevate the conversation, deeply impacting theaters and their communities. Bringing people together to celebrate difference, share experiences, and discover common ground are crucial needs served by the work of Drama League directors. This necessary cultural practice is the foundation of our shared humanity.