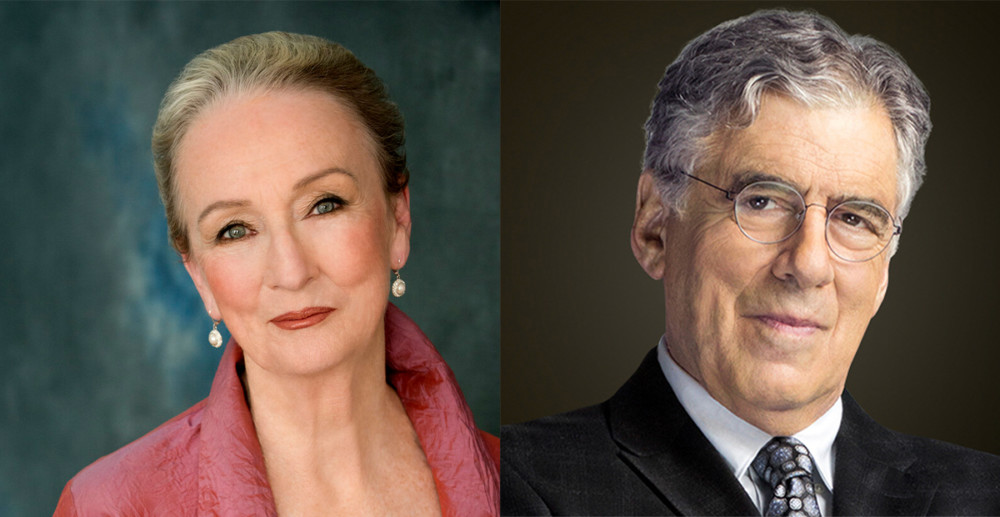 Love gets a second chance in the live stream play We Have To Hurry, a new work by acclaimed playwright, actor, and director Dorothy Lyman and starring Kathleen Chalfant and Elliott Gould. We Have To Hurry is about a pair of mature people reigniting their spark in life’s third act. The show will stream live via Broadway on Demand for two performances only, Saturday, May 1 at 8pm and Sunday, May 2 at 3pm.

T2C: Had you known Dorothy Lyman before working on this play?

Kathleen Chalfant: I knew Dorothy in the 70’s and 80’s our paths crossed, but we didn’t know each other well.

T2C: What about Elliot Gould?

Kathleen Chalfant: About 4-5 years ago we worked on the TV series of “Doubt.”

T2C: What drew you to We Have to Hurry?

Kathleen Chalfant: Sex among the elderlyAlso that it was written by and from the viewpoint of the elderly.  This play says that you don’t die after 70. I am 76 and I feel that way. We go on for a LONG time, the lucky ones. We are inventing this new way of life since we don’t really have role models for it.

T2C: What kind of plays inspire you?

Kathleen Chalfant: The play I’m doing at the moment. I am working on four different projects and they each touch me in a different way. One upside of the pandemic is you get to work on multiple projects since you can project yourself through cyberspace and be in many places at once.

T2C: What is your perfect project?

Kathleen Chalfant: I would like to be certain that what ever it was, was addressing this time that we are all living though. This time of isolation, has loss in it it. This is a time people have had to come to terms with themselves. We are the lucky ones who have had the luxury of being able to stay home in these times. Actually I am working on four projects and they all meet these criteria. I am doing a monologue about a sand crane and certainly Dorothy’s plays talks about the pandemic and finding loves of all kinds. Its kind of sexy. One of the characters says that time has passed for sex and love with the elderly. The fact is it hasn’t.

T2C: Did you know when working on Tony Kushner’s Angels in America: Millennium Approaches that is was a game changer?

Kathleen Chalfant: Yes, we did know. It was something extraordinary. It was actually being developed in two tracks. One in San Francisco where it was commissioned and one in New York. At one point it melded. I was asked to work on it in the spring of 1988 by Tony. In 1989 in went to the Mark Taper Forum. We Thought of it as our day job. t was written for Stephen Spinella. Ellen McLaughlin, the Angel, and I joined the process soon after and all three of us made it to Broadway.

T2C: In Wit you won the Outer Circle Critics, Drama Desk, Obie and Lucille Lortel awards and had to shave her head for the role. How difficult was that for you?

Kathleen Chalfant: Yes, it was very difficult. I started the show at Long Wharf. I thought it wouldn’t last very long. The hardest thing was a year later and to have to shave my head again in cold blood. We tried to use a bald cap, but it would have taken everybody’s tech time for the next 4 years. I got used to it. The wigs did come in handy for other projects later on and for my grandchildren to play with.”

T2C: You have worked a lot in TV with “House of Cards,” “Law & Order”, Margaret Butler in “The Affair” on Showtime and so many more. What do you like better?

Kathleen Chalfant: It’s a different kind of work and I have been many characters. Its not so hard working on TV and it is satisfying. It’s fun and technically interesting. It is a different kind of satisfaction. Theatre is live and you are making the experience with the audience in real time.

T2C: At the Rattlestick after I saw you in Saint Vincent’s Project: Novenas For A Lost Hospital we talked. Can we bring some of that conversation here?

Kathleen Chalfant: The play effect me in so many ways I lived through the AIDS crises. My older brother was my glamorous gay brother. He didn’t die of AIDS, but many close friends died and especially a really close friend in 1981. I was working and I remembered the heroism of those who gave of themselves in the battle. It was profoundly moving to walk to the fountain. I felt this piece was very important.

T2C: You advocate for art and artists in advocating for civil rights and social justice, and “theater as a platform for social change.” What would you say to today’s climate?

Kathleen Chalfant: I hope that the movement that began in response to the murder of George Floyd continues to grow so that we can try finally to make this country reflect what is the best of it.Every single person deserves a decent, just life and we must remember that except for the first nation people no one is from here.  This country was founded in genocide and it’s economy was based for a long time in slavery, so all of us who have benefited from these circumstances have an obligation to live in such a way as to justify the terrible sacrifices that have been made to produce our privilege.  The people in the street this summer made it seem possible that we might be able to do that as a nation.

I have been enormously lucky to have been able to do my work in this time and I am deeply grateful for those who have made it possible.

In keeping with the play’s touching message, all proceeds from the live stream of We Have to Hurry will be donated to The Actors Fund Home East and West. Owned and operated by The Actors Fund, the residences offer short-stay rehabilitation, assisted living, skilled nursing, and memory care services for individuals who have dedicated a major portion of their professional lives to the performing arts and entertainment.

Tickets for the live stream of We Have to Hurry are priced at $15 per household and are valid for one live stream performance only. The performance schedule is as follows: Saturday, May 1st  at 8pm and Sunday, May 2nd at 3pm  For more information and to purchase tickets, please visit https://www.broadwayondemand.com/channels/details/we-have-to-hurry

Suzanna BowlingApril 20, 2021
Read More
Scroll for more
Tap
France Lets Go A Murder Because He Can Not Be Held Criminally Responsible Because He Was High As New York Legalizes 4/20
What to Watch in The New Year: April 25