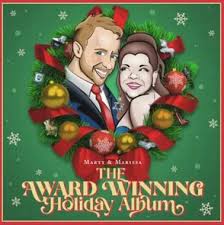 Broadway’s Marty Thomas (Wicked, Xanadu, The Secret Garden) and Marissa Rosen (Kristin Chenoweth: For The Girls), are celebrating the holidays with their debut duet album with “The Award Winning Holiday Album”. T2C talked with this best friend duo about the album, the holidays and life

The album was released on December 5th, 2020 and is available anywhere music is digitally streamed. Marty and Marissa are widely known as Broadway best friends for close to ten years. They are often adding harmonies together, to prominent projects in the cabaret/concert world and in the recording studio. Last year they were heard on Jessica Vosk’s debut album “Wild And Free” on Broadway Records. They met performing in the off-Broadway musical “The Big Gay Italian Wedding” and parlayed their natural report into a very successful nightclub act.

“The Award-Winning Holiday album” pairs comedy with music, covering standard holiday classics like “(Everybody’s Waitin’ for) the Man with the Bag” and some modern gems like their unique take on Sia’s “Puppies Are Forever”. Marty and Marissa even took on a musical theater holiday tune from “ELF”’, “There Is A Santa Claus”. Thomas acting as vocal arranger and executive producer, musical arrangements, and additional production were offered by Yasuhiko Fukuoka, Alex Hamlin, and Stephan Seiler. The final product was mixed and mastered by Yasuhiko Fukuoka.

Marty is a recording artist and an actor who made his Broadway debut at age eleven as Colin in The Secret Garden He also appeared on Broadway in Wicked and Xanadu. He was named Mr. Broadway 2008 and was a 1992 Ed McMahon’s Junior Vocalist Star Search Champion beating a then-unknown Britney Spears. He has appeared off-Broadway in My Big Gay Italian Wedding, Pageant and A Loss Of Roses. He was featured in the film Big Gay Musical, plays Damon’ on Two Broke Girls (CBS), and Charlie on Grace & Frankie (Netflix). He toured internationally with many theatrical productions and is a vocal arranger, producer and backup vocalist who has sung with the likes of Billy Porter, Grace Jones, Patti Labelle, Jennifer Holliday, Stephanie Mills, Debbie Gibson, Martha Wash, Barry Manilow, Glen Campbell, Johnny Cash and many more. He produces and directs the Miss New York Scholarship Competition and trains women for the Miss America Scholarship Competition year-round. He is an outspoken feminist and human rights enthusiast who has produced events and performed in events to raise thousands of dollars for charities throughout his career. Some of his favorite charities include Broadway Cares/Equity Fights AIDS, The Actors Fund, New Alternatives, The Ali Forney Center, The African Children’s Choir, and the Phyllis Newmans Women’s Health Initiative. His latest album, Slow Dancing with a Boy was released to Broadway Records on December 6, 2019, hitting number 19 on the iTunes pop charts upon its release.  Follow on Instagram @martythomaslovesyou, twitter @martythomasbway and read more at www.martythomas.com.

Marissa Rosen is a born and bred New Yorker who was most recently seen making her Broadway debut in For the Girls with the amazing Kristin Chenoweth! She can also be heard on the newly released album The Rocky Horror Skivvies Show.Off-Broadway: R.R.R.E.D., The Marvelous Wonderettes, My Big Gay Italian Wedding, Tony & Tina’s Wedding. Regional/International/Tours: A Taste of Things to Come, Jawbreaker, Priscilla Queen of the Desert, Grease, Legally Blonde, Bare and Into the Woods. She can be found singing and touring the country with Kristin and Jessica Vosk. Marissa works as a recording artist and backup singer/arranger for NYC and Nashville’s finest. She has had the great privilege of singing backup for Shoshana Bean, Patti LuPone, Betty Buckley, Frankie Grande and Lillias White to name a few. Marissa can be seen dancing alongside Anne Hathaway on the hit Amazon Prime series Modern Love, as well as Monk with Tony Shalhoub and if you squint real small, you can see her causing a ruckus with Lindsey Lohan in Just my Luck. She is a proud cast member of Marty Thomas Presents DIVA, along with Marty and some of the most talented ladies in NYC. Marissa is a huge advocate for Broadway Cares/Equity Fights Aids, where she is proud to have raised over $50,000 in her fundraising efforts. Marissa is so thrilled to be spreading holiday cheer with Marty.For my grandpa, forever in the front row. Follow along for shenanigans on instagram / twitter: @themarissarosen and read more at www.marissarosen.com.