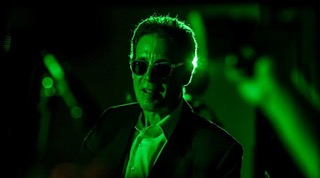 The band’s newest album, PGS 7, released in June 2019, is the group’s 7th studio album and features 12 new songs written and arranged by Robert which continue the musical diversity that PGS is known for, and including Robert’s first three political protest/message songs – “Redemption Road”, “Get Out!” and “Tree Of Life”. Adding to his musical signature of taking Classic Rock songs from the 1960s and totally “reimagining” them in the PGS style, PGS 7 includes Robert’s stunning take on Dobie Gray’s 1965 hit, “The ‘In’ Crowd”. The album has already been called “Album Of The Year!”

Originally formed in 2007, and re-formed by Robert in 2015, the band now consists of Robert leading a group of young, extremely talented, musicians from places such as Puerto Rico, Venezuela, Mexico, Canada, Brazil and Cuba, which Robert affectionately refers to as his “International Cartel”.

PGS has had a #1 Billboard album (Trippin’), over three million video views and was featured in an episode of the hit NBC series, “Lipstick Jungle” ft. Brooke Shields.

PGS has wowed audiences from Jazz to Rock, from Millennials to Baby Boomers, at festivals, performing arts centers and other major venues, in the U.S. and around the world, headlining and performing alongside a number of major artists, including Blues Traveler, Edgar Winter, YES, Boney James and Mindi Abair, and has cultivated a fervent, worldwide fan base.

Robert writes and arranges all of the band’s material, including vocal and instrumental originals. As noted, one of his musical signatures is to take Classic Rock hits and “reimagine” them in PGS’s unique style. He’s done this with Jimi Hendrix’ “Fire”, The Kinks’ “You Really Got Me”, Cream’s “I’m So Glad”, The Who’s “I Can’t Explain”, Dobie Gray’s “The ‘In’ Crowd”, and Phish’s “Free”.