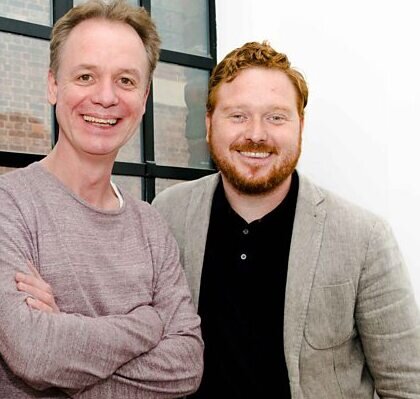 Thomas Aldridge and Jamie Ballard both star in The Tempest radio play. Thomas played Ron Weasley to Jamie’s Harry Potter in Harry Potter and The Cursed Child in the West End production before the shut down. The two gentlemen actually shared a dressing room are reunited for The Tempest. T2C talked to these brilliant actors.

West End vets teamed up with Broadway and Hollywood stalwarts in the fourth and final episode of  the all-free radio play production of Shakespeare’s The Tempest which airs Thursday, October 22nd at 7PM EST.

Did you know Shakepeare’s original first folio of works including The Tempest, just sold at Christie’s for a little under $10 million.

Produced by Jersey City’s Shakespeare@, the audio production is adapted and directed by Artistic Director Sean Hagerty, with original music and sound design, all episodes are available to download and stream at no cost.  Hagerty has crafted The Tempest into four weekly parts and partnered with the Emmy winning team at Sonic Designs to capture the lost art and thrill of radio drama.

Shakespeare@ made an auspicious live debut in 2019 with Hamlet starring Jonathan Forbes and released their first ‘radio’ play of the season with Richard II for their newly created Shakespeare@ Home this summer. To listen to The Tempest online, visit www.shakespeare-at.org. The production will also be available subsequently on Spotify, Apple Podcasts, Soundcloud, and Stitcher.

The performance is free to all listeners on all platforms.  Episode One,Two and Three of the Tempest, including past productions are also available.  In order to best serve quarantined audiences, Shakespeare @ has specialized, for now, on reviving radio drama and programming with Shakespeare@ Home.

Mr. Aldridge played Ron Weasley to Jamie Ballard’s Harry Potter in West End production of Harry Potter and the Cursed Child prior to the shutdown. The Tempest is an epic story of shipwrecks, monsters, and magic, weaving a timeless tale of revenge, redemption, and the power of forgiveness.  A masterpiece by William Shakespeare, The Tempest is celebrated for its universal themes of freedom and captivity, betrayal and compassion, and what is lost and what is found. First performed in 1611, The Tempest is believed to be the last play Shakespeare wrote alone.Shakespeare@ was founded to deliver accessible interpretations of classic works with a focus on international and cross-cultural exchange.

Its live performance debut, a lush 2019 production of Hamlet starring Jonathan Forbes, garnered rave reviews and was hailed as “theatrical perfection,” selling out its run at Grace Church Van Vorst in Jersey City.  Hagerty says, “After our 2020 season was lost, we re-structured our format to continue productions, employ artists, and serve our mission.” He conceived the all-sonic performance project, Shakespeare@ Home, to recapture the great heyday of serialized radio drama of the 1930’s and 40’s. Its first production, Richard II, was released July 1st, 2020. It received a wide and diverse listenership across the globe and is still available on Spotify, Apple Podcasts, Soundcloud, and Stitcher. Director Sean Hagerty said, “We decided to set the play when it was written, circa 1611. We’re doing that mainly through the sound design, but especially the music, which is all original and composed with Elizabethan and early Jacobean styles in mind, including the instrumentation.”Hagerty views The Tempest as remarkably timely.  He explains, “It is, at its heart, a morality tale about the perils of hatred, unfettered power, and revenge and the healing powers of redemption, mercy, and forgiveness, all couched in a magical, fairy-tale setting. In these dangerous and divided times, it strikes me as a fitting story.”The Tempest features original music composed by Joan Melton with sound design by Dan Gerhard and Ellen Fitton of Sonic Designs. Justin Goldner is the music producer and supervisor and casting is by Robin Carus. Sydney Steele is the Associate Producer.