Take a Gander at You Are Here 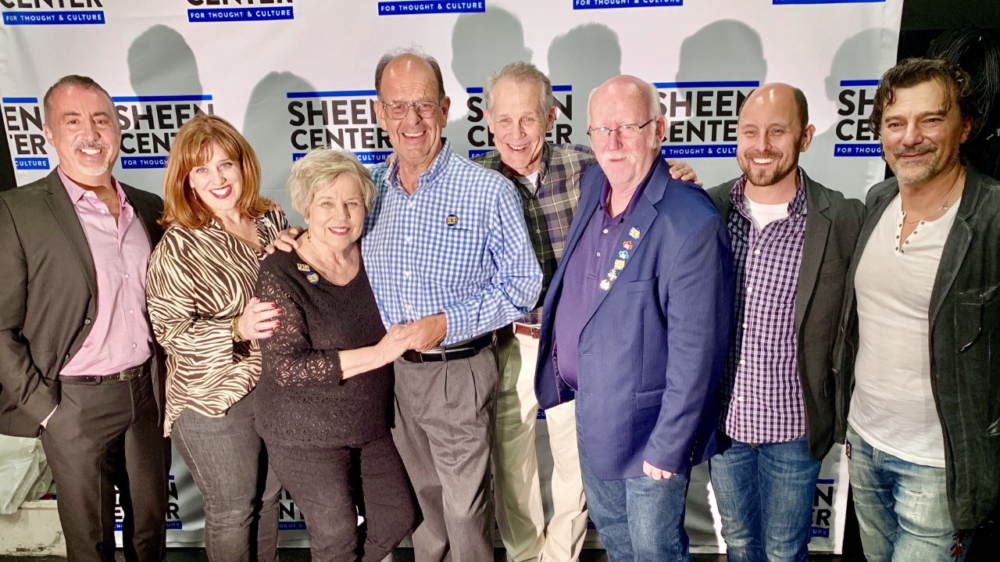 Take a Gander at You Are Here

On Monday night at the Sheen Center, a special preview presentation of a touching and heartwarming new documentary, You Are Here: A Come From Away Story, premiered. The film opens tonight on 800 screens across the country and was produced by Peter Gentile, with financial support from the Canadian government. Writer/director Moze Mossanen lovingly chronicles the experience of the passengers in the airplanes which were diverted to the remote town of Gander, Newfoundland in the immediate wake of the 9/11 tragedy, as well as the stories of all the townspeople who came to their aid over the next five days. It is a much-needed reminder of the goodness of the human spirit in our current times of political strife.

A post-screening discussion featured the documentary’s award-winning producer Peter Gentile; citizens of Gander featured in the film, Oz Fudge and Nick and Diane Marson and cast members from Broadway’s Come From Away. Presented by The Justice Film Festival and MDF Productions, this exclusive, advance screening at The Sheen Center’s Loreto Theater launched our remembrance of 9/11.

Anyone watching the two hijacked commercial jets crash into the twin towers of the former World Trade Center at the beginning of this film cannot help but re-live the terrible sense of loss and tragedy. But as the film points out, when a few people did some very bad thing, a whole community came together over the course of five days to do a very remarkable and good thing.

Because the American airspace was immediately closed to commercial aviation, all planes in the air at the time of the incident were forced to land at their nearest airports.  Thirty–eight commercial aircraft from around the world carrying  nearly 7000 passengers  were directed to land in rapid succession in the remote town of Gander, Newfoundland, the most northwesterly landing site on our continent.

The residents of this small town were used to no more visitors per day than moose or two. The realization that an influx of strangers was about to double the population of their town overnight would have given fainter hearts pause. But as the documentary pointed out, the rugged individuals who founded this community on “The Rock”, as they call it, learned early on that their survival meant banding together in crisis to support one another. So the citizens of Gander came together without hesitation to provide food, shelter, clothing, medication, and above all, love and comfort, to the distressed visitors.

The film focuses on a handful of passengers from the American Airlines flight piloted by Beverly Bass, the first female commercial airline pilot.  They include a gay couple who find acceptance they didn’t expect, and an American woman, Diane, who meets a British man, Nick Marson, to form a bond that blossoms into romance and eventual marriage. Not surprisingly, they returned to honeymoon in Gander.

The citizens of the town who tell the story include the affable mother figure, Buehla, a teacher from the Gander Academy which served as crisis central; Oz Fudge, the dryly town police  officer, the town’s stoic mayor Claude Elliott, the town veterinarian, Bonnie, who made it her mission to save the animals which had been all but forgotten in the cargo holds, and  Janice, a rookie TV reporter, who was thrown into a story a lot bigger than a cat stuck in a tree as her first assignment.

At every turn, the citizens of Gander came together with unfettered generosity to see to the needs of their visitors. The striking school bus drivers came off their picket lines to ferry passengers from the airport to the shelters. The makeshift kitchens staffed by sleepless residents made thousands of meals. A dentist donated hundreds of toothbrushes and toothpaste. A call for extra toilet paper yielded a year’s worth of donations.  When two truckloads of donated fruits and vegetables had nowhere to be stored, the ice rink in the community center was turned into the world’s largest refrigerator. When the makeshift bedding didn’t seem enough, citizens from Gander and the surrounding towns took in as many visitors as their homes could hold as their welcome guests.

Friendships formed in this crisis between passengers and Ganderites which have continued to this day, and which the documentary follows. Hannah, a woman whose son was a firefighter and first responder whose life was lost in the tragedy, formed a particularly lasting friendship with Buehla from the Academy, and the film follows it as Hannah awaits the eventually tragic news of her son’s death. But the cliffhanger narrative that keeps our heart’s attention is the budding romance between Nick and Diane. To see love bloom in the face of such loss and tragedy is wonderful indeed.

The film also follows the bond between the citizens of Gander and their visitors years later.  It shows the ten-year anniversary ceremony which Gander staged in memoriam in 2011. It also follows the Gander community leaders we came to know and love when they journeyed to New York City to attend the opening of musical base on the story, Come From Away, by Irend Sankoff and David Hein, which continues to play to standing room only audiences in five companies around the world.

The musical definitely deserves praise for how well it compressed and represented the actual events and individuals depicted in the film.  More interesting, the authors of the musical found points of tension which the documentary omitted.  A hurricane moving their direction could have grounded, or even destroyed, the planes if they didn’t take off in time. The documentary never even mentions that. A Muslim man who is looked at with suspicion and an African –American passenger who feared for his safety also added suspense to the musical.

The documentary is therefore deeply touching, but undramatic in a classic sense. Drama requires conflict and the people of Gander offered nothing but love and acceptance to their visitors.  I guess I can live without the drama, under those circumstances. I was happy, as you will be, just to be made to feel better about life.

Although they asked for nothing in return from their guests, the passengers left behind donations of nearly sixty thousand dollars in denominations from around the world, which funded a public park commemorating the event.

It’s sadly difficult to imagine that kind of response to strangers from any wealthy, major, metropolitan U.S. city.  Sadly, we just don’t have that sense of community, or homogenous values any more. But if the film expects us to learn any lesson from this experience, it is that we can be as generous of spirit as the people of Gander, if only we choose.

If you still need to be healed, because you were there, this film is the balm you need.  If you have children who were too young to have lived through the tragedy, be sure to take them to this beacon of light as their introduction to it.  There are so many important life lessons here, including how to kiss a codfish to become a true and honorary citizen of Gander.