Take Me Out Brings Heart, Soul and Intelligence to Broadway Take Me Out Brings Heart, Soul and Intelligence to Broadway

Tony Award winner Jesse Tyler Ferguson and Tony nominee Jesse Williams reprise their roles in this Tony-winning Best Play Revival, returning to Broadway for 14 weeks only! Bill Heck is now playing Kippy and the show runs through February 5, 2023 at the Schoenfeld. In honor of this Tony Award winning show returning we are re-running our review.

“The whole mess started with Darren, I suppose. After all, if he hadn’t done the thing, then the next thing wouldn’t have happened, or all the stuff after, and — but no, that’s not right. How could a “mess” have started with Darren?” Kippy in Take Me Out.

Richard Greenberg’s intelligent, heartbreaking play Take Me Out, is a witty, well written, humane look at all sides of betrayal,  bullying, loss and so much more. I will be thinking and contemplating about this play for weeks. Written over 20 years ago this play which won the Tony Award and the Drama Desk for Best Play in 2003, still holds up and seems even more relevant.

The play is about so many things and by the end of the play, Take Me Out, has so many meanings.

I have written this review in so many ways and I do not want to spoil anyone’s journey, so I am going to try and stay brief in the description, but to write about this show is to disclose its secrets. Take Me Out, is told mainly in narration and flashback. Kippy Sunderstrom (a charming and winning Patrick J. Adams) is trying to figure out how the situation at hand started. He tells us about his teammate and friend Darren Lemmin (a superb Jesse Williams), a biracial star of the Empire’s and of baseball. He can do no wrong in the eyes of the world. As the play starts Darren has announced to the world he is gay and the players feel Darren has violated their sacred space. In a flashback Darren is having drinks with his best friend Davey Battle (Brandon J Dirden), a religious player on a rival team. Davey tells Darren “until you love somebody … Ohh — you’re all sly, all quick-witted and mysterious — this is your aura. Polite but mischievous, that’s your charm. But until you love somebody, do you understand what I’m saying? You’ll never know your true nature that he should want his true nature known to the world.” 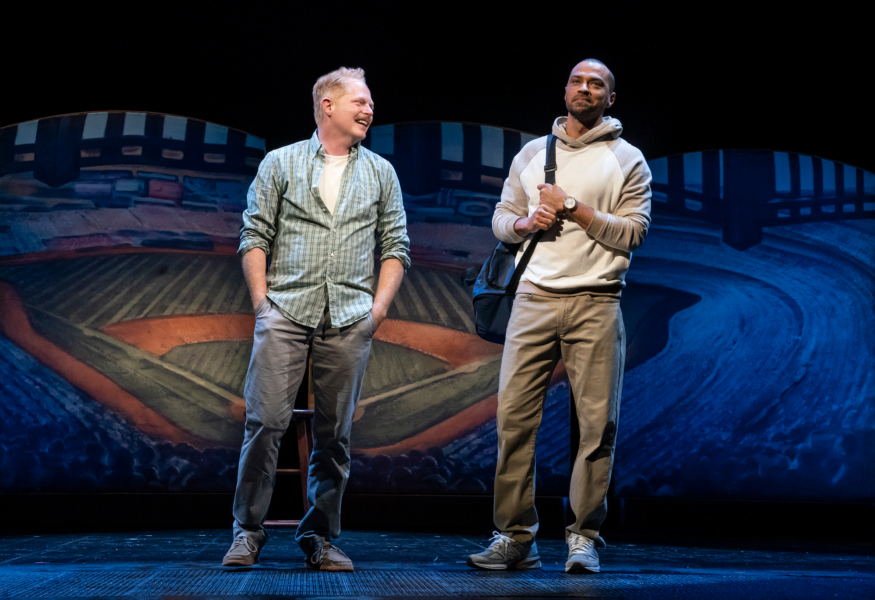 Back to present time Darren meets his new accountant Mason Marzac (a comedic Jessie Tyler Ferguson), a gay man who knows nothing about baseball until Darren came out to the world.

“a couple of weeks earlier I would have barely recognized the name! Then the announcement — that incredible act
of elective heroism — and it was as if I’d known him my whole life” Marzac When the Empire’s fall into a slump, they recruit a relief pitcher Shane Mungitt (a haunting Michael Oberholtzer). Shane is quiet, due to the fact he doesn’t really read or write and has been passed around. We learn that as a child, he was raised in orphanages. If that weren’t bad enough he watched as his father killed his mother and then himself in a murder-suicide. With Shane, the team begins winning games again, but they do nothing to include this misfit. Only Kippy shows compassion. When Mungitt expresses racist remarks on TV, he is kicked off the team.

A pretty funny bunch’a’ guys. Now don’t get me wrong. I don’t mind the colored people — the gooks an’ the spics an’ the coons an’ like that. But every night t’have’ta take a shower with a faggot? Do ya know what I’m sayin’? Shane Mungitt 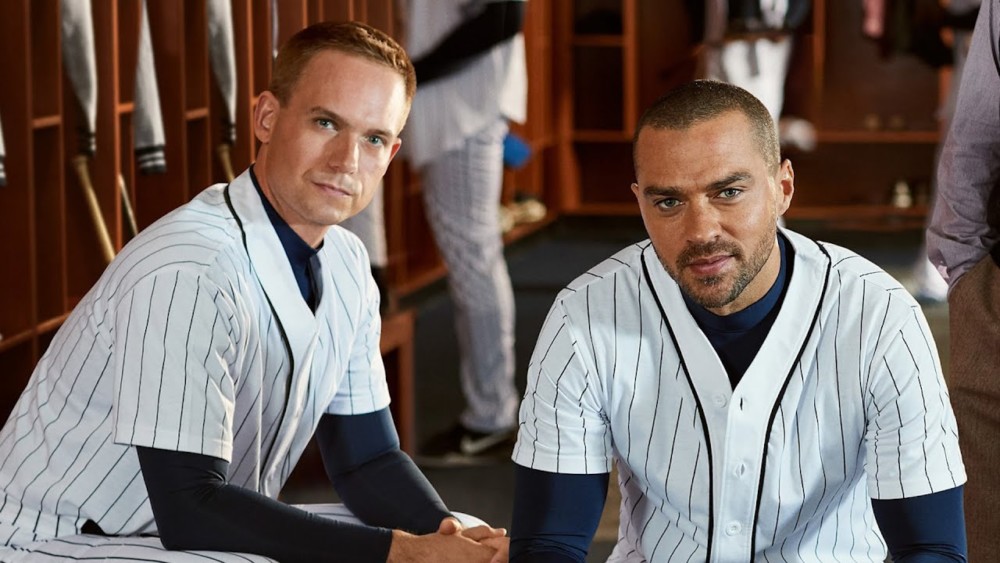 Now the team members includes ace pitcher Takeshi Kawabata (Julian Cihi) who doesn’t know a word of English, Toddy (Carl Lundstedt) and Jason Weeks (Tyler Lansing) two unintelligent racists teammates, Martinez and Rodriguez (Hiram Delgado and Eduardo Ramos), who mock their teammates in Spanish. Nobody on this team except Kippy shows kindness to the others. Darren though gifted, is proud, arrogant and is adamant that he wants life to continue as normal despite the homophobia of the locker room. Darren wants his team and the world to fear him and worship him. Nobody here is perfect.

As Shane is banned the team falls back into a slump. When Shane writes an apology letter that is leaked to the press sympathy shifts in his favor, except for Darren. He wants to retire in protest, but Marzac is now gaining baseball fever and stops it. On the day Shane comes back, so does Davey and nothing goes well from there. Secrets are revealed, friendships betrayed, damage from childhood are too embedded and the layers of heartbreak go deep. Only Marzac not only finds the joy of baseball, but in life. Life goes on, but not without scars and riffs.

Scott Ellis does a brilliant job as a director making us feel for all the lost souls of this play.

The set by David Rockwell, is like a shadow play that opens up to showers and the locker rooms of life.

The cast is wonderful and literally strip down to the barest of layers. Michael Oberholtzer is a revelation and so subtle in his portrayal of a man who never stood a chance and is so fatally flawed. Patrick J. Adams allows us to see the goodness in man and how the kindness of deeds can backfire. Jesse Williams gives us a coldness, an aloof persona that warms with acceptance, but it is Jessie Tyler Ferguson who gives us the humor, the hope and the joy of just being.

Take Me Out, will have your phone locked up, but your mind opened to the all flaws within us all.