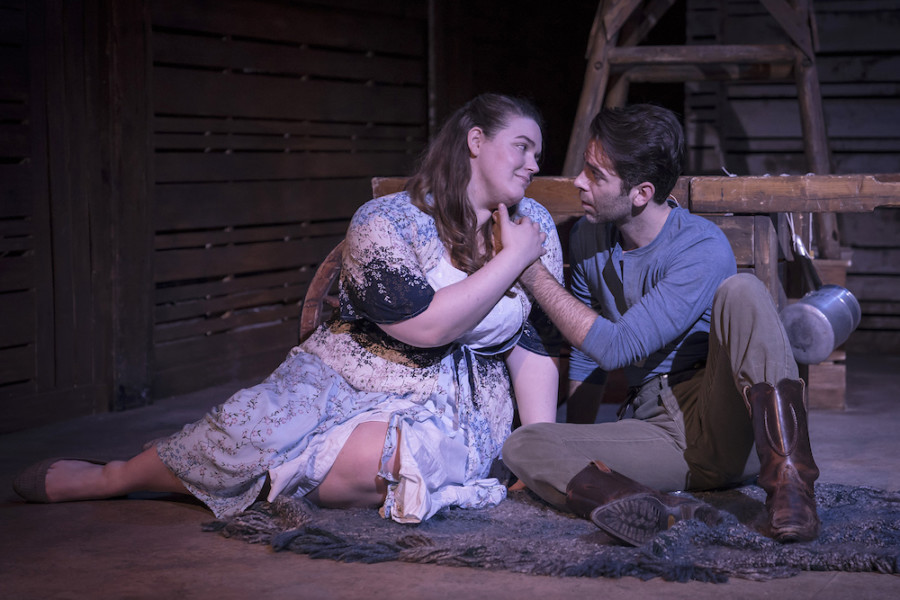 Talent Rains Down on 110 in the Shade at Boho Ensemble

Talent Rains Down on 110 in the Shade at Boho Ensemble 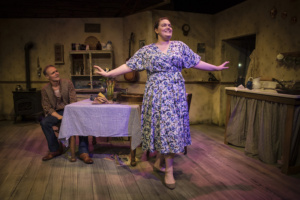 The joy of covering Chicago theater is as much about discovering talented new performers as it is about finding exciting new shows.  Ever since a handful of passionate college theater grads set the city on fire back in 1975 as the young Steppenwolf Theatre Company, Chicago has been a magnet for dynamic young actors seeking to hone their craft in the taut, intimate, powerful stage productions which define the aesthetic of this city’s theater community. One such rising star, Neala Barron, is filling the small Theater Wit stage with her enormous talent as the central character in the Boho Ensemble revival of one of my favorite musicals, 110 in the Shade, now through December 16. 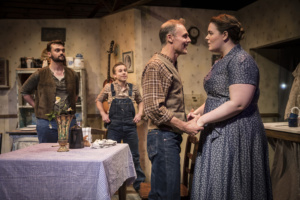 110 in the Shade is a heartwarming musical with music by Tom Jones and lyrics by Harvey Schmidt, authors of The Fantastics. The libretto is by N. Richard Nash based on his popular romantic drama, The Rainmaker. Maybe you’ve seen the wonderful film of that play with Burt Lancaster and Katherine Hepburn. 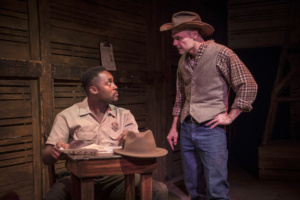 Both the musical and the play tell the same story.  In a small, southwestern town suffering from a terrible drought,  Lizzie Currie (Neala Barron) is a single woman of a certain age whose love life has also been one long, dry season. She lives with her father, H.C. (Peter Robel), and her two brothers, Noah (Billy Dawson) and Jimmy (Christopher Ratliff),  fearing she may spend the rest of her life unmarried and unloved.  The town Sheriff, File (Denzel Tsopgnang), would be a good match for her, but he is too closed off and bitter from having been left by his wife.  Besides, Lizzie is too smart, too direct, and too independent to make herself appealing to most men in a traditional sense. When a fast talking con man named Starbuck (Tommy Thurston) wanders into town and offers to bring rain in twenty-four hours for a hundred dollars in cash, H.C. pays the price, hoping that Starbuck will also bring relief to his daughter’s emotionally dry existence. 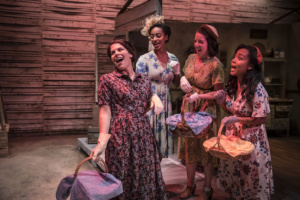 The role of Lizzie in this musical version of the story was created on Broadway by Inge Swenson, who was exactly the kind of Swedish bombshell you’d expect to have that name. I’ve seen two previous productions of this show with two other traditionally beautiful leading ladies of the theater, Audra McDonald and Marin Mazzie (recently lost to us), both dressing down to play a woman who believes she is just too plain to be loved. 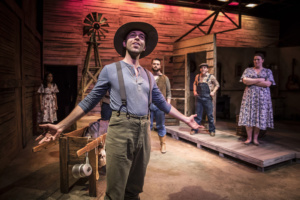 But Neala Barron really is the woman Lizzie is meant to be.  She’s too tall for most guys, too full figured to be a fashion model, to smart to be a silly flirt, and has an open face with an almost Amish simplicity, whose real beauty shines from within. Most musical theater leading lady roles are not written for actresses cut from such strong, homespun cloth. 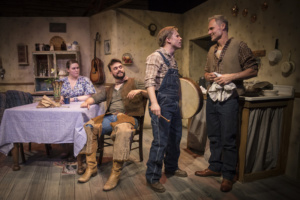 When Ms. Barron as Lizzie abandons all hope because she believes no one will ever find her beautiful enough to love, we believe she has truly known that feeling in her own life. When she later looks into the eyes of Starbuck, and sees herself reflected there, she blossoms into a woman whose real beauty runs deep as a river, and we believe that, too.

Ms. Barron takes us on the kind of journey of emotional truth which is fundamental to the Chicago theater style.  She also sings the heck out of this role, managing the difficult challenge of alternating between the colloquial, in the comedy number “Raunchy,” and the nearly operatic in her act one finale, “Old Maid”.  She captures the range of Lizzie’s emotions with the kind of invisible technique and utter conviction which is currently making Elaine May the toast of the town in New York for her heart-wrenchingly real performance in The Waverly Gallery.

Denzel Tsopgnang plays the emotionally repressed Sheriff File with a defensiveness balanced by just enough charm to make us root for him. However, Boho Artistic Director, Peter Marston Sullivan, who is also Associate Artistic Director at Marriott Lincolnshire Theater, makes the odd choice of opening the show with him polishing his boots in his dark office, rather than walking through the town under the blazing morning sun, and being greeted by the townsfolk who look up to him. This choice may emphasize his self-imposed sense of isolation.  But it doesn’t support the clear demands of the opening number to establish File as part of the town roasting in the relentless heat.

Tommy Thurston as Starbuck is not the ruggedly handsome, flashy con man one often sees in this role. This Starbuck is a scrappy desert rat, who enters dragging a small, drab pushcart that looks like it he stole it from Tevye’s barnyard, rather than the “bright, shiny wagon” that the lyrics say he commands.  That also is an odd design and directorial choice, which the actors try unsuccessfully to sell as sarcasm.  But the charm of Thurston’s performance is that he too rises above his situation, and transforms into something much bigger and better under Lizzie’s influence.

The role of Jimmy’s flirtatious love interest, Snookie (a pleasant Mariah Copeland) is normally cast with a dancer to support the dance break in their big number, “Little Red Hat.” In this production, they just chase each other around the dining table, which was a very unsatisfying choice. There also wasn’t any dancing in the lyrical picnic number, “Everything Beautiful Happens at Night.”  The non-dance movement of the ensemble in  Starbuck’s big number, “The Rain Song,” was the only real representation of the work of choreographer Aubrey Adams, and it didn’t seem like enough.

Musical director Ellen K. Morris consistently did a fine job supporting the singers and the mood of the show with her small ensemble.

Despite a handful of questionable choices, this  compelling production is a fitting end to Sullivan’s successful tenure as Boho’s Artistic Director.