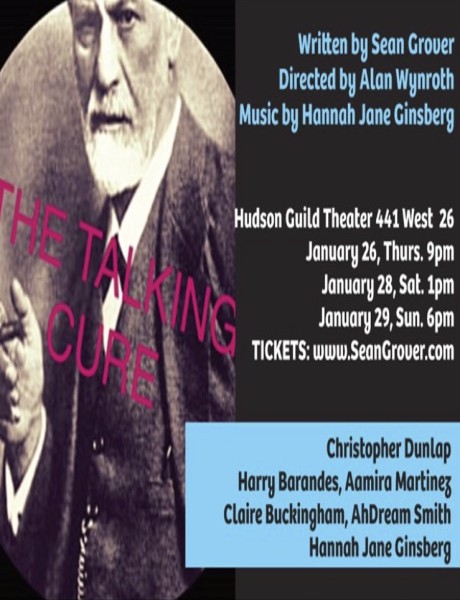 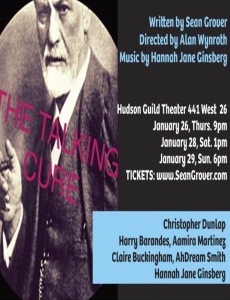 One of the entrée’s in the Winterfest at the Hudson Theatre Guild, The Talking Cure by Sean Grover, is an insightful look at how psychotherapists can have deep-rooted problems of their own. As Arthur (Josh Bouchard), the therapist in the play states “ Day after day after day, we lose ourselves in our patients. Living their lives more than our own. Solving their problems while ignoring ours.” We are watching Arthur’s breakdown through the eyes and lives of his patients and wife.

First up Gil (Harry Barandes), whose hang up is to sleep with married women, until he meets Monica (Claire Buckingham) his bosses wife who is insatiable and more unstable than she lets on. It turns out both are Arthur’s patients and part of the reason for the out of control spiraling.

Lucy (Aamira Martinez) hates to be touched and for good reason. She works in the sex trade, but it is a hands off situation, where she is in control. She has been forced to see Arthur due to an altercation. In the end Lucy and Arthur have more in common than they thought.

Natalie (Ahdream Smith) is a nurse who has developed lesbian tendencies and is here to get cured, as she can not handle this turn of events.

Melody (Hannah Jane Ginsberg) Arthur’s wife started off as a singer while settling has become resentful. As Arthur drifts off so does their marriage.

The cast is solid with the exception of Ms. Smith who needs to learn how to project. I especially liked the work of Ms. Martinez, Ms. Buckingham and Mr. Barandes. These three showed emotional depths that seemed to peel like layers of onions. Ms. Ginsberg has a really nice voice for jazz.

Mr. Grover’s writing cuts to the heart of America, though he needs to watch his past and present tenses.

In the end The Talking Cure is about loneliness and how we fail ourselves and others. This show is definitely worth seeing and developing.