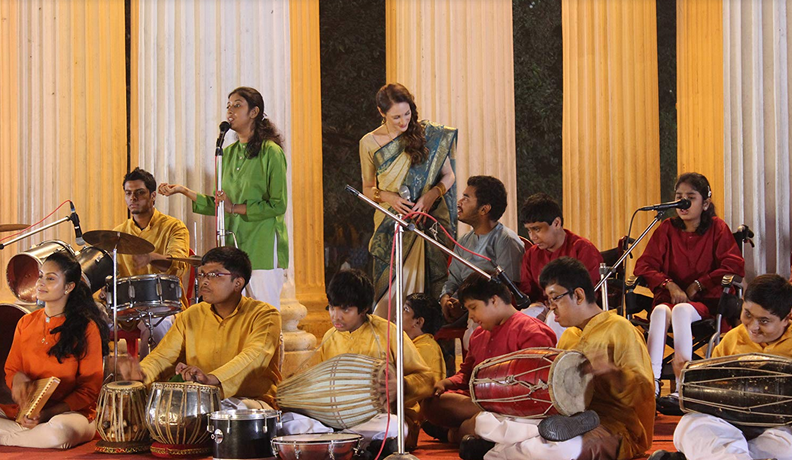 Art is meant to move people – to inspire them to find the beauty in life and the good of mankind. Actress Tamela D’Amico knows this and more from her latest project One Little Finger.

The movng film that consumed her life for the better part of two years unexpectedly taught her so much about people and purpose. Due to be released November 16th on all platforms, One Little Finger possesses a strong message of ability in disability.

Released November 16th, a national day of tolerance, One Little Finger will surely captivate the world with India’s vibrant visuals, a stellar soundtrack, phenomenal acting, and a message that umbrellas all of these aspects. Showing the world that people are not defined by their disability, One Little Finger employs actors who prove their abilities far outshine those of others.

With a cast of many talented actors, Sayomdeb Mukherjee and Abhinaya are just two who made the story come to life, working side by side with D’Amico. Additionally, One Little Finger employed over 80 people with disabilities, many of these being student musicians. D’Amico adds, “These amazing people studied their lines for six months and learned how to be real actors before we got there to film.  All of them were so happy to be there and to work. They were truly an inspiration to everyone.”

Filmed in India and the US, One Little Finger was written and directed by Rupam Sarmah and produced by Sarmah, in association with RJ Productions International and maZumba Media & Entertainment. One Little Finger also boasts some pretty impressive musical talent in addition to the phenomenal acting. The soundtrack line-up features the legendary Quincy Jones, Julian Lennon, and Siedah Garrett, just to name a few. And the title track “One Little Finger” is being considered for a Grammy.

While One Little Finger will certainly entertain an audience, D’Amico says it will also educate people about the abilities of those with disabilities. The film’s content and theme speaks to every vein of education. Music teachers will love it to reinforce that music is a universal language that brings people together. Regular education teachers will use it to enhance their inclusion, equity, and equality efforts. Social workers and special education teachers will gravitate to the message of ability in disability. And they will use the film to inspire their students to outperform their disability the way the student-actors do in the movie.

D’Amico, playing the role of Raina —  an American Neurologist researching music therapy in India —  had nearly the same revelations as her character while working on the film. Both were mesmerized by India’s brilliant hues and scenery and amazed by the true grit and talent of the actors with disabilities. Identifying with her character was essential; however, not even D’Amico knew the scope of its repercussions. It didn’t take long for her to realize that every aspect of One Little Finger had become ingrained in her. The result — her life would never be the same.

D’Amico’s participation in the project has quite a backstory worthy of sharing because it shows this film was her true calling. Before she even knew anything about the film, D’Amico experienced a vision she now believes was one of those unexpected events that shaped her life. While meditating with a friend at Lake Shrine in Pacific Palisades, CA, D’Amico received a colorful image of India’s gorgeous landscapes. After completing the meditation session, she told her friend she wanted to go to India. Two weeks later, D’Amico landed the role of Raina and was about to embark on one of the most wonderful experiences of her life.

Before landing this role, D’Amico cut quite a swath in the music and film industries. A jazz recording artist, D’Amico is heard on over 140 national radio and cable outlets. While music is still in her blood, she takes more time these days to hone her acting, directing, and producing skills.

Her formal education began at the prestigious Florida State University Film School, where only 16 students worldwide are admitted each year. D’Amico continued her studies at The Strasberg Institute in Los Angeles, where she was the first to build and shoot in their sound stage. After her schooling, D’Amico jumped right into the Hollywood life, working feverishly in all aspects of her talents, all while writing and shooting her own short films and web serials, racking-up Film Festival awards.

Even with One Little Finger nearly monopolizing two years of her life, D’Amico maintained other projects. You can find her acting in a slew of venues, including feature films such as Walt Before Mickey, a movie about the life of Walt Disney streaming now on Netflix. Now streaming on Amazon, she stars in the award-winning series Englishman in L.A., for which she was awarded “Outstanding Actress in a Comedy Web Series” by LA WEB FEST. D’Amico also stars in the Disney+ seriesBest Friends Whenever and a collection of upcoming independent films.

Because D’Amico’s talents have depth, she also remains active in the music industry. You can hear her singing the theme song “Love and the Gun” in both English and Italian for the feature film Rob the Mob, streaming now on all platforms. Besides her work in the film and music industries, D’Amico is a brand ambassador and content creator to many International brands, thanks to her social media influence.

And for Tamela D’Amico — her experiences while working on the film were one-of-a-kind and life-changing. As D’Amico moves on in her career to star in and direct many more films, she’ll probably never see the likes of another that hits right to the heart the way One Little Finger has done.

Suzanna BowlingJanuary 26, 2023
Read More
Scroll for more
Tap
History Into Theater: A Man For All Seasons
A Happy Home Away from Home at Southampton Inn