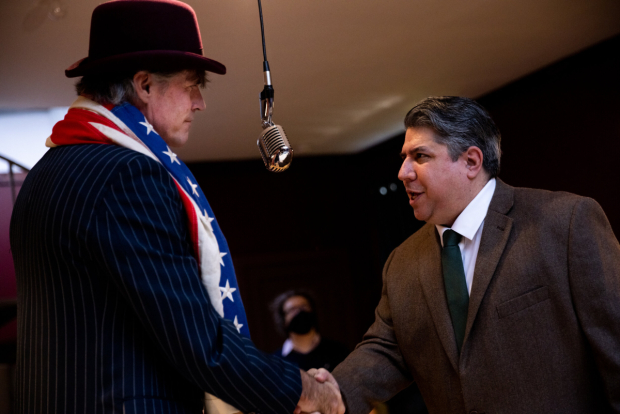 Do you know who JJ Walker was? I only knew who he was because of “Gangs of New York.” He was not the mayor in that movie. Jimmy Walker was NYV mayor in the 1920s I knew about Fiorello LaGuardia, because of the musical written about him and the only thing I really knew about Tammany Hall was that it was corrupt.

Tammany Hall, was founded in 1786 and was the political machine of the Democratic Party. It played a major role in controlling New York City and New York State politics. They helped immigrants, most notably the Irish, rise in American politics from the 1790s to the 1960s. Tammany Hall also served as an engine for political corruption.

Tammany’s influence waned from 1930 to 1945 when it engaged in a losing battle with Franklin D. Roosevelt, the state’s governor (1929–1932) and later U.S. President (1933–1945). In 1932, Mayor Jimmy Walker was forced from office when his bribery was exposed. Roosevelt stripped Tammany of federal patronage and Republican Fiorello La Guardia was elected mayor on a Fusion ticket and became the first anti-Tammany mayor to be re-elected.

Tammany Hall at the Soho Playhouse, 15 Vandam Street, takes place during that election. You enter on election night, November 2, 1929. While awaiting the results of the night’s big mayoral race. Jimmy Walker (JJ) (Martin Dockery), Fiorello LaGuardia (Christopher Romero) are introduced to us, as we are invited upstairs to Tammany’s club room. There you can buy drinks at an illegal Prohibition-era bar as you are coerced to vote for Walker by his Tammany Hall cronies Boss George Washington Olvany (Andrew Broaddus) and his deputy John Curry (Shahzeb Hussain). The politicians spar in boxing ring as we are asked to question the candidates. This is clearly JJ’s domain.

In the 1920s the Soho Playhouse was part of Tammany’s stronghold known as The Huron Club. There are a total of 15 different performance spaces, on my visit I only saw 5, so your experience and plot depends on who snags you.

You are led by a different characters each time and in my case for the most part, it was Kiki (Chloe Kekovic), who cast my friend and I in a backer’s audition for the new musical, Violet, a vehicle used for money laundering. The pianist Smarty (Sami Petrucci), led us to the Mayor’s Office and a secret room where we met Valentine (Natasa Babic), who we were told we couldn’t see, then backstage we overheard star Betty Compton (Marie Anello), the mayor’s girlfriend, cry over some kind of trouble, but what, we don’t know. We are also were asked to cast our vote for mayor, performed in Violet and had law informant agent Kressel (a fabulous Jesse Castellano) tell us how women were being exploited and entrapped.

When I got together with friends they had a totally different experience and had no idea about the crimes against the women. They were however fans of Legs Diamond (Nathaniel J. Ryan), who I saw nothing of and went to the top of the building.

Every experience is different, depending on which character you’ve chosen to follow who chooses you at each stop along the way.

Set designer Dan Daly and Grace Jeon’s costumes put us directly into the era and are well done. though I would have loved pieces of the history on the walls or in playbills, as unless you know about this time frame and these characters, you miss a lot. Emily Emily Clarkson lit the different areas to perfection.

Created and directed by Darren Lee Cole (Fleabag, Killer Joe) and Alexander Wright (The Great Gatsby, the UK’s longest running immersive show) it would have been nice to have more background and a storyline that was coherent to each playgoer. Though Tammany Hall is a lot of fun, I just wanted more information about the characters and plot.