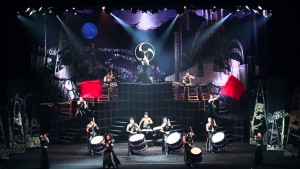 They are hard rock musicians, gymnasts, composers and more. The drummers of TAO come from all walks of life, but together they form a troupe that brings drumming to a new level. Packed with athleticism, precision and energy they bring to their fans 2 hours of non-stop drumming with a brief intermission. Their newest show TAO: Drum Heart combines the Japanese art of Taiko drumming with contemporary costumes and choreography. Amon Miyamoto, who helmed the 2004 revival of Pacific Overtures, directs. With Tao, Miyamoto reunites with his previous Pacific Overtures collaborators: costume designer Junko Koshino and set designer Rumi Matsui.

TAO started as a traditional Japanese drumming group 15 years ago in Aichi, Japan. After viewing a Cirque du Soleil performance, the group’s founding members decided to update the ancient art of wadaiko (Japanese drum) for modern audiences. A strict training regimen is essential to carry out the physical performances. The troupe starts each day with a 20K run, followed by a few hours of muscle training, and at least two hours of basic drum training. 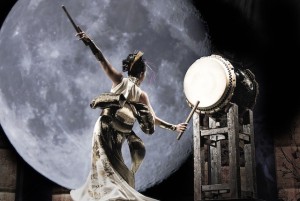 That story begins with a thunderous volcanic eruption that devastates the countryside. One of the few survivors is a young boy who is left trying to rebuild his village alone until he’s attacked by neighboring villagers seizing an opportunity to take the land. Then, a celestial nymph (played by  Arisa Nishi) appears and reasons with everyone to cooperate to rebuild their lives — which they do, exchanging their weapons for drumsticks in order to harmoniously play music together. The Goddess is played by a female drummer/performer Asuka Iwatani as she wows with grace. These drummers are bodies of perfection.