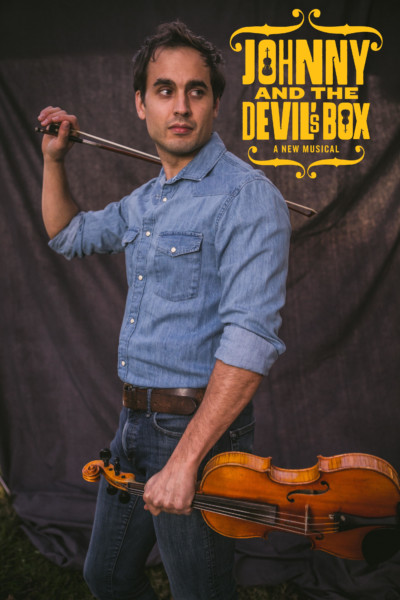 With book, music, and lyrics by J. Douglas Waterbury-Tieman (a member of The Lobbyists, co-writer of the Drama Desk Award nominated musical SeaWife), Johnny & the Devil’s Box tells the story of Johnny Baker, a young man who believes he’s the best fiddler that ever was, and aims to prove it. When Johnny meets the Devil at the Crossroads, which way will he go? Johnny & the Devil’s Box proclaims the immense power of music to heal broken communities and relationships when we put aside our pride and join hands in jubilant song and dance. The cast includes Ally Bonino, Annabelle Fox, Aaron Harrington (Rent), Rachel Potter (Evita, The Addams Family), and Douglas Waterbury-Tieman (The Robber Bridegroom, SeaWife). The presentation will be directed by Igor Goldin(Yank!), with music direction is by Stephen Elkins, music supervision by is Scott Wasserman, choreography is by Jennifer Jancuska, and dramaturgy by Anika Chapin.

Johnny & the Devil’s Box will be featured in Goodspeed Musicals’ The Worklight Series this spring, and has been developed in the Johnny Mercer Writers’ Colony at Goodspeed Musicals, the Drama League Rough Draft Residency, Belmont University Musical Theatre Program, and is the recipient of a Frank Young Fund’s Writers Retreat Grant with Goodspeed Musicals.

The new musical Burned has a book by James Armstrong, music and lyrics by Joshua H. Cohen (Tamar of the River), and is inspired by the play The Lucky One by A.A. Milne. Two brothers’ tense relationship comes apart when one of them is arrested for financial fraud and the other can’t help, or won’t. Set against the 2007-08 financial crisis,Burned asks what we owe each other, and what we are owed. The presentation will be directed by Aaron Simon Gross, with music direction by Paul Rigano, and a cast that includes Loni Ackerman (Evita, Cats), Alex Getlin(Anything Can Happen in the Theater), Amy Griffin (Dr. Seuss’ How the Grinch Stole Christmas), Taylor Iman Jones(Head Over Heels, Groundhog Day), Danny Harris Kornfeld (Renascence), Miguel Jarquin-Moreland (Jersey Boys), Daniel Plimpton (White Christmas), and Brian Charles Rooney (The Threepenny Opera). Songs from Burned have been presented by the In the Works series at The Duplex, and by Golden Fleece’s Saturdays at Square One.

The 70-minute presentation will begin at 7PM at Improv Asylum (307 West 26th Street) in New York City. Tickets are $20 in advance and $25 at the door, and can be purchased on New York Theatre Barn’s website:www.nytheatrebarn.org. Seating is limited. Jen Sandler and Sam Strum are the line producers, and casting is by Eisenberg/Beans Casting  (Daryl Eisenberg,CSA ; Ally Beans, CSA).