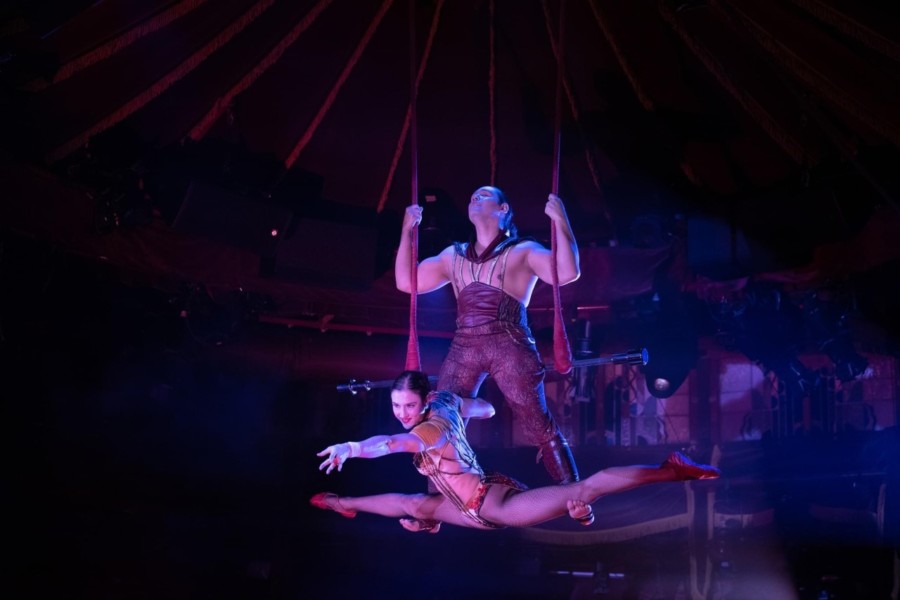 Equal parts sassy and sexy, the latest version of the Teatro ZinZanni, aptly titled Wishes & Dreams, is bringing much needed fun back downtown to The Loop. Set in an opulent Belgian mirror tent, carefully erected on the 14th floor of the Cambria Hotel, one will marvel at the setting. Lavish and luxurious, sumptuous dark mahogany wood floors, lush red velvet curtains, remarkable stained glass accents, no expense has been spared. The entire floor has been transformed for your viewing pleasure. Before finding your seat, shop the boutiques in the gallery of the lobby. Grab a drink from the bar and pose for a photo by the 9 foot crescent moon, all setting the preliminary mood for the night. And oh what a night. Dinner and a show, spanning nearly three hours, so plan accordingly. The subject matter does gets a little racy, but nothing too vulgar. The family of four sitting on my left giggled the entire time, although the littlest one was asleep in his mother’s arms by the show’s conclusion. 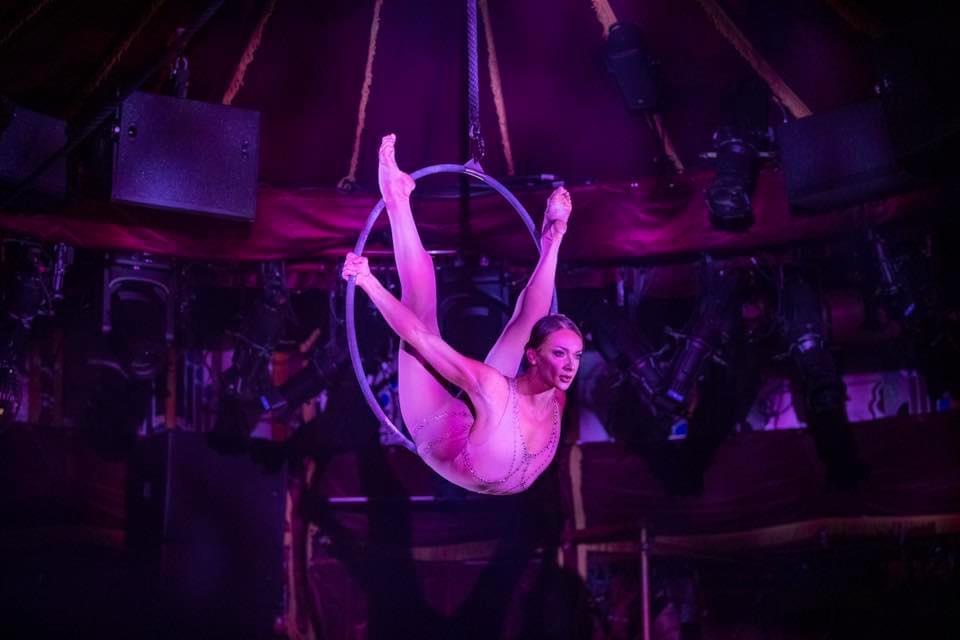 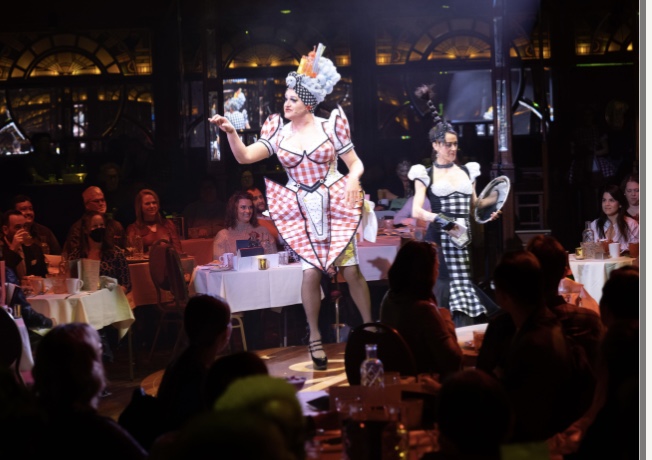 The new rebooted story is now set in the hustling and bustling restaurant of Madame Z, however the burlesque circus-style atmosphere remains intact. Remember, the show begins the moment you step in the tent and are shown to your table. Everyone is in on the act, from your servers to the center stage. Teatro ZinZanni Wishes & Dreams is directed by Tobias Larsson and his marks for the cast seem very loose. Debra M. Bauer’s costumes certainly leave an impression while also leaving very little to the imagination. Silk, leather, spandex and fishnets, it’s all there and more. Not for the faint of heart, the eye candy on display is quite decadent. Dreya Weber’s choreography resumé is mind-blowing. She conceived Pink’s 2010 high-flying Grammy Award performance of the song “Glitter in The Air”. She worked with Cher on her “Living Proof” tour choreographing the aerialists’ performances. Her shortlist of clients also includes Katy Perry, Taylor Swift, Britney Spears, Madonna, Michael Jackson and now she is bringing her impressive aerialist accoutrement to Chicago’s Teatro ZinZanni. 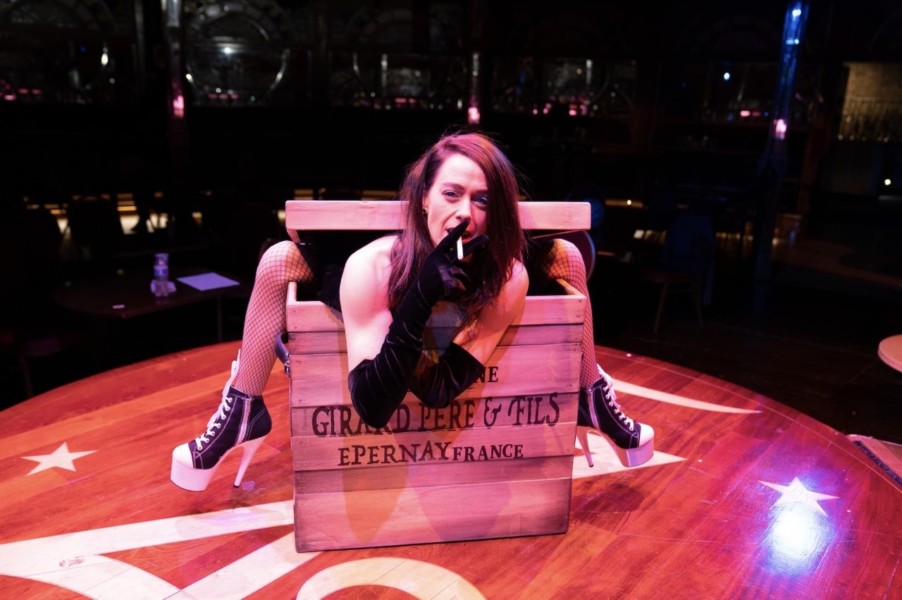 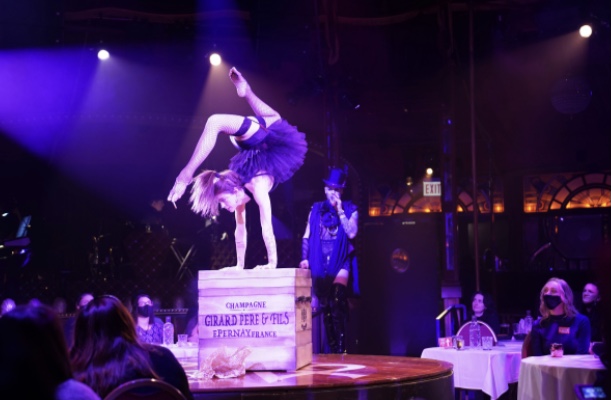 As for the show itself, it’s a cornucopia of well-sung cover tunes, comedy skits and globally talented circus performers. Think The Carol Burnett Show meets Cirque du Soleil, but on acid. “Head Chef” and Mistress of Ceremonies, the illusive “Madame Z” is played by Chicago powerhouse Bethany Thomas. This award-winning performer has been a bright spot across the Chicagoland theater scene for well over a decade. She has been featured in the Goodman Theater’s A Christmas Carol, Northlight Theatre’s Songs For Nobodies, Porchlight Music Theater’s Marry Me a Little and Writers Theater’s Into The Woods, just to name a few. A true “Broadway belter” every stage is lucky to have her grace its floodlights. She sounds fantastic, and certainly left the audience gleefully wanting more. For laughs, look no further than head waiter “Doily”, drag improvisational comedian, Kevin Kent, playing yet another in a long line of over-the-top female characters. Be forewarned, anyone in the front row is free game to be added to the festivities. Or chum added to the waters, depending on your point of view. The third headliner of the show, the motorcycle riding, leather clad man of mystery, “Phenix”. Michael Cuino is best described as the performance love child of Adam Lambert, Pink, David Bowie and Freddy Mercury. His “Phenix” high-flying howls captivate. Last appearing in the Windy City in 2018 Lyric Opera’s Jesus Christ Superstar as Pilate, his critically acclaimed performance stole the show in a cast full of scene-stealers. His complex vocal textures solidly on display. All rock n’ roll bravado, his steely sex appeal a welcome delight. 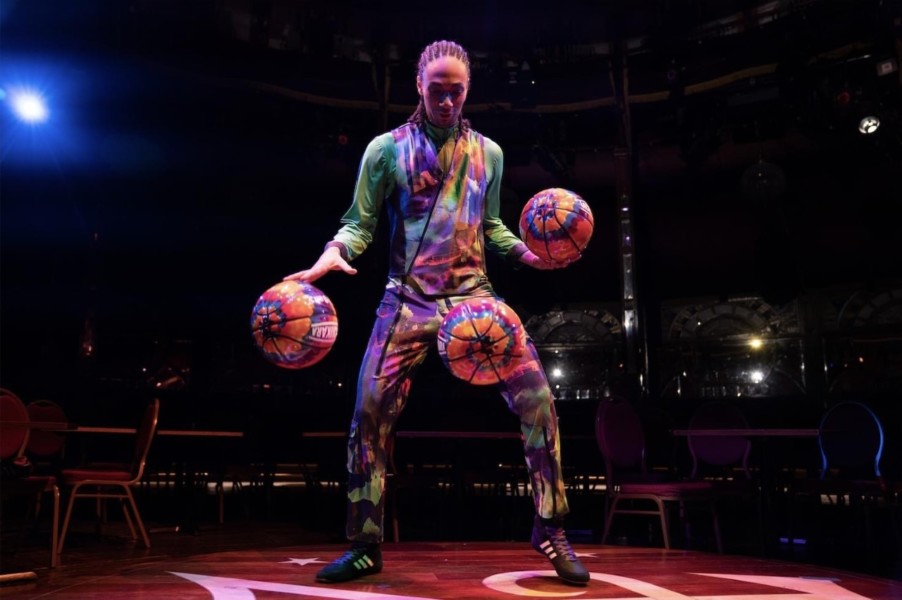 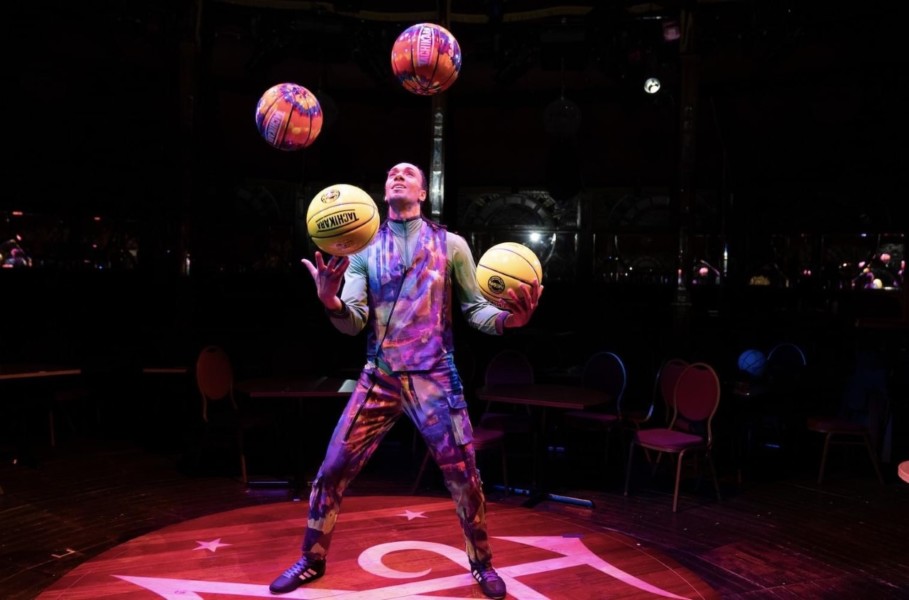 As for the “globally assembled” individual performers, spoiler alert, they are all the silly, slapstick employees, demonstrating center stage silliness before the show officially began. In the mix are “Sasha”, better known as Ukrainian Elena Gatilova. This Crimean, five-time national champion and rhythmic gymnast & aerialist is stunning, performing with power, grace and strength. Suspended at least a story above the audience, this is her ninth collaboration with Teatro ZinZanni since 2011. Gatilova is a proven fan favorite. Keeping his feet firmly on the ground, “Rafael” originally hails from Mexico. In fact, Noel Aguilar is a decedent of one of Mexico’s first Circus families and is an eighth generation juggler. His pedigree shows. Rounding out the early performers, “Shaquille” aka Michael Evolution, originating from the Netherlands and is a world class basketball freestyler. His high energy vignette, also a fan favorite. 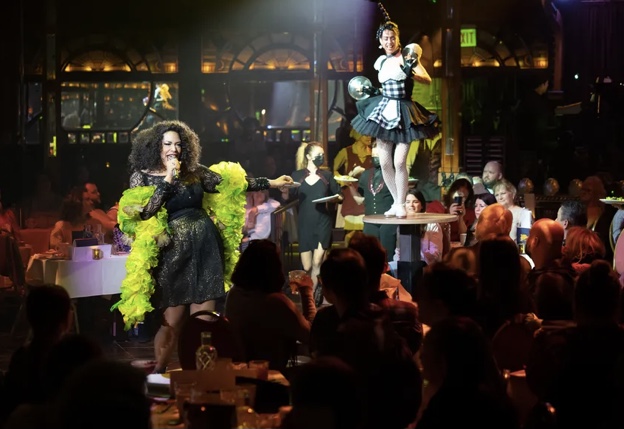 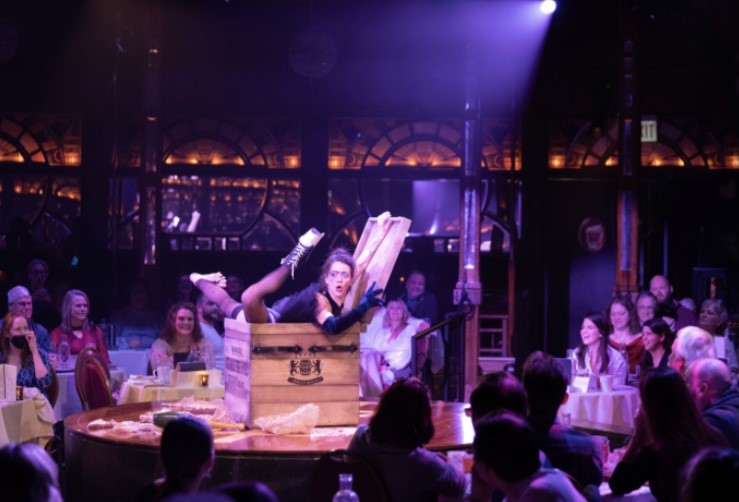 Quebec’s Margorie Nantel, make that “Marjo”, plays a chain-smoking klutz of a waitress. In reality, this acrobat has a solid global performing biography, but here, her contortion artistry is played strictly for laughs. The final couple “Duo Rose” are no strangers to  Windy City audiences. “Samson and Vivi” are actually Chicago’s own Sylvia Friedman and Samuel Sion. These trapeze stars have such an elegant and easy partnership. Their ariel artistry, a stunning combination of sophistication and grace, style and strength. Combined, there truly is something here for everyone to enjoy. If slapstick pratfalls are not your cup of tea, a few minutes later there is either a spirited song or exquisite aerialist to captivate. 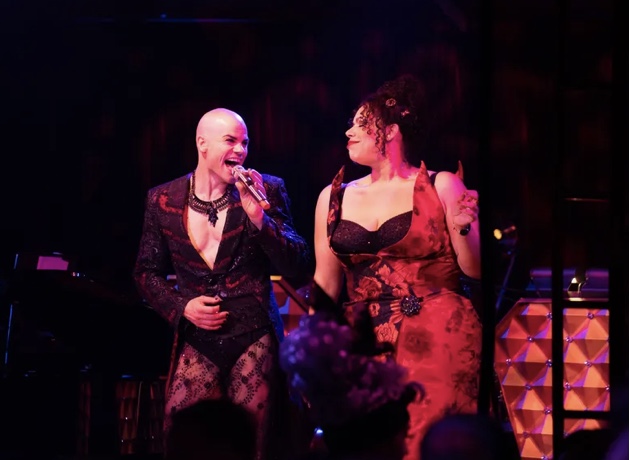 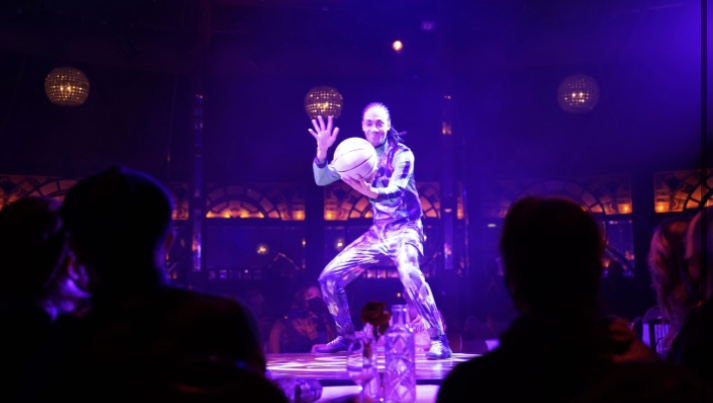 In the corner of the Spiegeltent ZaZou, a live band every single night. These musicians are also a who’s who of instrumentalists. Jon Negus pulls double duty as the musical director and playing woodwinds. Conductor Kevin Disch is also the band’s pianist. Drums and percussion are the dapper Jose Martinez’s contribution. Taking a break from his work on Broadway, playing music from Wicked, Hamilton and Jersey Boys as well as touring with the likes of Aretha Franklin, Bill Withers and David Sanborn, bassist Chuck Webb brings his signature cool timing and tone to the band as well. By the show’s conclusion, a lively cast and audience sing-a-long of Prince’s “Let’s Go Crazy” everyone willingly surrendering to the chaotic majesty of all things Teatro ZinZanni: Wishes & Dreams. 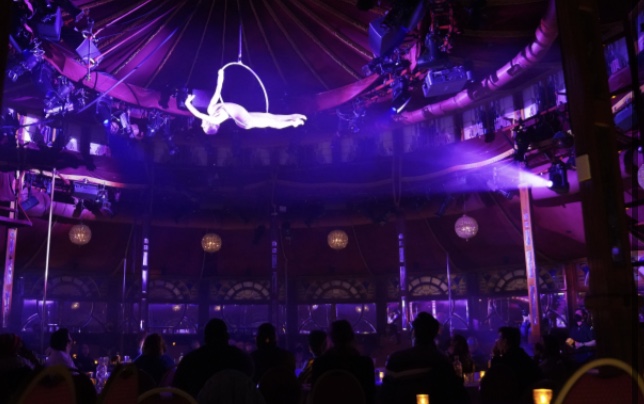 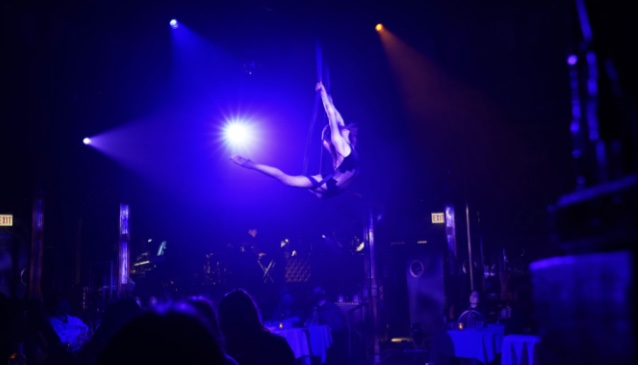 As for the food, Debbie Sharpe, is “The Goddess” in The Goddess and Grocer. Advertised as a “rock n’ roll caterer, she has spent years feeding a litany of the rock world royalty. Some quick namedropping includes members of The Rolling Stones, Fleetwood Mac, U2, Paul McCartney and Madonna. Planting her roots in Chicago, she is bringing her signature style to providing great tasting food and top notch service to the masses. Perusing the menu, enjoy a signature cocktail or two, including the “ZinZanni Old Fashioned”, “The Show Must Go On”, ‘Madame Z” and the “Doily Drop”. For those a little less daring, there is also a solid selection of beers and wines. The multi-course menu includes an array of appetizers and nibbles including Lump crab cakes, baked goat cheese, roasted beet & candied walnuts, shrimp rigatoni mezzi, braised pork shoulder agrodolce and wild mushroom risotto cake. For those who wish to indulge their sweet tooth, the ZinZanni cake slice, featuring layers of red velvet, chocolate and golden vanilla cake with butter cream and black chocolate ganache or the iconic Goddess rainbow cake slice, a six layer vanilla cake with vanilla meringue buttercream frosting. Both are crowd favorites. 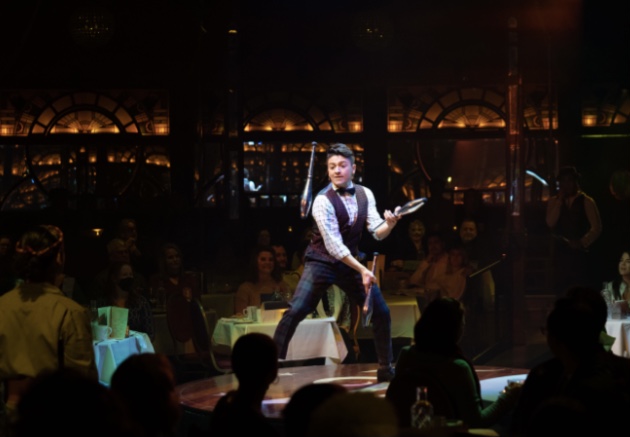 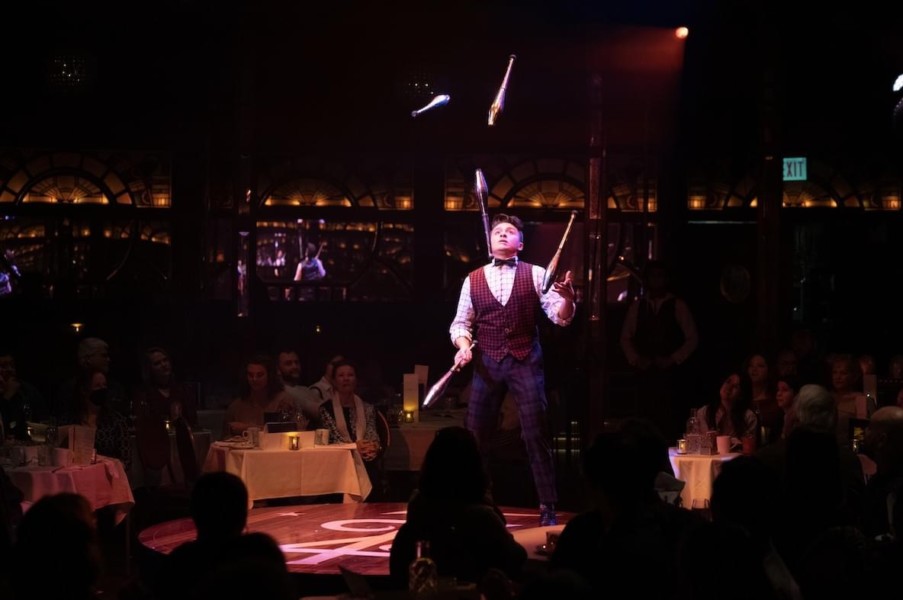 At the Teatro ZinZanni you can arrive solo, as a couple or book a group party. All are welcome, but do make your online reservations first. They routinely sell out, so secure your reservation now. Arrive early if you can to soak up the entire atmosphere of this unique experience. There isn’t another show currently playing with this much interactive grandeur on display. Do come to play as audience interaction is both essential and encouraged. 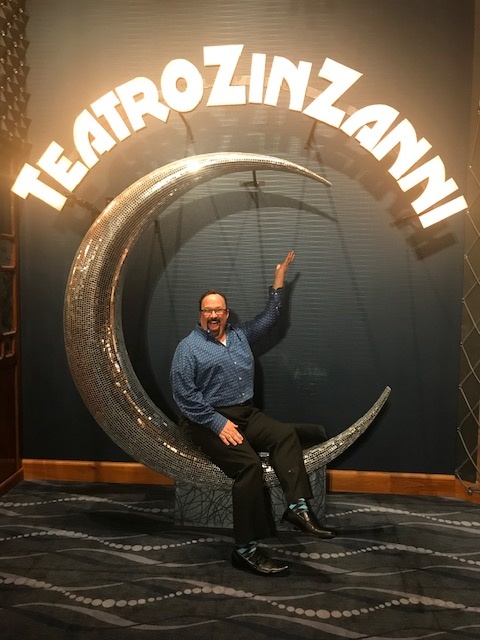