Tech Support is a Charming Look at New vs Old 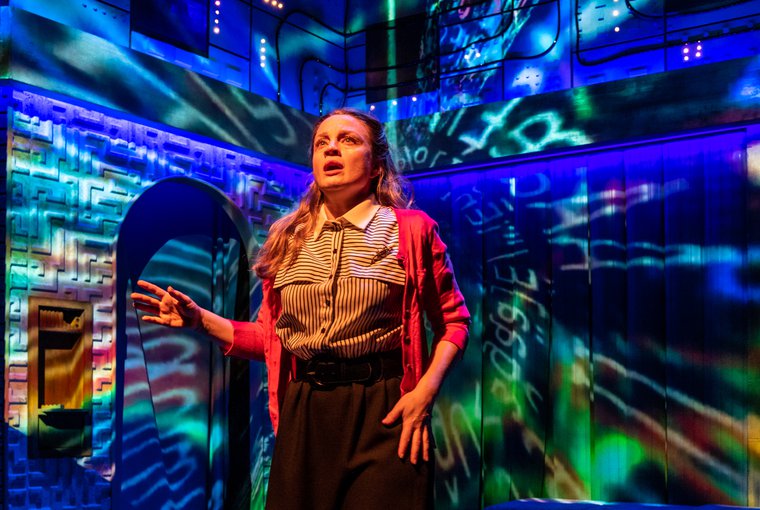 Tech Support is a Charming Look at New vs Old

Last night at 59E59 Theatre’s a charming lighthearted look at how technology has overrun our lives and our souls opened in the form of Tech Support. Written and directed by Debra Whitfield, this play felt like a 1940’s romantic comedy, where love always saves the day.

We first meet Pamela Stark (Margot White), an antique book seller whose husband has just texted her their divorce papers, as all the technology in her apartment are going haywire. Needing assistance with her printer, she calls the tech support guy, “Chip,” who suddenly send her into a different century.

Her first destination is the 1919 where women are looking for the right to vote and abortions can lead to death. A pregnant Maisie (Leanne Cabrera) is talked into having her child with “Chip” (an adorable Ryan Avalos). Having accomplished her mission, Pam is sent to 1946, where the man who runs the boarding house (Mark Lotito), has married Grace (Lauriel Friedman), who is now a councilwoman. Here she meets the child “Chip” she saved from the past and in a May/ December romance falls in love with him and he with her. She also saves the marriage of a husband felt left behind, due to his wife’s ambitions and women gaining the power to work after the war.

Sent into 1978 “Chip” is now working on Grace’s mayoral campaign and has not gotten over his love for Pam. Now the ERA is at stake, but of course even now only needing one state to pass this right for women, is on the back burner. He has embezzled funds and has let his life go down the drain. When Pam explains why she had to leave, he does not believe her. Before she can save “Chip”, she is sent back to her own time, but like all good romantic stories, a happy ending sends Pam back into time not only save her life, but that of “Chips.”Pam’s last rescue is her own.

The cast is extremely talented with Ms. White leading the way. Her chemistry with Mr. Avalos, makes us root for this couple the whole way through. Mr. Lotito’s comedic transitions of all the men who own the boarding house is amusing, as he embodies the era’s transitions.

The set by Natalie Taylor Hart, is clever and really uses the space perfectly. Also the projection design by Elliott Forrest, sound design by Ed Matthew and lighting design by Deborah Constantine are well done.

This production is done by the Chatillion Stage Company, whose play Fire also gained a rave review. This company really puts on well thought out plays that embrace the past.

What makes Ms. Whitfield’s play so charming, is that it blends old philosophies with new. Her direction, as well as her writing makes this a piece that takes us out of our present day drama and allows us to escape if just for an hour and 20 minutes.